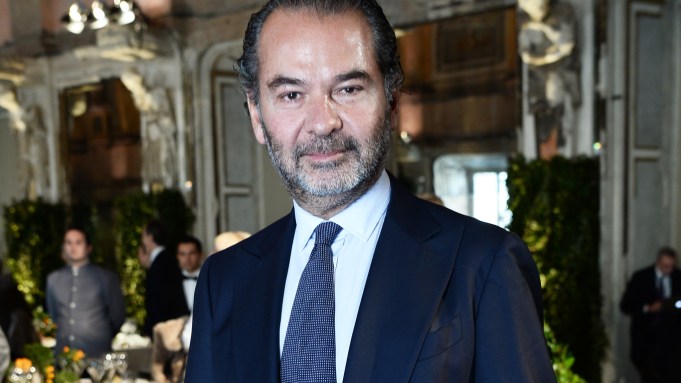 MILAN — All good things must come to an end.

Behind this tried-and-true Geoffrey Chaucer proverb lies Moncler’s change of strategy. The last Gamme Bleu and Gamme Rouge collections, designed by Thom Browne and Giambattista Valli, respectively, were presented for the spring/summer 2018 season.

“Every company must innovate and it’s a choice shared 100 percent with the designers,” Moncler chairman and chief executive officer Remo Ruffini explained in a phone interview on Saturday. “I need to create a new project that will bring new energy to Moncler. It was a very difficult decision, stemming from the need to evolve, to create a solution that would naturally create a new and alternative project to one that was launched 10 years ago and was feeling somewhat dated.”

Ruffini praised the designers’ commitment to the collections and defined Browne and Valli as “two geniuses each in their own way. The creativity and surprises Thom produces are unique in the world, and his excellence, there are few that would contest this. And Giambattista’s elegant and modern vision is unique. I have always admired his style. Each is a number one.”

With the aim to commit themselves to their respective namesake brands, both Browne and Valli “entirely agreed” with Ruffini on the decision. “It’s been a great run, and lots of fun for so many years. But, as we defined a new growth strategy for the Thom Browne brand, I have realized that my focus should be on my own business,” explained the designer. “The fact that this happened when Remo was starting to rethink Moncler’s future made our decision mutual and effortless. I wish to thank the teams who made things happen, together with Remo, who through the years has allowed me complete creative freedom.”

Browne has been expanding his retail footprint, opening his brand’s first European store in Milan in April, followed by a unit in London in June, in the wake of Sandbridge Capital’s acquisition of a majority stake in the company in May 2016 from Japan’s Stripe International. Stripe retains a minority stake.

Expressing his pride in contributing to the success of the brand, Valli said that “conceiving the wardrobe of the Moncler woman and infusing it with the Valli DNA was a real challenge. It brought creations for every moment of her life, from a morning in Gstaad to an evening at the Met Gala in New York. I want therefore to thank Remo for his foresight in choosing me for this exciting project and his support throughout these 10 years where I was able to build a team and bring to life unique collections under the Moncler Gamme Rouge label.”

Ruffini underscored that “it’s not that we don’t want to participate to the world of fashion, but we are obliged to give new energy to Moncler.”

Asked to elaborate, Ruffini kept his cards close to the chest, but said that, starting in February, he had “a project in the pipeline that I believe will be very innovative for the sector and will bring new emotions.”

While the two labels have allowed the company to be part of the international fashion weeks, Ruffini first hinted at a possible change of course in a WWD CEO Talks last June.

”This market needs its own strategies. The customer is tired of these ratified fashion caravans,” said Ruffini at the time. “Yes, what we do for the industry is important, it gives prestige, but I strongly believe that we must be closer to consumers, remove the filters between us and the customer. I don’t know how many of our customers even see our shows. We must find new ideas, and each brand must have a strategy closer to its own identity, while everyone, from sports to couture, follows the same strategy.”

Responding to a question about whether he was revisiting the format, Ruffini said at the time that he was working on finding “an approach to our communication in sync with our DNA.”

While the company does not reveal figures for the two lines, the executive said he was very pleased with the performance of both. “They were doing very well, they have been super-strong.” He emphasized the brands’ very selective distribution and niche positioning. The lines are available at 150 doors of specialty stores and in 45 directly operated Moncler boutiques.

The Gamme Rouge project took off in February 2006 when Alessandra Facchinetti was appointed creative director. Valli succeeded Facchinetti in 2008, launching his first collection for the label for fall 2008. The Gamme Bleu brand was conceived as the male counterpart to Gamme Rouge, and Browne unveiled his first designs for the label in January 2009. He blended his sartorial touch with Moncler’s sporting spirit, extending his theatrical creativity to the brand’s shows. Last January, for example, he created a set of winter wood with pines, birches and artificial snow celebrating the art of hiking, with ropes wrapping and connecting the models, but also as the main motif printed on many of the pieces. In June, the set at first glance presented pine trees and snow, and beyond the pines were palm trees — and the snow had become the illusion of white sand — targeting customers in both Hemispheres.

Valli staged what was to be his last show at Moncler Gamme Rouge in October at the Grand Palais around dozens of glittering disco balls, large and small, with a ballet company that performed hip-hop on pointe to Ed Sheeran’s “Shape of You.”

“There were beautiful dresses in soft pink and white lace, tulle slipdresses worn under embroidered robes and boleros — all delicate, ethereal and pretty,” WWD said at the time.” But the stuff that resonated most was the fancy athleticwear, the red-white-and-blue striped tulle bomber and a white robe-like windbreaker with lace inserts.”