Chairman and ceo Remo Ruffini revealed the new chapter of the project also includes a suitcase with Rimowa and an e-bike with Mate.bike.

By Luisa Zargani and Samantha Conti on February 3, 2020

MILAN — “We have a global consumer and now we want to give a voice to that consumer.”

That’s how Remo Ruffini, chairman and chief executive officer of Moncler, presented the third cycle of the Moncler Genius project in an interview with WWD. This time though the company is exploring new territories beyond fashion, working on an innovative product with Rimowa and confirming a collaboration with JW Anderson.

WWD was the first to report in September that Jonathan Anderson, founder of the JW Anderson brand and creative director of Loewe, could be among the designers in Moncler’s newest lineup of collaborations.

“This is the next step for Moncler Genius, one that I have worked on for more than a year and a half, it’s very dear to me,” Ruffini confided.

Elaborating on Rimowa, Ruffini said, “This is a very, very interesting conceptual and communication project that allows consumers to talk with the whole world.” While conceding it was difficult to describe the product to someone who has not seen it, he said it is “a suitcase that has visual communication tools. Consumers will be able to have conversations that will not be only virtual but also physical, and when they travel through airports and carry this suitcase, it can be seen by other consumers.”

The reasoning behind this new product, invented with Rimowa, is that the Genius project “is evolving. My initial idea was to find creative talents that would bring a lot of energy to the brand and give voice to the roots of the brand — after all, our motto is ‘One House, Different Voices.’ Now we are giving voice to our customers. We can create a dream and have the energy tell a story, it’s a fundamental point,” Ruffini said.

The new developments will be presented at the Genius Building in Milan on Feb. 19 during Milan Fashion Week and then on the following Sunday to consumers, as Moncler did last year.

“Rather than for publicity, [the suitcase] is an expression of our consumers, who can communicate content with the same attitude and approach they have online but not in a virtual way, by building a social network, in a dialogue with an expanded community,” he said, emphasizing the technology and innovation of the object, the price for which has not been established yet. “We’ve had excellent results with Genius also at wholesale, and now the dream is for our millions of consumers to be able to be part of the community and talk with one another.”

Ruffini then went on to praise Anderson’s creativity, acknowledging the designer’s success with his own brand and with Loewe, and emphasized his “very different approach toward luxury compared with other designers — let’s call it more pop, which you can see from the different layout of his stores and type of products, his attitude as a person. It was intriguing for me to have him in the team.”

The injection of Anderson’s products, which Ruffini said can be used by both men and women, and are “very simple in terms of design but very strong in conceptual terms,” will help Genius evolve with a new distinctive voice that will “not cannibalize” the collections.

For the time being, Anderson has designed one collection for Moncler Genius, but Ruffini said “we keep the doors open, we fine-tune and decide as we go along. We want to give continuity to the project, bringing loyalty to the brand, in a dialogue with all generations.”

“I really admire what Moncler has achieved with Genius and with the brand as a whole, how they articulate technology in a revolutionary way,” Anderson said in a separate interview. “It’s just incredible, and I’m really excited about it.” 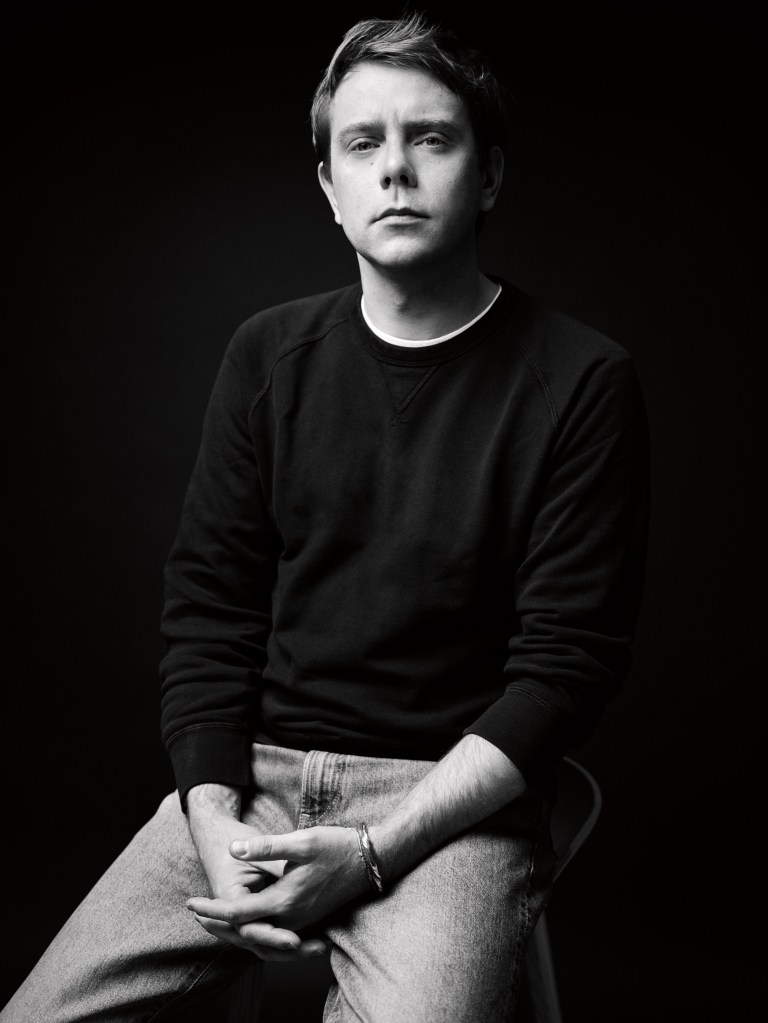 Asked about his approach to the collaboration, Anderson said he was thinking about the concept of an “inflated archive” as well as exaggerated shapes and the DNA and milestones of the brand. He said he was using the Moncler quilting on the inside of bags, for example.

He said the craftsmanship and know-how at Moncler were incredible, and that the company’s team’s skills “are on another level, and they have an effortless approach to design. Anything is possible with them, and the level of quality is crazy.”

As an example, Anderson said he worked with them on using a chain link as a popper on some of the pieces. As for the quilting inside the bags, he said he’s been able to create a puffer within the body of a bag, which gives it a shape and creates volume. It looks effortless, he added, but it’s quite a complicated construction.

Born in Northern Ireland in 1984, Anderson is known for his provocative and androgynous designs. He studied men’s wear at the London College of Fashion, graduating in 2005, and launched his JW Anderson fashion label in 2008. Previously, he has collaborated with Converse and with Uniqlo.

Surprising is the new agreement with Mate.bike, which is yet another way to explore other sectors beyond fashion, with “design content, technology and a strong concept,” said Ruffini, offering Moncler’s customers a different experience. “As a user myself, this e-bike allows you to do sports and to reach heights, the tip of mountains and destinations that were impossible to reach before, allowing to feel sensations and see views that were unthinkable,” Ruffini said. The presentation will be in an industrial site in an existing building, and Ruffini hinted at a tower structure made of bicycles “the color of snow and made for the snow.”

It is undeniable Ruffini’s decision to start the Genius project in 2018 was followed by a wave of capsule collaborations and drops conceived by other fashion brands. Asked about this trend, he said he was “very satisfied” with Moncler’s new course. “Three or four years ago, I myself was tired of our traditional strategy. Today I feel I am part of a modern and contemporary company, unique and with lots of energy. I think that a brand such as Moncler needs this kind of strategy, it’s inevitable if you want to continue to be winning. If others do it, too, it encourages me even more, it means that our strategy is right, but I don’t have to look at my competitors. If I succeed in the future it’s because I will have succeeded in creating and managing a unique company. The important thing is that I have the possibility to evolve this concept. I believe this is a new way to work, with Genius we changed the way we work.”

Ruffini has over the years driven Moncler’s growth by forming close relationships with designers from Nicolas Ghesquière to Junya Watanabe, Giambattista Valli, who designed Moncler Gamme Rouge, and Thom Browne, who was in charge of the Moncler Gamme Bleu line for men. After 10 years of a successful run with the latter two projects, Ruffini overturned the company’s business model and strategy, launching Moncler Genius in 2018, a series of drops and capsules with designers ranging from Pierpaolo Piccioli to Simone Rocha and Craig Green, to name a few.

According to the Moncler Genius business model, each collection is released singularly through monthly projects, both physical and digital.

Moncler will release its 2019 sales and profits on Feb. 10 and is in its black-out period, but Ruffini in any case wanted to speak more about how Genius “created value” for the brand, increased its awareness with consumers, who are eager to find out about the next chapters of the project, he said, which is about “quality, not quantity. We don’t want to grow Genius too much, the spirit is to create emotions and curiosity with new monthly content. I feel the brand is more respected now and that we interact with a younger customer, although we don’t concentrate on that alone, we speak to all generations.”

He conceded the move “was risky” at the beginning. “The company was already faring well, but I am happy of the choice we made.”

Milan’s House of Genius pop-up store in Galleria Vittorio Emanuele II closed at the end of January, and Ruffini was proud to say that, since its opening in November, it attracted more than 100,000 visitors — “almost like a museum. I am very satisfied, independently from the sales, it signals that this is the right path.” While a permanent Moncler banner is expected to replace the pop-up, Ruffini admitted the timing to receive permits in the storied and protected luxury shopping arcade is “very long,” and that he was thinking of “another project” for the location as Moncler waits for the green light to proceed with the works.