Sources estimate that, if listed, the group could be valued at about 1.1 billion euros, or $1.5 billion at current exchange rate. 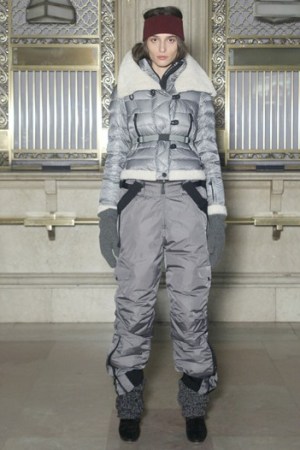 MILAN — Moncler Group is revving up to launch an initial public offering in the first half, possibly in June.

According to sources, the Italian company has tapped Banca Imi, Morgan Stanley and Bofa-Merrill Lynch as global coordinators. The plan is to float up to 50 percent of Moncler on the Milan Stock Exchange.

In addition to the Moncler brand, the Moncler Group includes high-end sportswear labels Henry Cotton’s, Marina Yachting and Coast, Weber & Ahaus, and it holds the license for Cerruti. The group closed 2010 with sales of 426 million euros, or $562.3 million.

Sources estimate that, if listed, the group could be valued at about 1.1 billion euros, or $1.5 billion at current exchange rate.

The Carlyle Group, which owns 48 percent of Moncler, is considering the IPO for the group as a whole. “Each [brand] has a different customer, business model, identity and management,” said Marco De Benedetti, managing director of Carlyle, describing the other firms in the group as “more sportswear and functional and less luxury.”

Remo Ruffini, the firm’s president and creative director, credits his intuitive choices as driving the Moncler brand’s evolution from a collection of utilitarian, down-filled apparel with mostly local distribution into a fashionable, international label. From early projects with designers such as Nicolas Ghesquière and Junya Watanabe to ad campaigns shot by Bruce Weber, Ruffini is hard pressed to explain his decisions, except to say that he’s always followed his “instincts.”

But it’s also apparent there is a clear-cut strategy behind the company’s expansion. Ruffini, who acquired Moncler in 2003, immediately focused on “returning to the brand’s roots, adding a contemporary and technological edge.” Also, international growth has always been a priority through “a directly and tightly controlled and exclusive distribution.”

In order to create a cohesive statement, Ruffini stripped down Moncler to its essence: the down jacket. “I didn’t want to overburden the consumer with too many features, it had to be a clear and simple message,” he recalled. In addition, the entrepreneur was quick to understand that financial muscle would help further sustain the expansion and so sold a 48 percent stake in the company to private equity fund Carlyle in 2008.

“This was essentially an Italian brand, but, from Day One, I was convinced that it had the potential to become global,” said De Benedetti. “Remo was on the right track, and I thought Carlyle could concretely help accelerate Moncler’s internationalization.”

Both Ruffini and De Benedetti support a public offering. “We are preparing for the IPO, it’s an opportunity for the company to be more international and have more visibility,” said Ruffini.

“Yes, our objective is an IPO, it’s one of the things that we shared since the beginning as part of the foundations for a global brand,” concurred De Benedetti. He stressed, though, that there is “no need for new capital” and that the IPO will simply help the company take “a long-term perspective. As a fund, this is a term investment per definition.”

While Prada Group has chosen Hong Kong for its IPO, De Benedetti said Moncler is a “European company. I think it will maintain its roots, and list where these roots and values are.” In any case, De Benedetti and Ruffini are adamant that Moncler will remain a luxury brand.

“We have no plans to over-distribute the label, we want to count 100 stores at the most,” said De Benedetti. The brand currently has 46 stores.

Moncler was initially a wholesale business, but Carlyle has accelerated expansion of the brand’s retail division in the past two years. The latter accounts today for 30 percent of sales and De Benedetti said he expected it to represent half of revenues in three years. Last fall, stores opened in Seoul; Lugano, Switzerland, and Munich, followed by units in Shanghai and Chicago in November and Beijing in December. Another venue in Beijing will open this year. Over the next three years, the company plans to open 10 stores in China.

In Japan, which is an historical market for Moncler, the company sharpened its wholesale network, but Ruffini also said it was a “priority” to open a Tokyo flagship this year. In February 2010, Moncler teamed up with Comme des Garçons on a selection of special products and a retail concept, a project dubbed Moncler 365. There are 10 shops-in-shops in Japan.

The company’s high-fashion collaborations include Moncler Gamme Rouge for women, designed by Giambattista Valli, and Moncler Gamme Bleu for men by Thom Browne. In February 2010, the company introduced its technical ski range Moncler Grenoble, named after the French town where the company was founded in 1952. The fall collection was shown last week at Grand Central Terminal during New York Fashion Week.

Carlyle III, which is the pan-European fund that made the investment in Moncler, sits on a cash pile of 5.5 billion euros, or $7.2 billion, and has invested half of this sum, said De Benedetti. The fund continues to look at the fashion sector for further investments, although De Benedetti conceded this is “not a sector for all.”