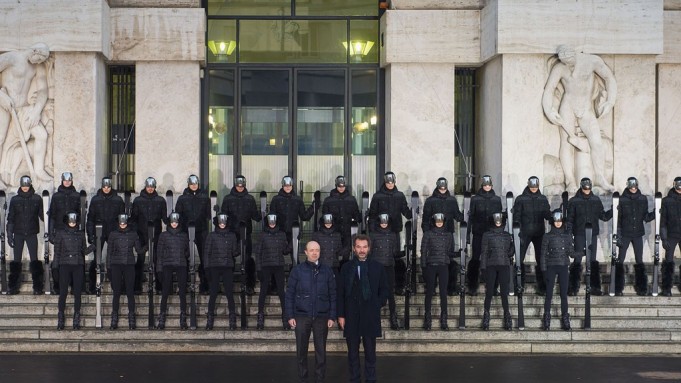 MILAN — Moncler’s first day of trading on the Milan Stock Exchange on Monday wasn’t just another routine day at the market.

Fifty models wearing all-black winter looks posed with chairman and chief executive officer Remo Ruffini on the steps of the Milan Bourse shortly after dawn; suspense built as trading was slightly delayed because prices were rising too much and too quickly; countdown to trading evoked that of a moon mission launch through sound and images, and Ruffini was greeted by the audience with a standing ovation as shares shot up almost 44 percent to 14.67 euros, or $20.15 at current exchange, after a few minutes of trading, at 9:13 a.m. “Emotions are the new currency. Together we must help [the brand] travel on the wings of emotion. And it is with the strength of millions of feathers that I thank you,” said Ruffini as a shower of tiny shreds of white paper — similar to feathers — dusted more than 450 guests, including Matteo Marzotto, Lapo Elkann and Franca Sozzani.

And yet Ruffini insisted in the morning that his plan was to ignore these figures. “I will continue to do my job. The listing will allow for transparency, to secure human resources and to be an asset for talented people,” said the executive, who was instrumental in the relaunch of the French brand, founded in 1952, and who remains Moncler’s main shareholder after the IPO with a 32 percent stake. “I’ve always only worked on quality rather than numbers, keeping our solid roots, never betraying the brand, nor the final consumer. The difference now is that I will talk with hundreds of people, and not only three shareholders.” Moncler’s selling partners are ECIP M., controlled by Eurazeo SA; CEP III, controlled by The Carlyle Group, and Brand Partners 2, controlled by Progressio Investimenti.

The public listing is sending a positive signal as Italy strives to emerge from an economic maelstrom, according to Ruffini. “This can be done also in a moment of economic sadness, it’s a sign of hope,” he said.

Ruffini was pleased with the “mix of investors” drawn by the listing as he noted that they were equally divided in the U.S., Asia and Europe.

There are also “great fashion names,” he said, without elaborating.

A source with knowledge of the situation cited investors from Salvatore Ferragamo, Ermenegildo Zegna and Loro Piana, in addition to Bernard Arnault and Renzo Rosso and “all the main sovereign funds, from Qatar to Singapore and Abu Dhabi.”

Raffaele Jerusalmi, ceo of the Italian Bourse, said Moncler was unique as it counted more than 750 different investors. “There is no public company that counts such a high number of different investors, and this is not because it’s part of a special sector or niche, but because of Ruffini’s skills in developing a company that grows at an incredible pace,” he said. “He is an example of Italian entrepreneurial talent. The Bourse is a starting point, not an arrival one, and it’s not by chance that Ruffini has remained a shareholder.”

Jerusalmi said institutional investors had oversubscribed 31 times the number of shares offered. The company is floating 26.7 percent of its share capital, or 30.7 percent with the Greenshoe option.

Stefano Corneliani, director of luxury and consumer goods at Intermonte Corporate Finance, was not surprised by Moncler’s performance. “I was banking shares would be valued at least 13 euros, it’s a fair and reasonable value and it was to be expected. Moncler’s IPO is so successful because of its whole package: It’s a successful brand with a retail business model with fantastic margins; Ruffini is an exceptional entrepreneur with a spectacular track record that has tapped a group of absolute quality executives, and the company does not have leverage debt,” said Corneliani, noting that Moncler has an earnings before interest, taxes, depreciation and amortization margin above 30 percent. Also, he said Moncler is arguably the only company that “had the luxury” to choose its investors. “There has been an extreme selection of investors and when you have a quality investor base it’s a great start. This is an exceptional company that could eventually become an acquisition target from big luxury groups.”

Asked if the fact that Moncler mainly relies on a single product, the down jacket, could be an issue, Corneliani said that “any company stems from one single product, and rarely does it become strong in all categories. In any case, there is potential to expand.”

Moncler shelved an IPO in 2011, and Marco De Benedetti, head of The Carlyle Group, said the brand since then “has consolidated its presence” and has stronger prospects on the market. “In June 2011 I convinced Remo to postpone the IPO and I know it was an enormous disappointment, but we adhered to our motto: Run, but not too quickly. We were not ready yet, Remo was stimulated to restart with his team and more determined, and today he reaps the rewards,” said De Benedetti.

“Starting tomorrow, you should not look at the price of the shares, once a month is enough, and never think of analysts or the market when making a decision” was his advice to Ruffini. Also, De Benedetti denied that Moncler’s success was tied to the moment. “There have been other companies that have had to cancel their IPO recently,” he said, citing Italian logistics firm Savino Del Bene as an example.

Vincenzo Longo, market strategist at IG Group, said that Moncler’s market capitalization “at this price would total around 3.6 billion euros [$5 billion], similar to the value associated with Tod’s and not far from that of Ferragamo (4.7 billion euros).”

While “a clearer scenario on the shares’ prospects” will take shape in a few weeks, as “there may have also been some pure speculative trading” affecting Monday’s performance, Longo said growth potential is significant, especially if the company would succeed in expanding in areas such as Asia and North America and differentiate its product.