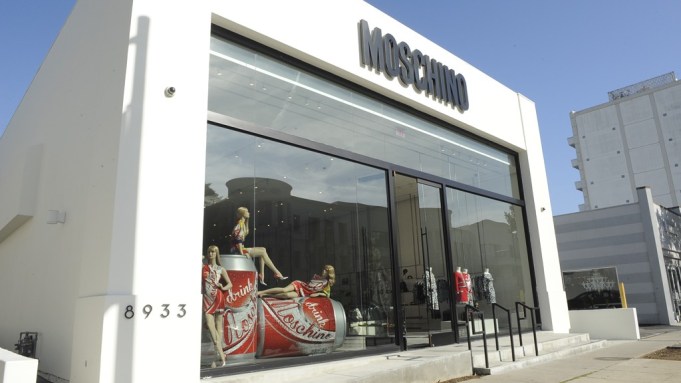 Moschino sits on a stretch of Beverly Boulevard west of fashion-heavy Robertson Boulevard, which is part of the West Hollywood Design District. Most tenants are furniture stores, showrooms and art galleries, though Stella McCartney is a few doors east and Jenni Kayne’s retail flagship and Hedi Slimane’s design studio are a few blocks west.

It’s an appropriate spot for Scott, a longtime figure in L.A.’s funkier art and design worlds. His appointment as creative director of Moschino in 2013 has reinvigorated the house, owned by Aeffe SpA, in part, believes chief executive officer Alessandro Varisco, because he brings the Los Angeles energy that is captivating the fashion world.

“I understand why Jeremy needs to spend time in L.A., where there is good energy. Frankly speaking, there is a little less energy in Milan right now.”

Varisco said Scott has driven the brand’s retooled strategy in the marketplace and it’s paying off.

“Five years ago when I joined Moschino, it was a good brand, but we have completely revised the strategy with Jeremy, who seemed to be only a dream for us five years ago. He has the same DNA of [house founder] Franco Moschino in that he is an excellent designer and communicator. But Mr. Moschino was a communicator for the Eighties and Jeremy is fantastic with new channels like the Web. Thanks to his following in social media, we are able to speak to a wider range of people and have totally changed their perspective of the brand. We have changed the customer profile to a younger, more trendy audience. I see the numbers boosting in accessories and ready-to-wear.”

All of Scott’s creations from the main line, including ready-to-wear (70 percent women’s, 30 percent men’s), accessories (handbags, shoes, scarves, headbands, cell phone and camera cases), swim, intimates and fragrance, are on display in the store. Scott placed the cola can print in front,the Spring Barbie capsule in the center, the pre-Spring black and gold and bandana print collections on the right and denim on the left. All are set off by movable chrome hanging bars, chrome and glass shelves and stone and concrete vitrines.

Another oversize cola can that opens up to display more clothes dominates the center of the store, in the back of which is a bare wall featuring the house’s double-C logo, a play on the old Cheap & Chic line. The bathroom is the only space without white walls; the walls and ceiling are covered in red, yellow and black graffiti by one of Scott’s friends.

In addition to a strategy of opening stores in “the right cities,” such as Berlin, Madrid, Miami, Tokyo and Seoul, the company also plans to revamp its 13 directly operated stores and 150 franchise shop-in-shop locations in places like Selfridges, Colette, 10 Corso Como and Opening Ceremony.

The next Scott-designed store is slated to open in a new location in Milan in May, followed closely by a boutique in New York’s SoHo.

Final touches on the store this week include two giant palm trees to flank the building with desert landscaping out front and furniture for the mirrored VIP room and 800-square-foot terrace in the back.