Having just been tapped by Woody Allen to work on his new Amazon TV series, set designer Carl Sprague discusses new work for the Moscow Ballet and Wes Anderson. 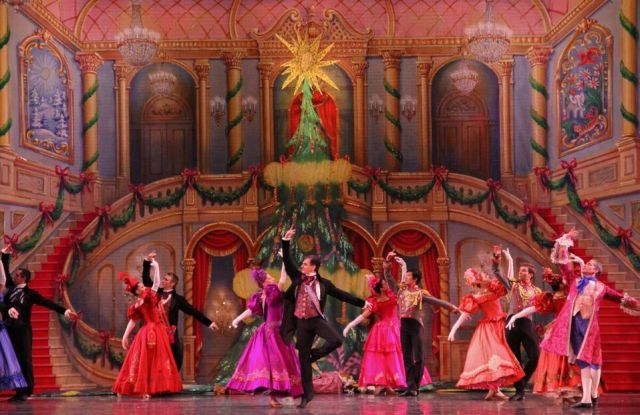 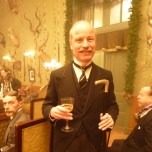 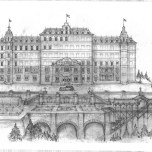 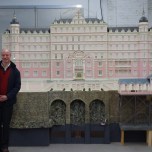 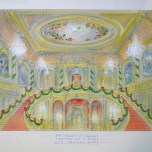 In the midst of what will be a three-year redesign for the Moscow Ballet, Sprague is working with a St. Petersburg scene shop to develop 30-by-50-foot backdrops, including the historically accurate one used for Mayor Stahlbaum’s Grand Ballroom scene in Act I that portrays traditional Russian lacquer art. Reviewing “a surprising number of photographs of the Imperial Ballet’s original 1892 production” and images of “grand, palatial 18th- and 19th-century architecture,” Sprague said he aimed “to stay true to this very Russian character of the Moscow Ballet’s ‘Nutcracker.’ They are more grounded in the sort of fairy-tale world which is especially appropriate for this piece.”

More grounded in the fairy-tale aspect of the Christmas Eve adventure than some American interpretations, the Moscow Ballet’s “Nutcracker” gives Sprague the indulgence of painting classic 19th-century scenery. While he is the first to admit “there’s not much call for that in the movies,” Sprague said he did sneak in a snowy “Nutcracker backdrop” through his involvement in an unrelated project, David O. Russell’s new movie “Joy.”

With a film portfolio that includes concept work for Wes Anderson’s “Grand Budapest Hotel” and art direction for “The Royal Tenenbaums” as well as “Twelve Years a Slave,” “The Social Network” and “The Age of Innocence,” Sprague was recently recruited by Woody Allen to work on his new TV series for Amazon.com, which debuts next year. Sprague is also teaming with Anderson again for an animated film the director is shooting in London. “Very labor-intensive” and “in the same type of world as ‘Fantastic Mr. Fox,'” the new movie will probably require a couple of years before anyone sees it, Sprague said. The set designer is also working on his own film adaptation of the 1917 Edith Wharton book “Summer.”

“I didn’t get lucky enough to go to Russia. But they’ve done an excellent job of executing these huge backdrops. They might have bigger drops at The Met, but not by much,” said Sprague of the “Nutcracker.” His own memories of the ballet were rooted in the New York City Ballet’s “phenomenal” Balanchine version from his youth. More recently, when ferrying his son Ruslan to rehearsals of the Albany Berskhire Ballet’s production, Sprague offered his artistic services to redesign the backdrops, which were in tatters, he said. “But the Moscow Ballet is a whole other order of business. They have not one but two touring companies. If you check out that schedule on their Web site, it’s like the old days of vaudeville, zooming from every big theater in the country to the next doing one-night [performances],” he said.

Praising the existing sets by children’s book illustrator Olga Larionova (of  St. Petersburg’s Russian Academy of Art’s Repin Institute of Art), Sprague said they need replacing purely because they are 15 years old. “The difference between my approach and what they have now is I’m trying to add a sense of architectural depth. The story is such a journey really about moving through space. The little girl ‘Nasha’ goes on this incredible voyage through time and space so I’ve been doing what I can to put a little perspective into this whole picture.”

As for Anderson’s renewed influence on fashion, Sprague said, “His influence in fashion is incredibly powerful. He’s made such a difference. There were things he was making the tailor do with suits for ‘The Royal Tenenbaums’ that at the time seemed extraordinarily eccentric. Now you can’t walk down the street without seeing that’s what everyone is wearing. He has a very specific sensibility there and is very various.”

While working on “The Grand Budapest Hotel,” Sprague was asked by Anderson to appear as an extra, “a distant relation,” in the will-reading scene. “So I had the delight of going to get suited up by Milena Canonero, the costume designer, who has more Oscars than she can dust…She had this incredible army of cutters, sewers, stitchers, fitters and hat people just doing the most extraordinary work,” Sprague said. “That movie was so intensive with extras there would be a minimum of 50 a day and sometimes 200. What I didn’t realize until I was in one of the scenes was that Milena was there at 5 a.m., when they all came in to get dressed. She would do everything, looking you up and down — and this was for background people. Wes uses everything that you barely see. It was very impressive. And she was there until 10 o’clock at a night. She is a pretty amazing woman.”

The fancy suit with wing collars and little gray mustache that Canonero decided on for Sprague’s role made him look so much like his Slovenian banker great-grandfather that he shared a portrait of him with Canonero. “She looked at the picture very carefully and said, ‘Ah, no, we must put you in a cutaway,'” Sprague said. “She sent me back to wardrobe and the assistants sort of sighed, and found me something even more grand – striped pants and a morning coat.”

Given Anderson’s influence on some recent runways, it’s not surprising that Sprague gets offered his share of fashion-related projects. In June, he orchestrated the launch party for Marc Jacobs’ Decadence fragrance in the an Lower East Side vaudeville theater. “We did magic shows, tricks with Marc’s dogs and filled the place up with lights, mirrors and cushions and stuff. It was a lot of fun,” Sprague said.

The set designer has envisioned a Miu Miu party for 800 in Shanghai a few years ago. “Because of Wes more than anything else, I occasionally get these funny, out-of-the-blue calls from people who are looking to somehow tap into his sensibility,” he said. “I was just talking to some sort of fancy French agent, who was somehow excited about me because I’ve done four projects with Wes. In any case, Wes is the designer in all of these things.”

As for his own handwork, Sprague said, “One of the things I find as I continue working in this business is that so many people, who call themselves designers don’t actually design. They don’t draw. I never thought of myself as being such a crackerjack drawer but the fact of the matter is that I keep on doing it. And the power of a good sketch or an informative rendering is so great.

“In this day and age, people spend so more of their time clipping out reference pictures that they Google. If you can draw a picture of what you want to have happen, it’s amazing what will happen,” he said. “You know, people take a look at it and suddenly the budget somehow lines up and you can make it work, because there’s some point of reference. And you’re not just all trying to make it up at the last minute.”