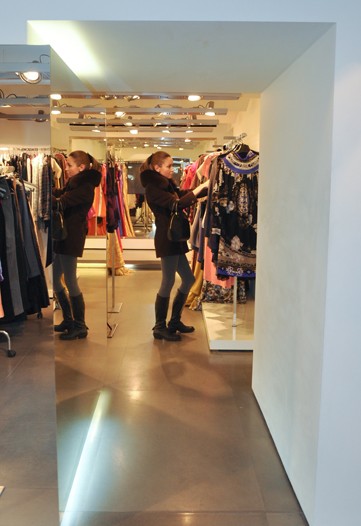 MOSCOW — The news from Russia hasn’t gotten any better.

Until last year a key potential growth engine for luxury brands, the market has imploded as rapidly as the price of the oil that fueled the country’s wealth. In Moscow, an Alexander McQueen and a Stella McCartney boutique, both of which are franchises run by the same Russian firm, are to close less than 18 months after opening as a result of the crisis, while department stores report plummeting sales. And the prospects for Russian brands, many of which previously had international expansion in their plans, are less certain.

The McCartney and McQueen stores “were both opened practically at the beginning of the financial crisis,” said Lidia Alexandrova, the manager of luxury stores for Russian franchisers Arts Group. “They need an extremely large investment to operate successfully. The owners decided that it makes more commercial sense to rent out the space for other uses.”

The McQueen store opened in September 2007, and the McCartney store in March 2008.

A Manolo Blahnik franchise also recently shut down, although a company spokesman declined to comment on the reason.

Russia’s stock markets and currency have taken a battering as a result of the financial crisis, which has exacerbated the effects of slumping oil and metals prices and a pullout of foreign investment. The government is facing hard realities: Its 2009 budget was based around an estimated oil price of $95 a barrel, though last week Prime Minister Vladimir Putin ordered that the budget assume an oil price of $41 a barrel. Oil prices on Wednesday averaged $42 to $44 a barrel on global exchanges.

The country is not officially in a recession, though GDP forecasts have been slashed. And the government has spent around $200 billion, a third of its reserves, to prevent the ruble from collapsing.

The effects have been felt unevenly across Russian society, though experts say the middle classes and the rich will be the hardest hit. Some of Russia’s wealthiest have seen their holdings plunge in value. By December, metals tycoon Oleg Deripaska had perhaps lost around $18 billion of his estimated $28 billion fortune, according to Forbes magazine.

While even up until November fashion industry figures here were largely upbeat about their prospects, that outlook has given way to a more pessimistic tone.

“This year’s goal is not to make any business — it’s to stay in business and survive,” said Aisel Trudel, who runs four multibrand boutiques and the franchises for Diane von Furstenberg, Christian Louboutin, Agent Provocateur and other brands.

Purchases in her boutiques had fallen 25 to 30 percent year-on-year in October, Trudel said, with jeans sales hit especially hard, and shoes and clothes by well-known designers doing better. For the first time in her career, she added, she started sales in her stores in November, mainly because her competitors were doing so.

Trudel gave an example of a customer who recently bought a $125,000 J.Mendel fur coat. It was a good sale, she said, but in previous seasons the client might have purchased three such items.

The downturn has retailers scaling back as quickly as they can. At the historic Tsum department store, buyers are cutting their orders for the upcoming seasons by 20 percent.

Meanwhile, the McCartney and McQueen stores, part of a three-unit complex on the cobblestoned Kuznetsky Most Street along with Lanvin, are due to close once the winter collections have sold out. Signs in the windows advertise a 50 percent-off sale.

Alexandrova of Arts Group declined to provide information on profits or foot traffic, though she said the closures were solely the result of a fall in spending linked to the economic crisis, rather than other factors, such as the brands being unpopular among Russians.

“The problem isn’t with the designers or their collections,” said Anna Lebsak-Kleimans, head of the Moscow-based market research firm Fashion Consulting Group. “It’s more to do with the low profitability of monobrand boutiques in the luxury segment. All these concepts involve a very high level of risk.”

A spokesman for McCartney declined to comment on the closure, and McQueen spokespeople did not respond to a request for comment.

The Lanvin store is successful and will remain open, Alexandrova said.

A spokesman for the Manolo Blahnik franchise, Joe Fountain, initially said the company’s store was still operating, though when told a reporter had called the store and found the premises had been rented out to a Russian firm, he confirmed the store was no longer open. He would not say whether the closure had anything to do with the credit crunch.

“We have terminated our agreement with the current franchisees, and we are currently in discussion with potential new franchisees who are interested in opening Manolo Blahnik boutiques in Russia,” Fountain said.

These closures follow that of a Vivienne Westwood franchise in the summer. The owner, an oligarch’s wife named Olga Rodionova, linked the store’s problems to economic conditions.

After becoming well-known at home, many Russian designers early last year cited international and domestic expansion as a key goal in the short term. But those plans today are generally being rethought or put off.

The most notable casualties of the crisis are 12 Kira Plastinina fast-fashion shops in the United States, which closed in December after opening less than a year earlier. The Moscow-based brand, which also has stores across Russia and in Ukraine and Kazakhstan, is funded by Sergei Plastinin, a milk and juice mogul, while the clothes are designed by his 16-year-old daughter, Kira. Plastinin has said the pullout from the U.S. was related to his losses in other business ventures during the recession. But the failure of the American stores also was likely caused by factors not linked to the credit crunch, such as a weak flow of merchandise compared to rivals like H&M.

For Russian luxury designers, many of whom are financed by secretive oligarchs and top businesspeople, the picture is ambiguous.

Alexander Terekhov, a young women’s wear designer who shows his Terexov collection in New York, has nixed a planned store opening there. The economic conditions, combined with Terekhov’s relative lack of brand recognition and other factors, are to blame, said Alison Kennedy, a spokeswoman for Terekhov.

Still, Terekhov plans to unveil a Los Angeles store in March, though it will be under a different brand.

“The movie industry is not losing millions of dollars. It’s not based on banking out here. People are still shopping. There are still a lot of movie wives that are cruising up and down Rodeo Drive,” said Kennedy, despite numerous reports Los Angeles retailers are facing even greater challenges than those elsewhere.

Designer Denis Simachev has postponed stores in Saint Petersburg and the Ukrainian cities of Kiev and Odessa, while Igor Chapurin is going ahead with a store in Moscow’s GUM mall on Red Square in March.

Despite the industry’s murky prospects in Russia, some industry players say they’re looking on the bright side — or are forcing themselves to.

“I’m very optimistic,” Trudel said of her firm, which employs 350 people and is unveiling an Oscar de la Renta store later this year. “I don’t know what the ruble will do, whether the government will support us, and I hope the price of oil goes up. But we still have lots of people who love to dress beautifully.”