12 of Fashion’s Most Influential Latinx Designers

In honor of Latinx Heritage Month, WWD here takes a look back at some of the most iconic designers from Latin America and Spain. 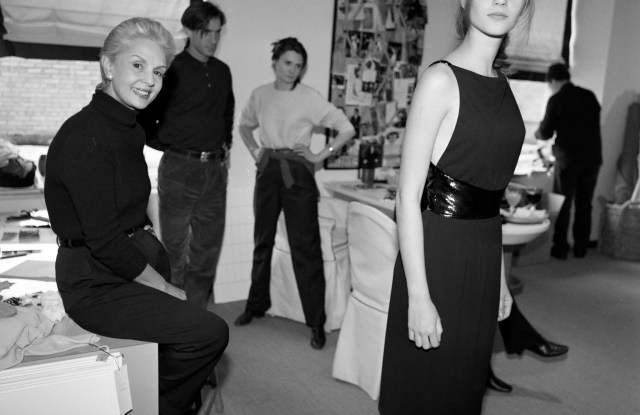 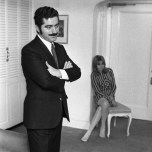 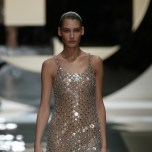 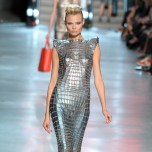 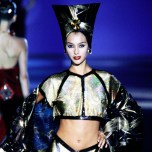 From outfitting first ladies to giving the stiletto heel new appeal and crafting innovative cuts and silhouettes, Latinx designers have had a major impact on fashion and continue to influence design today. In honor of Latinx Heritage Month, WWD here takes a look back at some of the most iconic designers from Latin America and Spain. 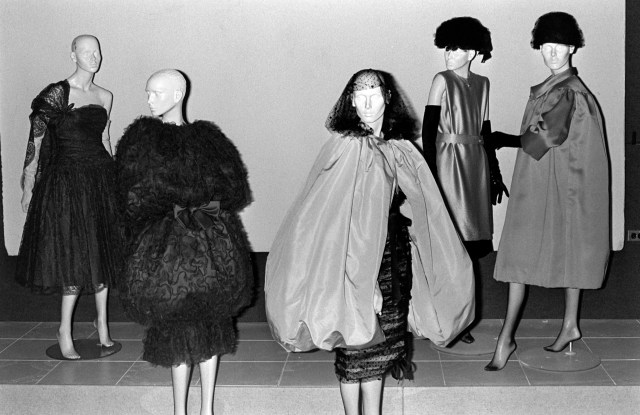 The Costume Institute of the Metropolitan Museum of Art’s first exhibition devoted to designer Cristóbal Balenciaga opened on March 23, 1973.  WWD

Cristóbal Balenciaga, born in 1895 in Getaria, a fishing village in northern Spain, was known for his mastery of cut, shape and form — many called him the only true couturier. Ranging from the “Infanta” styled gowns of the Thirties, which drew on his Spanish heritage, as did his flamenco-style evening gowns, to his structured but fluid shapes of the Fifties and Sixties — including the tunic, the babydoll dress, the sack dress, and a one-seam yoke sleeve cocoon coat — many of Balenciaga’s designs would forever change how women dress. In 1965, he ushered in the three-piece tailored longline suit for women. Though Balenciaga closed his house and retired in 1968 (the brand is now owned by Kering and designed by Demna Gvasalia), his legacy has lived on in the label that still draws a cult following today. 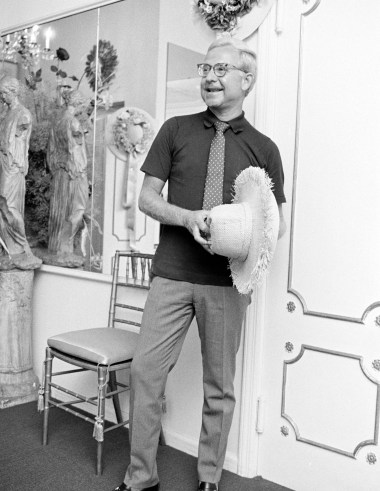 Adolfo poses at his New York City atelier with a hat design from his summer 1968 collection.  WWD

Though the name Adolfo may not be among fashion’s most familiar today, Cuban-born Adolfo Sardinia (who didn’t use his surname professionally) once apprenticed under Balenciaga in Paris and lent a lot to the industry. Adolfo began his career in America as a designer for New York milliner Emme, however, he had bigger dreams and began designing his more affordable and accessible version of the Chanel suit, alongside his sophisticated and timely couture and ready-to-wear looks for society women. His fame grew when Nancy Reagan, not yet the U.S. first lady, began wearing his Chanel-inspired suits, putting a stamp on his contribution to fashion. 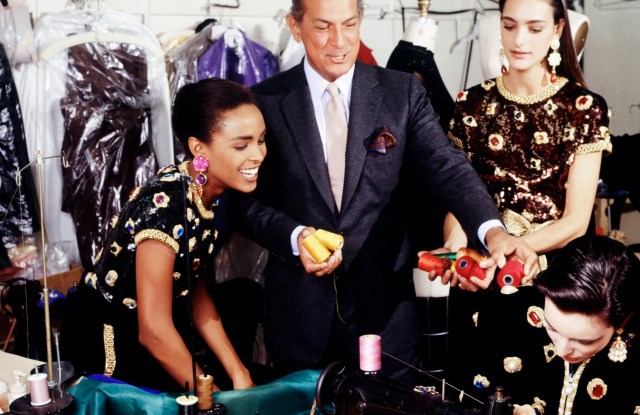 The fashion world’s ultimate gentleman, Oscar de la Renta was born in 1932 in Santo Domingo, Dominican Republic. He, too, was trained by Balenciaga and began his career at the House of Lanvin under the tutelage of Spanish couturier Antonio del Castillo, before coming to the United States. De la Renta first gained notice by designing a made-to-measure collection for Elizabeth Arden in the early Sixties. He launched his eponymous label in 1965, and his fame grew from there, helped in part by his 1973 participation in what WWD’s publisher John B. Fairchild dubbed “the Battle of Versailles” when American designers triumphed over the French in a fashion extravaganza at the iconic palace. During his career, the designer created women’s and men’s wear, several fragrance lines, a diffusion dress collection label Miss O, and served as couturier to the House of Balmain from 1992 to 2002, which made him the first Dominican to design for a French couture house. Fluid, rich gypsy looks, along with flamenco dresses, peasant scarves and love of ruffles in brightly colored silk gazar for day and evening, were among his signatures. Oscar de la Renta died in 2014 after a long battle with cancer. His brand is currently under the creative direction of Laura Kim and Fernando Garcia, who are also the creative directors of Monse. 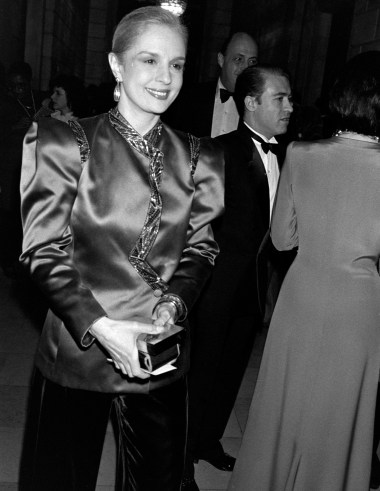 Venezuelan-born Carolina Herrera has always been known for her personal style. A regular of New York’s famed hotspot Studio 54, Herrera became known for her flair, earning herself a place on the International Best Dressed List in 1972. A decade later, in 1981, on the advice of legendary Vogue editor in chief Diana Vreeland, the Carolina Herrera collection was born. Herrera has made form-fitting yet feminine silhouettes, often in black and white, key elements of her aesthetic, and the refined glamour seen in her women’s and bridal collections remains timely today. The designer has dressed two of fashion’s most influential first ladies, Jacqueline Kennedy Onassis and Michele Obama, as well as countless celebrities. Herrera passed the reins of the label’s creative director to Wes Gordon in 2018, and the Puig-owned brand today produces fashion, accessories and fragrances, as well as the second line CH. 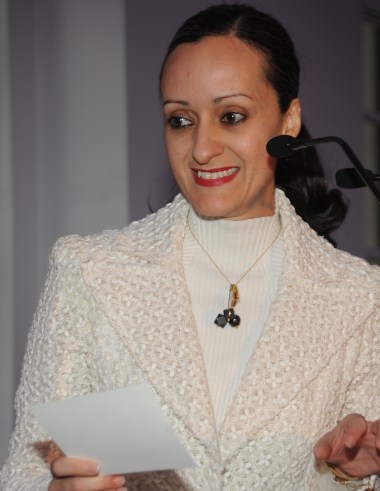 More than a designer, Cuban-born New Yorker Isabel Toledo and her husband and collaborator Ruben Toledo were known as artists, curators and advocates for aspiring creatives. Toledo’s design aesthetic went beyond making clothes — she worked constantly to perfect her craft, taking the entire process into consideration, from her selection of materials (which informed the cut and shape of her silhouettes) to never needing to conform to the mainstream trends. Toledo once led the Anne Klein label and created a collection for retailer Lane Bryant, but she is perhaps best known for dressing former first lady Michelle Obama for President Barack Obama’s 2009 inauguration. Isabel Toledo died in 2019 at age 59. 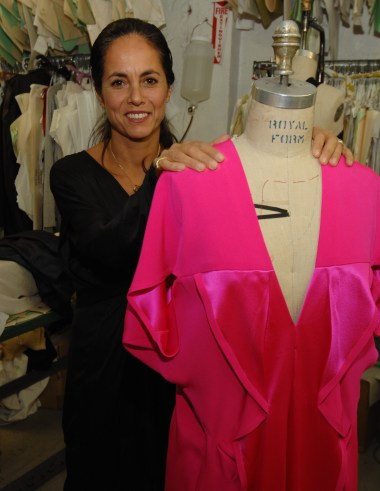 Chilean designer Maria Cornejo had her first success in the fashion industry in London in the mid-Eighties with mentor and English fashion designer John Richmond. Their collection, called Richmond Cornejo, was a hit with the decade’s club kids in Europe and Japan and their shows were among the highlights of the London fashion scene of that era. The duo split in 1987, and Cornejo would launch a signature collection. Cornejo moved to New York in the late Nineties, but her Chilean roots and experience in the London art scene continue to inform her outsider style in the cool, comfortable and contemporary looks she has become known for. Her newest endeavor, Zero + Maria Cornejo, is a growing luxury fashion line committed to innovative sustainable practices and local manufacturing. 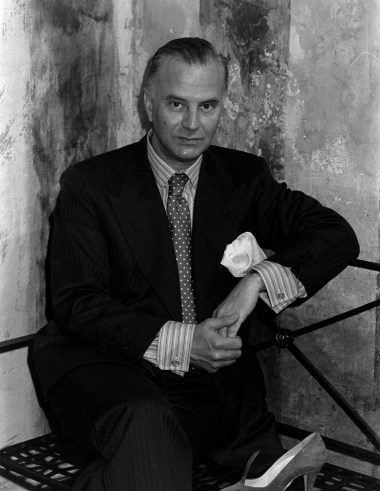 Manolo Blahnik with a new pump from his fall 1986 collection.  WWD

Once women all over the world got a taste of Manolo Blahnik’s famous four-inch heels worn by Sarah Jessica Parker on “Sex and the City,” the rest was history. Born in the Canary Islands, a Spanish archipelago off the coast of northwestern Africa, the always energetic and fast-talking Blahnik credits his career to a mere accident, when his famous friend Paloma Picasso introduced him to then-Met Costume Institute director and Vogue editor in chief Diana Vreeland. His reintroduction of the stiletto heel was a reaction to the bulky platforms and wedges of the Seventies, which he declared decidedly unfeminine. Blahnik’s first designs were seen on the London runways in a collection by famed London designer Ossie Clark. His stiletto pumps, which often resemble pieces of art with ornamentation and flair, the initial lasts of which he always hand-carves himself, are considered collector’s items. 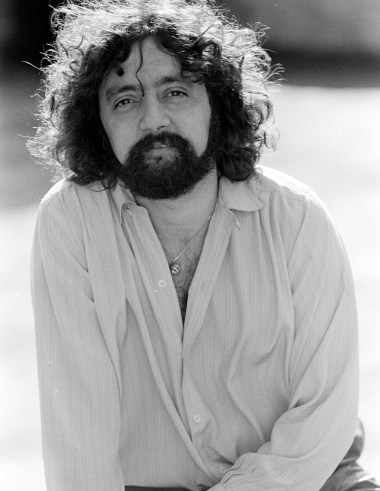 Carlos Falchi may not have entered fashion’s mainstream consciousness, but the luxury patchwork leather handbags that made the Brazilian-born designer a household name in the Seventies and Eighties are still prized collectibles. Getting his start with the rock ‘n’ roll crowd, Falchi’s bags were carried by Mick Jagger, Patti Smith and Tina Turner, to name a few. His first collections — which combined bold, colorful exotic skins, including python, alligator and ostrich — were one of a kind. After meeting Henri Bendel’s store director Geraldine Stutz, his accessories business began. In 1980, Falchi’s soft buffalo satchel was one of the most copied handbags in the industry. Falchi died in 2015 at age 71. 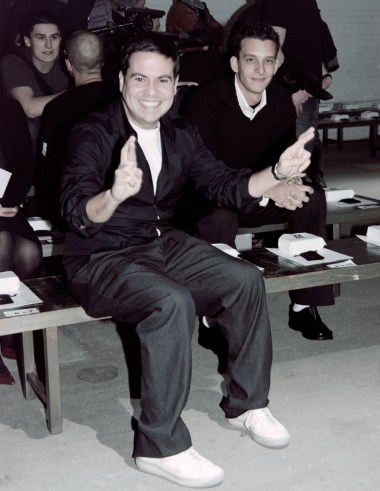 In 1996, when Carolyn Bessette walked down the aisle to marry John F. Kennedy, Jr., Cuban-American designer Narciso Rodriguez, who made her dress, was not a household name — though that moment would change his career. The photo of his friend Bessette-Kennedy in her bias-cut wedding dress, hand-in-hand with her new husband became iconic, and a year later Rodriguez launched his ready-to-wear label. With two decades of successful collections, he would again become a part of history when former first lady Michelle Obama chose a dress from his spring 2009 collection to wear on stage during President Barack Obama’s victory speech that year. Rodriguez’ collections continue to emphasize his minimalist approach and emphasis on bias cut, form-fitting designs. 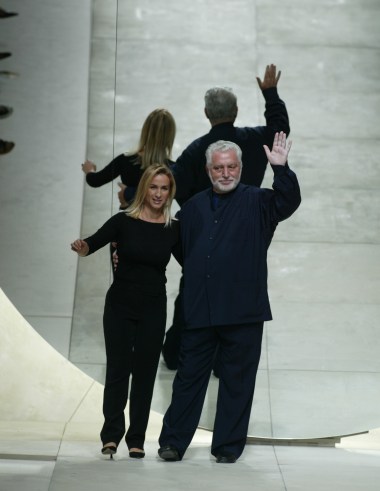 A model walks down the runway at the spring 2003 Paco Rabanne show in Paris.

The paillette would never be the same after Spanish designer Paco Rabanne entered the fashion scene in the Sixties. Rabanne’s use of shiny plastics and metal instead of fabric to create his first collection in 1966, “Manifesto: 12 unwearable dresses in contemporary materials,” was an innovation of the time. The dresses, worn only with nude- or flesh-colored stockings, were considered risqué because they gave the illusion of nudity. Their uniqueness helped the trained architect turned jewelry designer become one of haute couture’s household names. Rabanne’s looks would eventually expand into the ready-to-wear market, as well as a successful fragrance brand. His style is widely visible on stars, including Jane Fonda in the 1968 film “Barbarella” — her famous green bodysuit is his design. Rabanne’s minidress in paillettes and metal mixed with diamonds is among his most notable design contributions. Rabanne, 86, still makes the Paris scene, but his fashion house is now owned by Puig and the collections are designed by Julien Dossena. 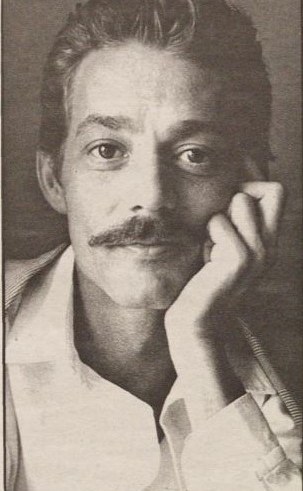 Jesus Del Pozo, born in Madrid in 1946, helped push the globalization of the Madrid design scene in the early Nineties. A trained interior and furniture designer, Del Pozo launched the fashion brand that would ultimately become Delpozo in 1974. The designer’s strong sense of style influenced the cuts, shapes and vibrancy of his collections, the first of which were sold at Bloomingdale’s in New York and Fred Segal in California. Expanding his creations, Del Pozo branched out into lingerie, bridal, accessories and fragrance. In 1992, the designer launched his “Duende” perfume, followed by “Quasar” in 1994. The designer died in 2011, and Josep Font took the helm as creative director. Font’s departure in 2018, however, has left things uncertain for the brand, which has been very quiet in 2020. 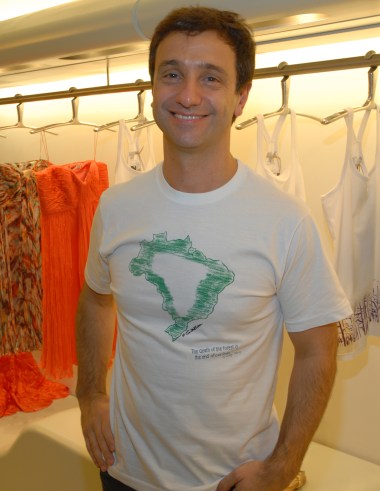 Carlos Miele cohosts a party in 2008 with Vogue at his Carlos Miele store in New York City. The event celebrated a collection of custom T-shirts whose sale benefits the Rainforest Foundation-U.S.  Kristen Somody Whalen

Brazilian designer Carlos Miele, burst onto the global fashion scene in 2002. By then, the self-trained designer was already a household name in his native country. In 1994, Miele introduced one of the first sustainable denim jeans made out of plastic bottles and kept much of the production of his signature sexy styles — a fusion of technology, luxury fabrics and regional artisanal craftsmanship — in Brazil. By the mid-Aughts, the designer’s look would be a go-to for pop stars like Britney Spears, Jennifer Lopez, Rihanna, and actress Eva Longoria, who wore one of his designs on stage during the American Latino Media Arts Awards in 2012.

This is the first in a WWD series over the next few weeks marking Latinx Heritage Month with a look at some of the most influential players from Latin America and Spain, as well as the impact those cultures have had on fashion, beauty and retail.