The “MSGM 10! The (In)complete Brand Anthology” volume highlights the company's milestones through images and offers a behind-the-scene look at Massimo Giorgetti's personal world.

Sometimes the best things in life come when you are not looking for them. When in 2019 Massimo Giorgetti was gearing up to fete the 10th anniversary of his MSGM brand, he wasn’t planning any celebratory book.

However, as he explained during a Zoom meeting, one day he got a call from Rizzoli New York, which offered to publish a 10th anniversary book. “Of course, we were really pleased to receive that offer and we suddenly had the feeling we had achieved something big, that we had hit a milestone and that it was probably time to reflect on what had been done over the past decade,” Giorgetti said.

The pandemic actually slowed down the release of the project and “MSGM 10! The (In)complete Brand Anthology” volume, which was supposed to be unveiled in April, is available at MSGM shops in Milan and London, as well as at the brand’s online store. From January, the book, retailing for 75 euros, will also be on sale at Rizzoli’s bookstore in Milan and New York and then in a selections of bookshops worldwide.

The tome’s cover stands out in a very MSGM neon yellow color framing a picture of Riccione by artist Massimo Vitali. The book doesn’t follow a traditional structure, but is designed “to be like a magazine of the brand where we reflect on the adventure we lived in the past 10 years,” said Giorgetti, who during the lockdown, in collaboration with Rizzoli editors, reedited the first version of the volume. “I took advantage of the two months we spent home to revisit it, to make it even more colorful, positive,” added the designer, explaining that instead of a classic narration he wanted the book to have a stronger and more immediate visual component. 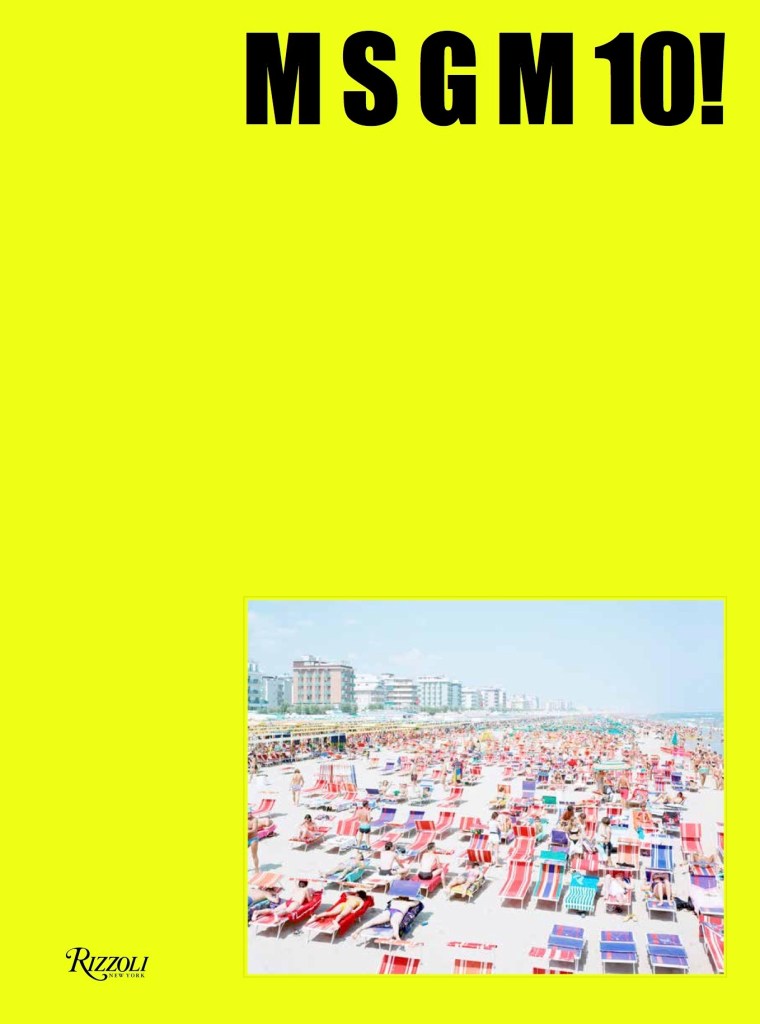 The cover of the “MSGM 10!” book published by Rizzoli New York.  Courtesy of MSGM

The book kicks off with a letter that Giorgetti wrote during the lockdown in April, followed by small texts by stylist Katie Grand; Vogue Talents and Vogue Italia deputy editor Sara Maino, and Valerio Innella, the founder of Beside Communications, the Milan-based agency that handles public relations for the brand, as well as as a question-and-answer session where Giorgetti is interviewed by Charlie Porter. Central to the book are a wide range of images from MSGM’s runways shows and advertising campaigns, juxtaposed here and there with quotes from art critics and editors.

A very personal component is introduced via images of Giorgetti and his family, as well as by childhood pictures of MSGM collaborators.

“It’s Rizzoli that actually pushed to me to focus more on the personal side. They encouraged me to share more and more about me, my family, my house, the people around me,” Giorgetti revealed. “I think that this is how Rizzoli wants to approach a book in 2020, especially when it comes to a brand like MSGM. They really didn’t push for that glossy perfection and sophistication most of their books are known for.”

The tome, which comes with stickers with some of the best-known MSGM prints, closes with a timeline and images that punctuate the brand’s development, from the company’s foundation with the Paoloni fashion manufacturing group in 2009 to the release of the spring 2020 campaign shot in Rimini by British photographer Johnny Dufort.

“With the last page of the book we closed a chapter and another one opens,” said Giorgetti, explaining that if in its first 10 years of life, MSGM has always been about lightness and intuition, now he inaugurates a new phase, focused on awareness. “We are reducing collections and we are developing our Fantastic Green sustainable project, which is highly complicated and requires a collective effort inside the company. However, I think that becoming more conscious of the environmental issue is key and we want to play our part.”