MSGM Shows Its Playful Side

Massimo Giorgetti is gearing up to affirm the brand’s joyful fashion philosophy at the Pitti Uomo men’s international trade show. 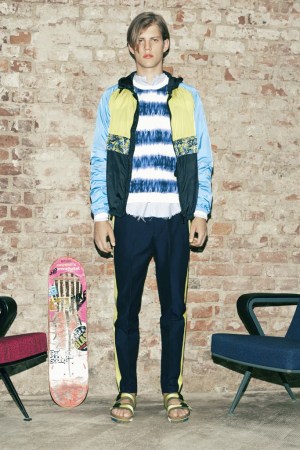 MILAN — Refuting the argument that men’s wear must be boring to be elegant, MSGM creative director Massimo Giorgetti is gearing up to affirm the brand’s joyful fashion philosophy at the Pitti Uomo men’s international trade show. The designer will unveil his spring 2014 collection with a dynamic presentation at Florence’s Stazione Leopolda on June 19.

“The challenge is to demonstrate that it’s possible to design men’s wear that can be colorful and fun, yet very sophisticated and chic,” said Giorgetti.

“The mood is inspired by the Nineties,” he added, citing Brandon Walsh of “Beverly Hills 90210” as an important reference for the collection. The good boy who moved from Minnesota to glamorous Beverly Hills with his difficult twin sister Brenda would have certainly loved the denim pants with MSGM’s iconic collegiate “M” logo embroidered on the back pocket, which Giorgetti included in the spring range.

However, opting for a look “which is less young and much cooler than in the past seasons,” Giorgetti didn’t indulge in the sweet and preppy, but channeled a slightly rebellious and grunge-very urban “American skate park” theme. Giorgetti also cited Larry Clark’s “Ken Park” and Gus Van Sant’s “Paranoid Park” as important iconographic inspirations for his collection.

In line with the main theme, the pieces show relaxed silhouettes — outerwear came in deconstructed shapes and the pants were never too tight. A look included a suede biker jacket, worn over a Kurt Cobain-like checkered shirt and a signature floral cotton sweatshirt matched with cotton gabardine maxi shorts.

A very athletic outfit, reminiscent of the California surfer style, included a multicolor windbreaker with micro-floral details paired with trousers with a contrasting lateral band. To complete the look, there were also a raw-cut lightweight shirt and a tie-dyed cotton sweatshirt.

Footwear included a revisited Nineties surf sandal, along with canvas sneakers and slippers with vivid prints. To highlight the strong Nineties inspiration, Giorgetti also designed skater shoes that are “a bit chunky.”

According to Giorgetti, the men’s business currently represents 20 percent of MSGM’s total revenues. “Our goal is to increase it to 30 percent by the end of 2013,” he said.

While MSGM rings in 70 percent of its women’s sales abroad, the men’s line is strongly tied to the domestic market, but, “I think that the U.S. might be ready to understand the men’s line and Japan is already growing thanks to the partnership with a local distributor, as well as Hong Kong and Korea,” Giorgetti said.

The MSGM men’s wear line is available in 100 stores worldwide, including Excelsior in Milan, Society Club in Monte Carlo, Monaco, Mahani in Dubai, Seoul’s Koon and Tom Greyhound, H. Lorenzo in Los Angeles, along with Behaviour and Owen New York.