The French fashion house is pivoting to become more consumer-facing.

Ever the disruptor, Mugler is shifting to a see-now-buy-now — and wear-now — business model, WWD has learned.

Earlier this year, the Paris-based fashion house began quietly taking orders under embargo ahead of its fashion show to prepare for a shift that should reach full throttle during Paris Fashion Week next February, when the complete spring 2021 collection will be shown, and be available for purchase at retail the next month.

In September, Mugler plans to present the first part of its spring collection — resort, if you will — and sell it in October, including on its new e-commerce site.

“We don’t want to deceive the customer again by presenting a product that’s not for sale,” Pascal Conte-Jodra, managing director of Mugler, said in an exclusive interview on Wednesday. He alluded to the blur of collections, shown too far in advance and often delivered with no relation to weather conditions, that has been the scourge of the fashion industry in recent years. “It’s not that we are cutting the size and volume of collections — we are just promoting and selling them differently.” 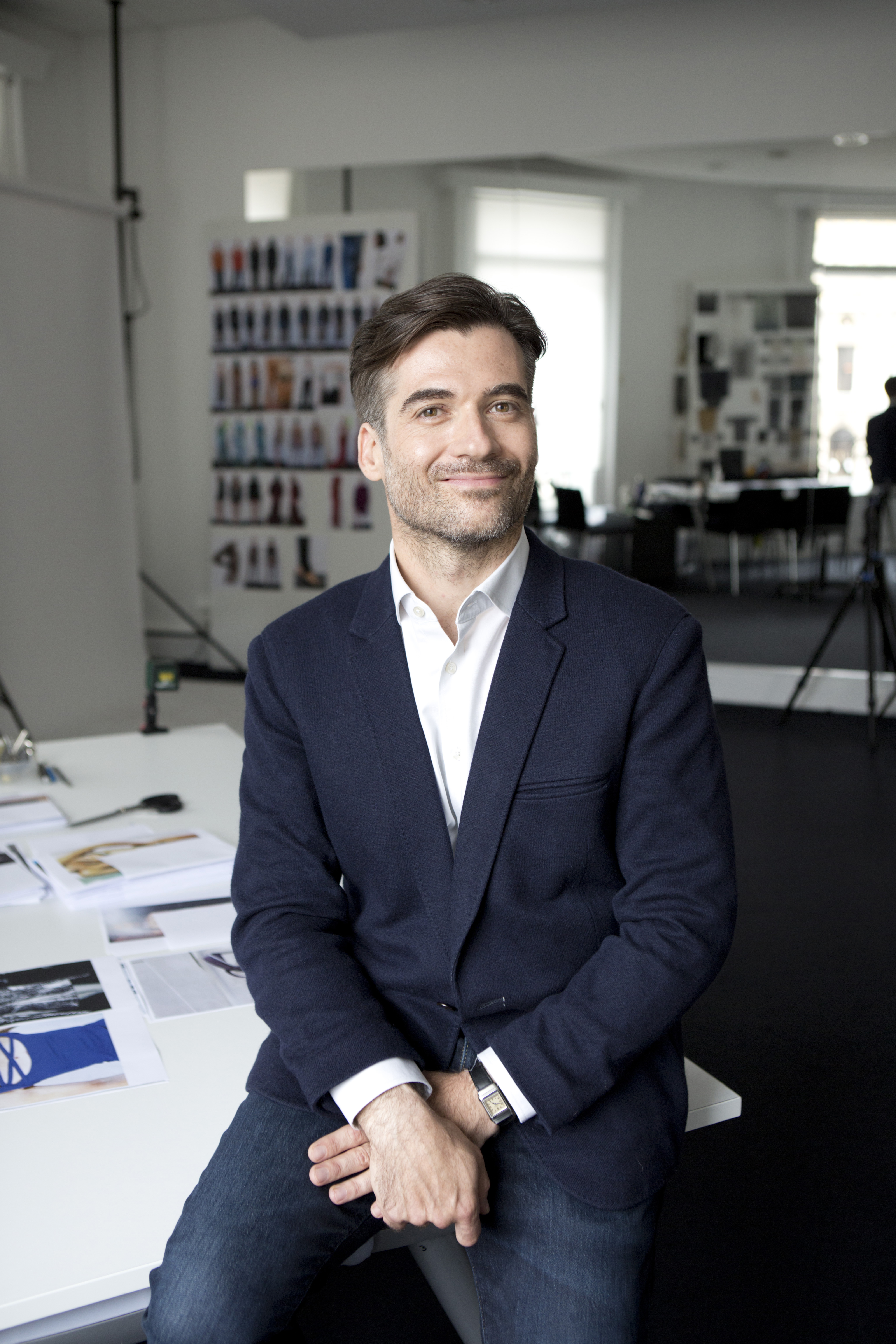 The executive calls its approach “see-now-buy-now, wear-now” to distinguish from some previous attempts at see-now-buy-now that sold or took advance orders on clothes for future fashion seasons.

He said its key wholesale partners, headlined by e-commerce pure players Net-a-porter, Sense, Mytheresa and LuisaViaRoma, have applauded the approach.

Since joining Mugler in 2018, Conte-Jodra has partnered with Mugler creative director Casey Cadwallader to retool its product cycles, now hinged on two collections a year and with the goal of exalting the brand’s commitment to female empowerment, and its brand DNA, via fierce, trans-seasonal fashions. 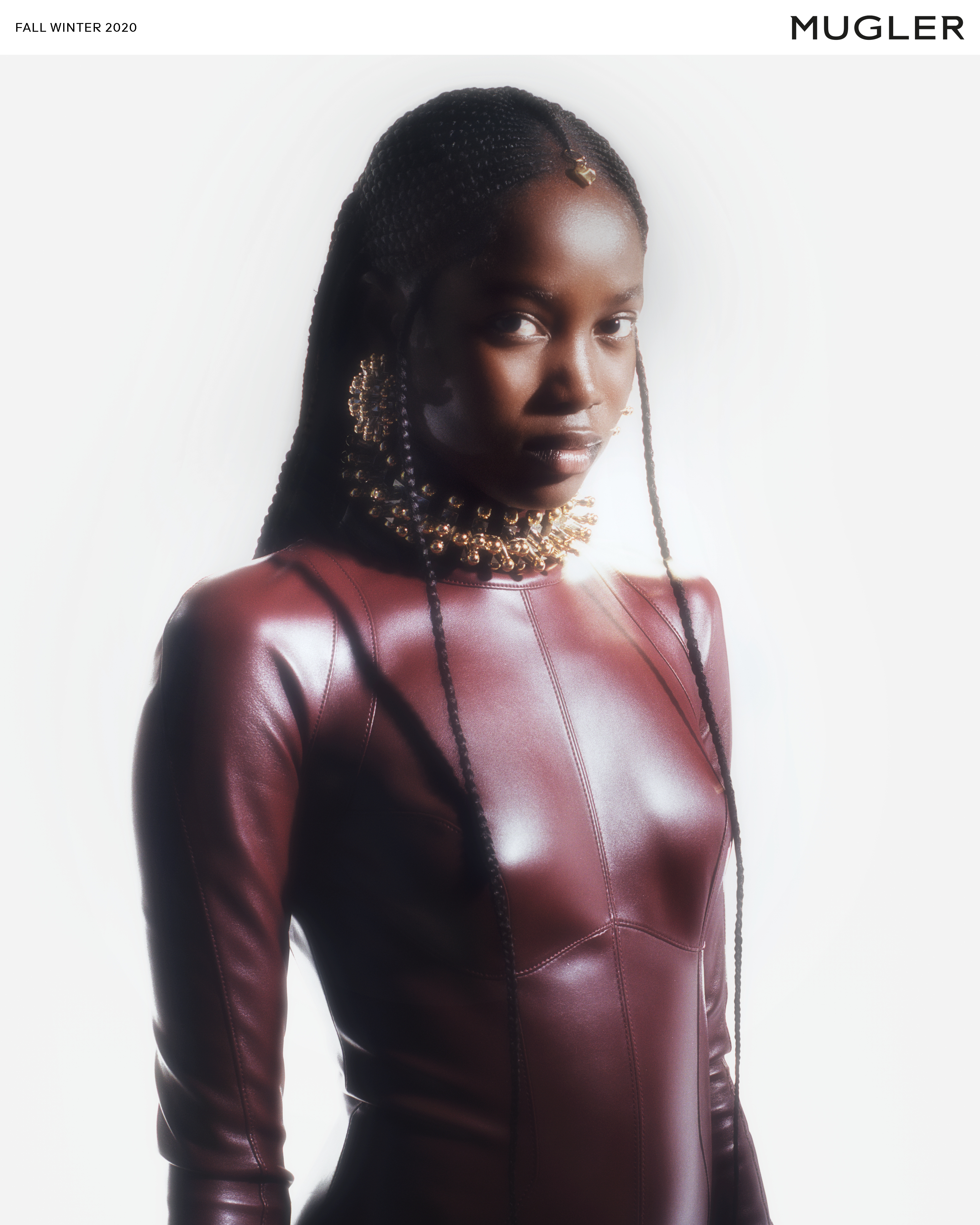 An upbeat, energetic executive who previously held leadership roles in New York at Hermès, Carolina Herrera and Marc Jacobs, Conte-Jodra straddled a change of ownership at Mugler. Last March, L’Oréal finalized the acquisition of the Mugler fragrance and fashion businesses, and the Azzaro fragrance brand and accessories.

While he declined to discuss any figures, WWD has reported that Mugler and Azzaro fragrances generated sales of about 340 million euros in 2018.

To be sure, Mugler’s potent and sculptural fashions — and such famous fans as Cardi B, Dua Lupa and Beyoncé — are driving the brand image. Meanwhile, its legacy of diversity and inclusivity — founder Thierry Mugler famously embraced models of all shapes, colors and sexual preferences when he launched his brand in 1974 — are proving timely and topical again. 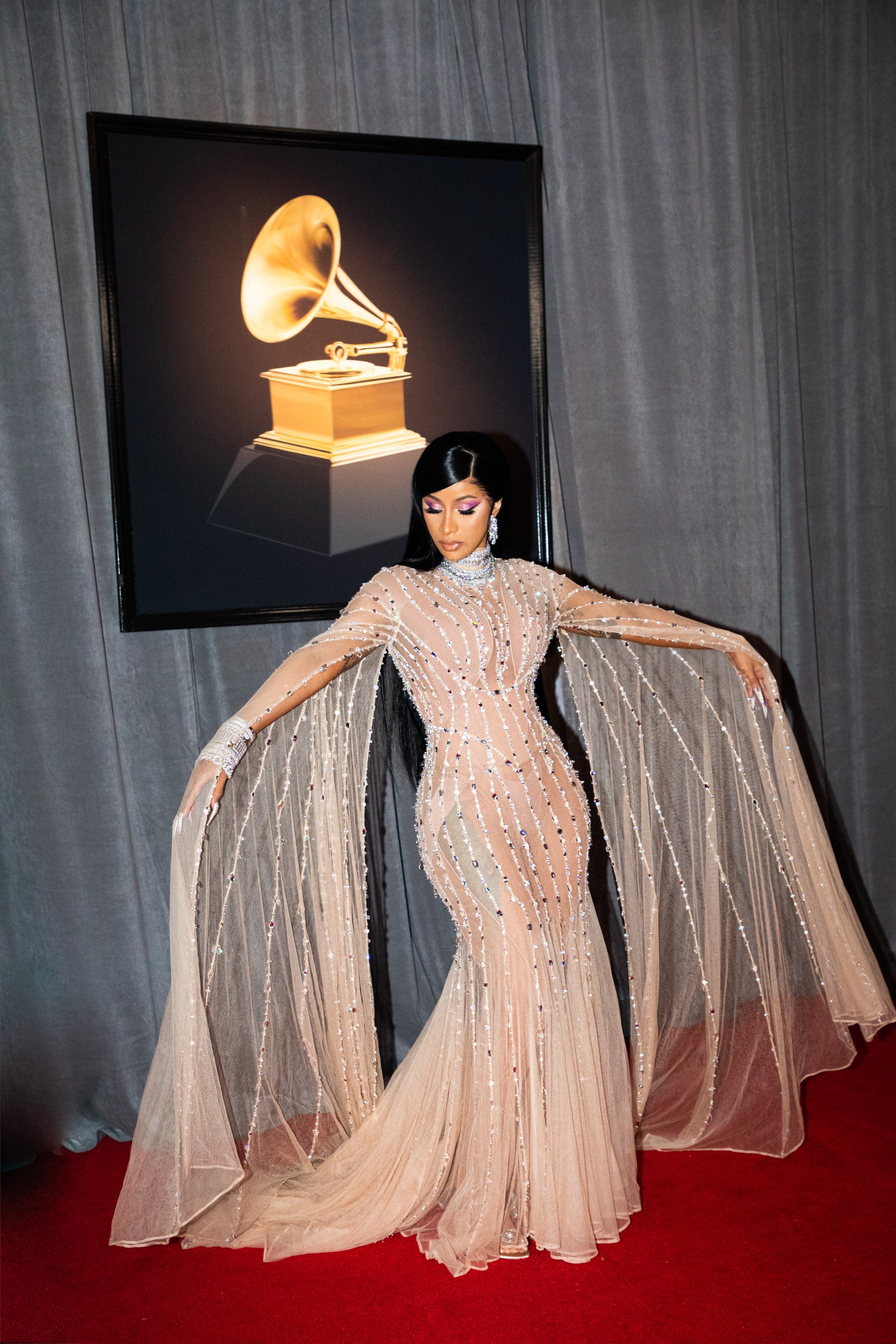 Cardi B wearing a Mugler custom creation at the 2020 Grammys Awards.  Courtesy of Mugler

“It’s not just a marketing tool, it’s what we fight for and aim for, in terms of social engagement as well,” Conte-Jodra said. “Under Casey’s vision, he took that legacy and brought it to another level and you can see it within our teams, our casting. It’s core with us.”

He stressed that Mugler’s decision to move to see-now-buy-now predated the coronavirus pandemic, and industry petitions to stem overproduction and correct deliveries that are out-of-sync with wearing occasions, precipitating early markdowns.

The shift in seasonality is also meant to give Cadwallader more time to develop and perfect his intricate, body-sculpting cuts, and to better accentuate iconic “long-lasting’ products, such as its boldly tailored jackets, or spiral-seamed jeans.

“We are not working for planned obsolescence; we want to create those pillars,” Conte-Jodra said. “You can trust Casey to be very sharp, avant-garde and inclusive as always.”

Deliveries are meant to have a long shelf life, while Mugler will also use drops to animate the season and promote key product ranges like its technical sportswear separates. Some drops will be exclusive ranges for particular clients.

Conte-Jodra said all changes are meant to make Mugler a more consumer-facing brand, and one with sharp, consistent messaging to break through the clutter. 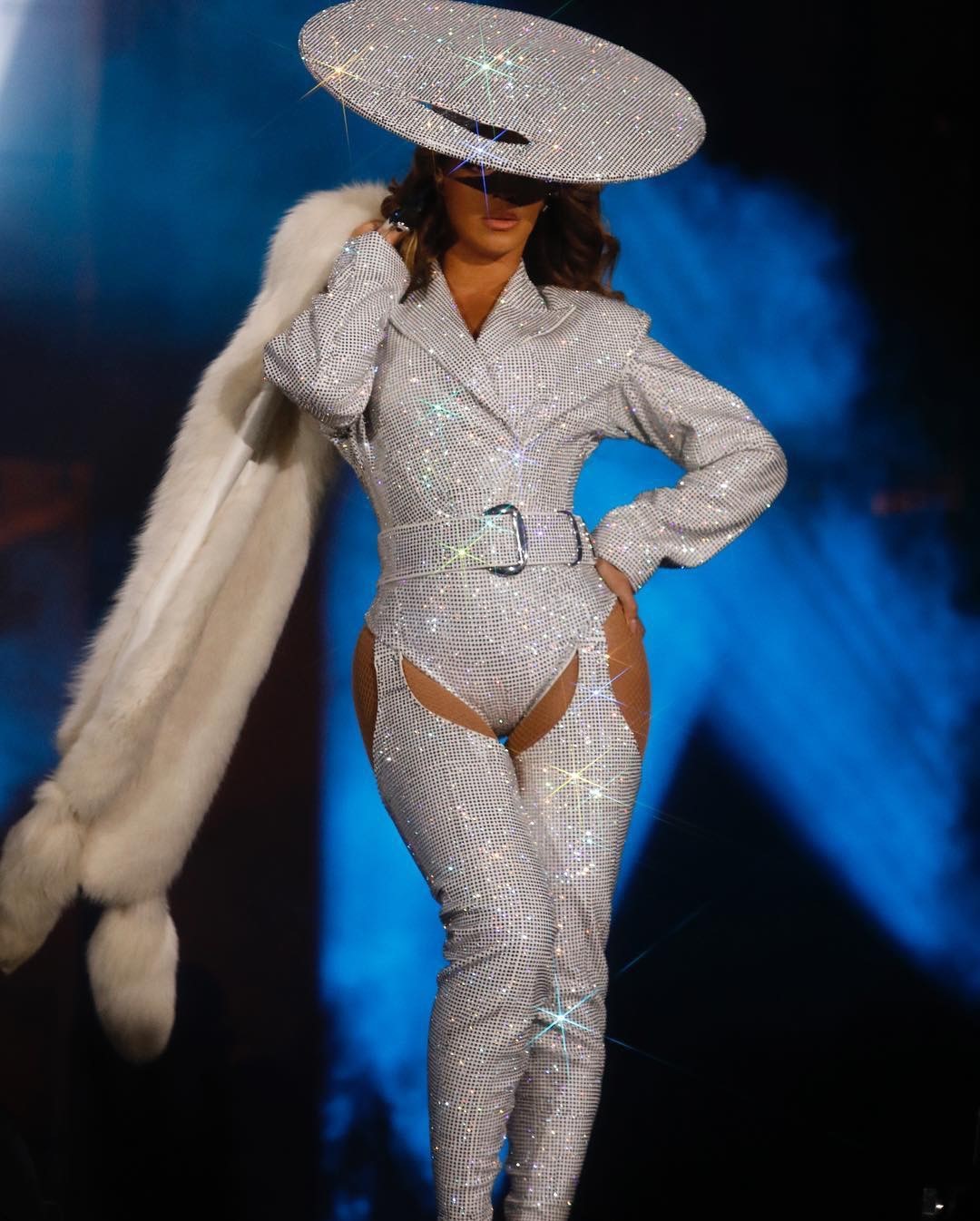 Beyoncé wearing a Mugler custom creation on her “On the Run II” tour.  Courtesy of Mugler

Mugler ships to about 50 doors, primarily in Europe and North America, while it has recently entered Asia with partners in Korea and China. The business is concentrated on apparel, with jewelry the main accessory category to date. Physical retail partners include H. Lorenzo in the U.S., Hudson’s Bay in Canada, Galeries Lafayette Champs-Élysées in France, and Selfridges and Machine A in London.

It plans to start selling directly to consumers via its own e-commerce portal in October.

Meanwhile, the brand is getting a boost from a roving retrospective that originated at the Montreal Museum of Fine Arts in 2019, becoming the sixth most viewed exhibition in the museum’s history, and then traveled to Rotterdam, where it attracted 175,000 visitors. The showcase opened in Munich in May, and it is slated to arrive at the Musée des Arts Décoratifs in Paris next.

“People are very interested in knowing the history of the house, and seeing those amazing haute couture pieces,” Conte-Jodra enthused. “Some of them are works of art.”