Mugler, Nicola Formichetti on to Next Acts

The French firm is parting ways with the superstylist called in two years ago to rev up its women's fashion business. 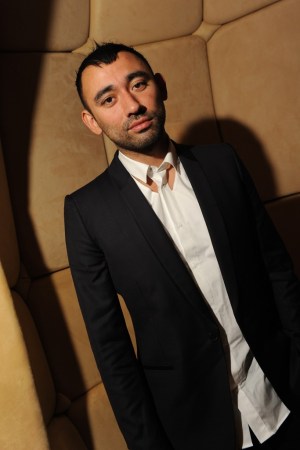 PARIS — Thierry Mugler is parting ways with Nicola Formichetti, the superstylist called in two years ago to rev up its inchoate fashion business.

A globe-trotting multitasker with Lady Gaga on speed dial and more than 200,000 followers on Twitter, Formichetti enlisted the music chameleon to walk in his debut women’s wear show in March 2011 and recently brought the Mugler brand into the lucrative and hotly competitive handbag category.

A brief statement from Mugler characterized the parting as by mutual agreement.

Joel Palix, president of Clarins Fragrance Group and director general of Mugler, is expected to soon unveil a new strategic plan for Mugler “that builds on its highly successful legacy in fragrance and its new momentum in fashion.”

“Nicola has accomplished our original mission of bringing his energy to the brand,” Palix said. “With his talent for communication and understanding modern imagery and design, Nicola has been instrumental in attracting a new audience, which is undeniably crucial for the future strategy of the house. He will be a historical part of the Mugler legacy and known as the force that catapulted us forward.”

Formichetti — who collaborates with magazines such as V; styles celebrities including Kim Kardashian; is creative fashion director at Uniqlo, and has a line of T-shirts and trinkets under the Nicopanda label — is expected to shortly reveal a major collaboration with Italian denim giant Diesel.

A frenetic presence on the Internet who had live-streamed his preparations for the Mugler show and invited design input via crowdsourcing, Formichetti tweeted on Monday, “Big announcements coming this week!!”

For his part, Formichetti called his Mugler stint “a challenge to reinvigorate the house for a new generation and audience, particularly one that has grown up exploring fashion through the Internet.

“I really hope the audience has enjoyed what we have done and appreciated our push to democratize high fashion, not only through the enjoyment of clothing but also through a total, inclusive fashion experience,” he added.

Pressed for his reasons for leaving Mugler, he told WWD, “I wanted to do something else, even bigger, more global.”

While Formichetti carried the creative director title at Mugler, he is not a trained fashion designer and instead oversaw two seasoned talents: Sébastien Peigné, a 10-year veteran of Balenciaga, head designer of women’s at Mugler, and Romain Kremer, who had shown experimental looks for men under his own Paris label, head designer of men’s.

To be sure, Formichetti brought noise and editorial attention to Mugler with his celebrity connections, Gaga runway soundtracks and his constant feed of editorial credits and Mugler-related imagery on his Web site and Tumblr page.

Via Facebook, he found Montreal sideshow performer Rick Genest, who tattooed himself to resemble a rotting corpse, and made him a star. Genest followed up a trip down the Mugler men’s catwalk with a role grinding with Gaga in her “Born This Way” video.

During Formichetti’s tenure, Mugler fashions did not ignite a maelstrom of demand, but made some business inroads.

According to a Mugler spokesman, the women’s line is sold to about 45 retailers worldwide, including ones in the U.S., the U.K., Russia, Ukraine, South Korea, Japan, Hong Kong, Italy and Holland.

The men’s line is sold in 25 stores, including Maxfield, Opening Ceremony, Patron of the New, Isetan, Joyce and Antonioli. The bag line, introduced in February, is carried at a range of retailers in the U.S., the U.K., Japan, China, Italy and Canada, and online.

Owned by Clarins Group and best known for its best-selling scent Angel, Thierry Mugler lost momentum with fashion in the minimalist Nineties, and in 2003, Clarins shuttered the money-losing fashion business, selling its remaining four stores and Anger, France-based factory to Balmain.

Mugler subsequently licensed out its men’s wear to focus mostly on building its fragrance portfolio, which includes the scents Alien, Womanity, Cologne and Amen.

Mugler quietly resuscitated its women’s wear line in 2008, tapping Rosemary Rodriguez, an alumna of the house who had previously been at Paco Rabanne, as creative director for women’s wear and men’s wear. Formichetti, a half-Italian, half-Japanese wunderkind who was touted by Mugler as being “on the cutting edge of international pop culture,” succeeded her.

According to Formichetti, sales of Mugler perfumes increased since he started at the firm, suggesting fashion and perfume remain good business bedfellows.

He said his proudest achievement was giving the Mugler name fresh currency with young people, especially via his collaborations with Gaga and Genest.

“In a way, we had to start from scratch. What we had was a great legacy and DNA,” Formichetti mused. “We were all new to the project, so we were all fearless. We just did it.”