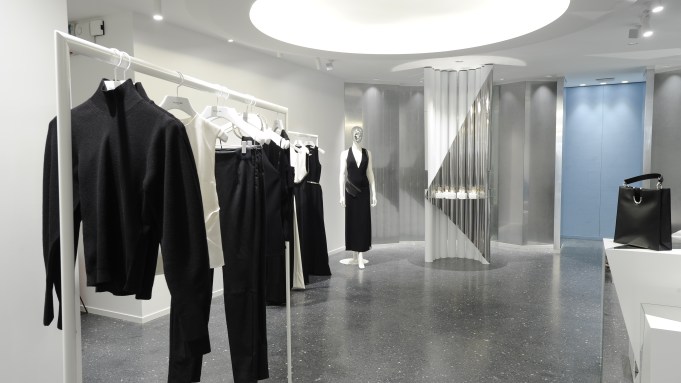 PARIS — “Monumental and angular” — but not overpowering.

“In the end, everything needs to be working for the product and giving the right atmosphere,” he said.

“It’s a good opportunity to translate the vision I have for the brand from the catwalk to a retail space,” Koma said. “It also opens a conversation with the consumer. Having direct contact with them will really help and improve the product range.”

Koma said he drew inspiration for the store from Cedric Gibbons, the Hollywood set designer known for his Art Deco and Art Moderne style, and brutalist architecture.

The former is evident in the round, lacquered table and irregular wall tiles that wink to the 1932 feature “Grand Hotel,” while the stacked and staggered white shelves are reminiscent of a modernist building.

Koma worked with Jean Christophe Poggioli and Pierre Beucler of Paris-based Architecture Associés to express his ideas, careful to ensure that the store would “exude a timeless quality that fits different collections.”

The one-level boutique unfurls as a zigzag of clothing racks set against mirrored walls, pinched in the middle like one of Koma’s waist-hugging cocktail dresses and then opening up again to a seating area, eveningwear corner and a perfume fountain dispensing the high-end Les Exceptions range.

Mugler is owned by Groupe Clarins, which recently unified the brand’s name and logo for its fragrance and fashion businesses.

Koma said the new Mugler boutique — the last one shuttered back in 2002 — is likely the first of several, with New York and London among future priorities. He noted online sales would also be added as a later step.

The store arrives on what had been a lonely stretch of the Faubourg in front of the Bristol hotel, framed by Baccarat and Pierre Cardin boutiques. Coming soon are a Rimowa store and La Grand Musée du Parfum in a space previously occupied by the Christian Lacroix couture house.

The Mugler store puts the focus on special occasion dressing, along with the tailoring that is part of the legacy of the house, which was founded by Thierry Mugler in 1973.

Koma said it’s taken time to build his team at Mugler, but he now feels confident the brand can ramp up its expansion.

“It’s an incredible brand with a very unique heritage, and now with so many young people behind it, we can take it much more global,” he said.

Company executives would not discuss projections for the new boutique, but industry sources estimate it will make 2 million euros, or $2.2 million at current exchange, in retail revenues in its first 12 months.

The store opening comes at a pivotal point for Mugler.

“These past two-and-a-half years have allowed us — both for the fashion and for the fragrance — to restructure our vision and rework the style, the quality of products and be more mature about listening to our end client,” said Sandrine Groslier, president of Clarins Fragrance Group and Mugler Mode.

It also affirms Mugler’s return to fashion, she continued, adding that Paris as this store’s location was a given, since the brand was born in France.

Today, Mugler has 115 sales points globally. Its largest wholesale partners, in terms of revenues, are Net-a-porter in the digital space (e-tail represents about 12 percent of the label’s business) and Bergdorf Goodman/Neiman Marcus and Selfridges in bricks-in-mortar.

Mugler generates 40 percent of its sales in the U.S. and about 20 percent in the U.K., while France is its third-largest market.

“This boutique in Paris is also a way for us to reinforce our presence in France,” said Groslier. “It’s also a real message about listening to the end-client.”

The executive would not discuss turnover, but industry sources estimate that Mugler fashion generates annual wholesale revenues of  6 million to 10 million euros, or $6.7 million to $11.2 million at current exchange.

The brand’s sales gained 15 percent in 2015, while the increase is expected to be more in the order of 10 percent this year, due in part to unfavorable exchange rates with the U.S. and U.K. For 2017, a robust acceleration is expected, not least thanks to the opening of the boutique, said Groslier.

Strong growth potential is seen in Europe as well, including France, Germany, the continent’s southern part and Russia.

“I think we can grow the entirety of our American and English businesses, really develop them very strongly,” she continued.

Mugler is eyeing other product categories — notably accessories and leather goods. The brand already has sunglasses, but Groslier sees good potential in optical glasses too. On the docket later could be shoes and men’s wear, eventually.

“We are full of plans,” she said, adding the key is to find the right moment and partners for them.

Groslier explained that Mugler remains modest in its development strategy overall, with the aim of establishing the brand step-by-step.

“Our objectives are to find opportunities and have the flexibility of a start-up. The idea is not to supplant wholesale, but to maintain wholesale as the central business,” she said.

Also upcoming, Mugler has a project in the works, involving Koma, to showcase the label’s fashion heritage starting in 2018 or 2019.

“We have kept Mr. Mugler’s patrimony intact, with more than 6,000 pieces,” said Groslier.