The brand's creative director is understood to be leaving following disagreements with management over creative and operational strategy. 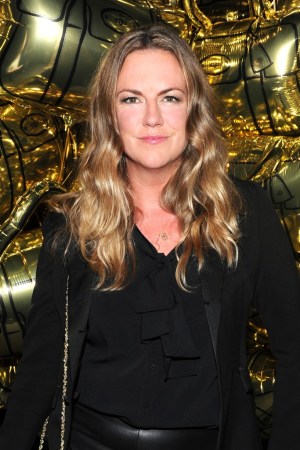 LONDON — Shares in Mulberry Group fell 8.6 percent to 9.75 pounds, or $15.17, in midday trading on Monday, following confirmation by the company that its creative director Emma Hill is leaving.

Mulberry’s statement, issued to the London Stock Exchange on Monday, confirms a report in today’s WWD.

“Emma Hill has informed the company that she wishes to leave after a very successful period at Mulberry, during which she has built a strong and talented creative team working for her,” Mulberry said.

“The main SS14 collection has been completed, and Emma continues to work in the business finalizing the London Fashion Week collection which will be launched on 15 September 2013. The timing of her departure is currently under discussion and has yet to be finalized,” the statement added.

Hill, who showed her first full collection for Mulberry in September 2008, is understood to be leaving following disagreements with management over creative and operational strategy. The designer brought a fresh energy to Mulberry, building up its ready-to-wear, outerwear, footwear, jewelry and accessories businesses, andchanneling the brand’s British heritage — and inborn irreverence. Her departure comes as Coach pursues its hunt for a successor to Reed Krakoff, the brand’s president and executive creative director who will relinquish his role next year. Hill could well be a candidate for that position.

During her six years at Mulberry, Hill launched new designs including the Willow Tote, which comes with a detachable clutch; the Alexa and Del Rey bags, named after Alexa Chung and Lana Del Rey, and added a feminine edge to the collections as well as a big jolt of color in the form of lipstick pinks, mint greens and buttercup yellows.

She channeled her production know-how into the collection, using techniques to make the leathers more lightweight and tempering her use of Mulberry’s famous metal hardware. “I can’t bear hardware that doesn’t feel real,” she told WWD in 2008.

A lover of the outdoors, she put dogs on her runway and designed collections around seaside fairground and enchanted forest themes. Hill also helped oversee the rapid growth of the brand — and its expansion into new markets — along with Godfrey Davis, the former chief executive officer and current chairman. Davis was replaced as ceo in March 2012 by Hermès veteran Bruno Guillon at a time when the brand’s runaway growth began to slow. Mulberry, which opened its first store in Vienna last week, has issued two profit warnings since September and is scheduled to report its results for the 2012-13 fiscal year on Thursday.

Revenues are expected to be slightly down from last year at about 165 million pounds, or $261 million, while pretax profits are expected to be about 26 million pounds, or $41 million. Last year, net profits were 25.3 million pounds, or $40.4 million. All figures have been converted at average exchange for the periods to which they refer. The company blamed the slowdown on a variety of factors, including reduced tourist spending in London, the culling of wholesale accounts and a slowdown in demand among Asian wholesale clients. The British-born Hill — a veteran of Gap, Marc Jacobs and Chloé’s accessories divisions — joined the label in February 2008 following her predecessor Stuart Vevers’ departure for Loewe.