Louis Vuitton on Fifth Avenue is being wrapped for the holidays by Takashi Murakami. 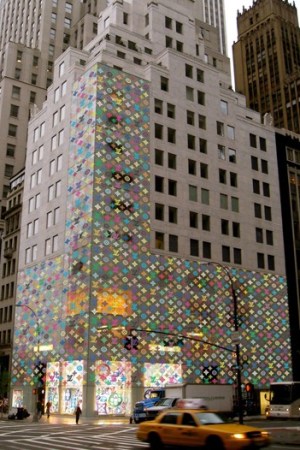 NEW YORK — Louis Vuitton on Fifth Avenue is being wrapped for the holidays by Takashi Murakami.

The French luxury leather goods company is erecting a vinyl installation this weekend that will cover the entire store in Murakami’s iconic Monogram Multicolore print for the house. The installation will begin going up today and will be completed on Sunday.

“The idea to wrap the Fifth Avenue maison in Monogram Multicolore came about earlier this year in an effort to do something truly unique for the holiday season,” said Daniel Lalonde, president and chief executive officer of Louis Vuitton North America.

Lalonde added that the store’s white and glass facade lends itself to a variety of creative ideas.

“We wanted to do something that was festive and exceptional, but at the same time true to the brand,” said Lalonde. “Throughout the past year we have collaborated with Takashi Murakami on a variety of projects and thought his Multicolore print, displaying the Louis Vuitton monogram in 33 cheerful colors, would be a perfect combination of tradition and excitement.”

Vuitton’s New York flagship will be the only one to have the vinyl display, which is signed by Murakami.

The temporary facade isn’t the only gift Vuitton is giving shoppers this season. In late September, the company opened a “Bag Bar” on the flagship’s mezzanine level, replete with bar stools as well as an installation of moving display fixtures to highlight different handbag styles. While the company has the bar concept in other locations, the New York version, designed by Peter Marino and Advanced Animations, is the only one with moving parts.

The bar is located in the former watch and jewelry area, which is now situated in a more high-profile section on the first floor. The department has a loungelike feel, featuring Richard Prince Art and display panels created by artist Mary Kuzma with Marino.

“The recent additions of the Bag Bar and the watch and jewelry area are meant to elevate the customer experience in our store,” Lalonde added.