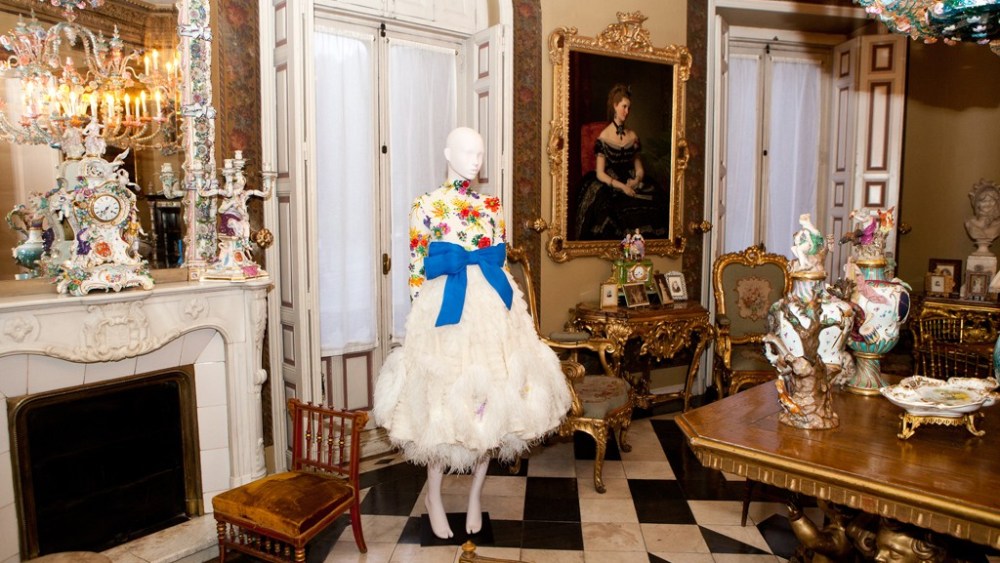 MADRID — Spanish fashion took a trip down memory lane Wednesday at the opening of “La Moda es Sueño,” a 25-year retrospective at the Museo Cerralbo, a 19th-century palace and lesser-known downtown museum.

The exhibition features 117 pieces by 50 designers — including Cristobal Balenciaga and Pertegaz, and contemporary names such as Manolo Blahnik, Sybilla and Adolfo Domínguez.

“The show is a dialogue between art and fashion and the designers who decade after decade have constructed the social skin of our country,” said Joana Bonet, editor in chief of Spanish Marie Claire, an event sponsor along with the Ministry of Culture, Barcelona-based retailer Mango and ACME (the Spanish Designers Association).

The clothes are incorporated into the museum’s opulent collection of European art from the 16th to the 19th centuries, tapestries, sculpture, medieval armor and firearms displayed in adjoining rooms and thematic installations with original wallpaper dating to 1890 and elaborate hand-painted ceilings, agate panels, marble, a vast selection of Meissen porcelain, oversize Venetian mirrors and Murano glass chandeliers.

Agatha Ruiz de la Prada, wearing a pale blue dress in window-pane checks, called the exhibit “simply beautiful, precioso and very romantic, especially at night.” Jewelry maker May Gañán, in Custo Barcelona, praised “the integration of the clothes in a Baroque context, like the Paco Rabanne chain-mail dress with knights of armor and the Manolos presentation looked like a luxurious hotel room.”

Mallorcan designer José Miro, who donated a shapely strapless dress from 2005 with 30,000 Majorica pearls, said he’s accepted a teaching job at the Fashion Institute of Technology in New York. Other designers attending included Amaya Arzuaga in signature black and newer talents Maria Barros and Rabaneda who, at 26, is the youngest designer in the retrospective.