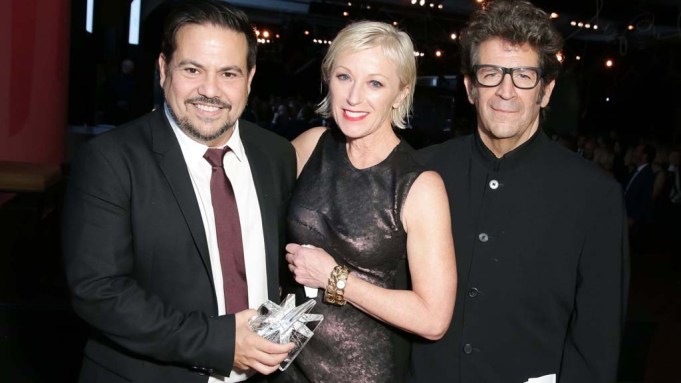 With the annual event in its 15th year and the Upper East Side museum set to reopen in December following a $91 million reboot, NDA host and Cooper Hewitt director Caroline Baumann was focused on the future, bringing guests up to speed about the museum’s new Interactive Pens, which will be given to every visitor. Oversize 3-D printouts of the pens and squiggly neon lines were suspended from the ceiling throughout the David Stark-designed space. In sync with the futuristic feel, “The Secret Jazz Band” played 3-D-printed instruments during cocktails at the Pier Sixty event, and the Stephen Petronio Company offered a modern dance in Narciso Rodriguez-designed costumes. Even the speed of the program — 11 awards were doled out in 35 minutes — was impressive. Etsy’s creative director Randy J. Hunt needed less than three minutes to accept the Corporate and Institutional Investment award. He noted how the nine-and-a-half-year-old company now has 40 million members who support more than 1 million shops around the world. Last year alone, those shops sold $1.35 billion worth of merchandise.

Before his copresenter Cindy Sherman spoke, artist Robert Longo said of Fashion Design winner Rodriguez, “Narciso is an artist, but his art does not hang in an art gallery or museums but lives in the real world and is worn by real women.”

Sherman described the designer as “a firm believer that a woman should wear the dress and not the other way around.”

For his part, Rodriguez told attendees how he was “really choked up” when Baumann phoned with news of his win. He also acknowledged that working in design can be difficult at times but also “positively rewarding, as it is tonight.”

Ben Stiller video-ed in his introduction for Interior Design winners Roman and Williams, whom he first met when they created the set for “Zoolander” and, later, hired to renovate his Los Angeles home. That project prompted the duo to start their design firm. “I understand, after meeting Michelle Obama last week, they landed a job redecorating the White House, which is great. The Obamas can stay at the local Embassy Suites until they approve some things, because Robin convinced President Obama to use some rare form of teak from Sri Lanka,” Stiller said.