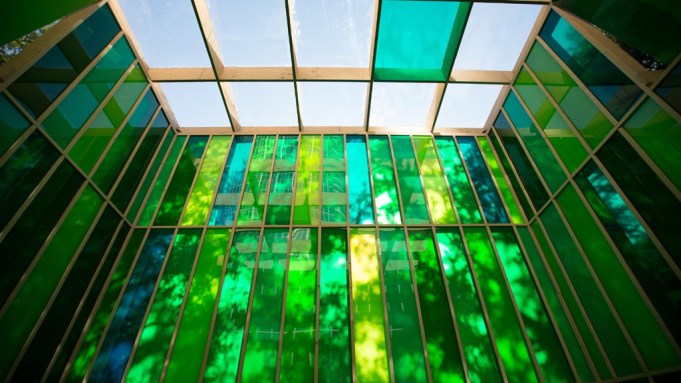 DALLAS — There’s a simulated fountain of money at NorthPark Center and a great mound of earth about nine miles south that have something in common: They are two of the 10 artworks commissioned to celebrate the 10th anniversary of the Nasher Sculpture Center.

Charles Long’s “Fountainhead” and Lara Almarcegui’s “Buried House” debuted Saturday along with most of the other pieces in “Nasher XChange,” a four-month citywide exhibition that strives to extend the Nasher’s reach and diversify its audience.

The museum — a must-see for many designers who visit Dallas — was built by NorthPark founder Raymond Nasher to house the collection of works by Pablo Picasso, Henri Matisse, Henry Moore and others that he assembled with his wife, Patsy.

The goal is “to make great art accessible to the public,” explained Nasher director Jeremy Strick. “We wanted to evoke the city’s multiple geographies.”

Alfredo Jaar took the outreach to heart. The artist arranged to record the first cry of newborns at three area hospitals, rewarding each infant with a lifetime membership to the museum. Inside a plywood and green Plexiglas pavilion in the Nasher’s garden, each cry erupts at the time of that baby’s birth. As more cries are recorded over the length of the exhibition, the sound of “Music (Everything I know I learned the day my son was born)” will intensify.

“By the end there will be 5,000 to 7,000 baby cries,” Jaar predicted. “I am responsible for these thousands of members who will never pay. I’m hoping to change the demographics of this museum.”

Long’s “Fountainhead,” which projects dollar bills randomly flowing down a white, pockmarked monolith, invites viewers to affect it by donating to charity at one of three small kiosks surrounding it. When the money registers, a coin appears to splash into the fountain and scatter the bills. The piece is located in the plaza in front of Louis Vuitton.

Noting he was fascinated by how “the boundaries between art and conspicuous consumption were blurred” at NorthPark, which has displayed major artwork since the late Sixties, Long said he designed the fountain to foster giving.

The “Buried House” was intended to spark a narrative about “the past and future of the terrain,” Almarcegui explained. The Spaniard found a house slated for demolition in one of the oldest areas of Dallas and hired people to bulldoze it, dump all the debris into a square chasm in the backyard, and cover it with the excavated dirt.

“I’m very aware this is unique,” she said, standing before what one neighborhood resident described as “a pile of dirt.” “The neighbors thought it was hysterical.”

Another conversation starter is Rick Lowe’s “Trans.lation,” the monthly pop-up market he established in an attempt to unify the diverse Vickery Meadow neighborhood, a densely populated area of immigrants where 27 languages are spoken.

Among the other projects, Ruben Ochoa crafted “Flock in Space,” an organic cluster of galvanized steel fence posts and concrete footings erupting from the land at the Trinity River Audubon Center, and Liz Larner created a curvaceous 3-D “X” in mirrored stainless steel for a courtyard at the three-week-old Edith O’Donnell Arts and Technology building at the University of Texas at Dallas, which is actually in Richardson.

“X is a form that represents change,” Larner noted. “It’s a variable. It was all done with 3-D modeling and computers, and this is going to be the place to do that.”