The show at the Peabody Essex Museum in Salem, Mass., runs through March 6. 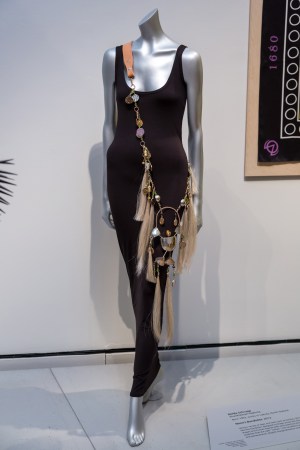 In the co-opt vein, the show boasts a “Louis Vuitton” quiver of arrows made by Cree artist Kent Monkman, who created his version of the Murakami LV canvas. There are Seattle artist Louie Gong’s “spirit wolf” Chuck Taylors and a show-stopping pair of Christian Louboutin boots hand-beaded by Jamie Okuma, of Luiseño/Shoshone-Bannock ancestry. Okuma designed the boots’ motif of swallows and rose hips based on childhood memories of life on the La Jolla Reservation in California.

Though they would make for a fabulous night out, none of Okuma’s shoes — which also included Giuseppe Zanottis transformed by beads — have been worn. Every pair has been purchased by museums —the Smithsonian and the Nelson Atkins in Kansas City, Mo., to name two. Okuma sources European century-old beads and creates the design organically as she goes, without aid from a computer.

The show also includes beadwork from Choctaw artist Marcus Amerman, best known for beading a portrait of Janet Jackson for Rolling Stone magazine. For the Peabody Essex show, he supplied a cuff bracelet with a comic-art Tonto and Lone Ranger.

The show has plenty of good reinterpretations of classic Native American motifs, including Margaret Wood’s Navajo blanket dress and a traditional bandolier re-imagined as chic jewelry, slung across the body and fringed with horsehair tails and coins.

The exhibit opens with an installation of floating parasols from Taos Pueblo designer Patricia Michaels, a “Project Runway” finalist.

According to PEM curator Karen Kramer, contemporary Native American art is “massively under-recognized in the museum world, but is a burgeoning field.” Kramer noted that the museum’s Native American artifact collection dates to the 1700s, when spice trade ships would leave Boston, sail to the Pacific Northwest coast and remain there for two to three years, trading with Native tribes and stocking their ships with otter pelts, which were fashionable in the Far East.