These designers are inspired by their surroundings. 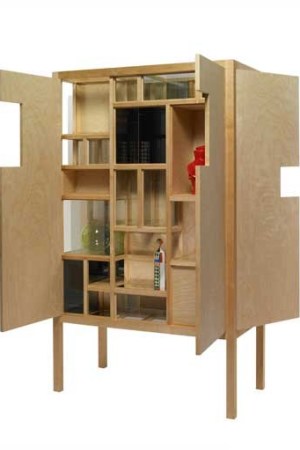 These designers are inspired by their surroundings.

Iceland’s industrial designers are prized for their whimsical take on everyday objects, such as coat hooks in the shape of whalebones or geyser-like chocolate fountains. They’ve also made chilly Reykjavík a red-hot destination for design aficionados by opening a plethora of concept stores. Here, a look at some of Iceland’s designing women.

Gundun Lilja
From a “curiosity cabinet” featuring a warren of secret compartments to a rocking chair that relates the island’s environmental concerns, Gundrun Lilja’s designs are as functional as they are allegorical.  “It is the soul of my nation,” she explains from Studiobility, which she founded with her husband, Jon Asgeir Hreinsson, in 2005. “I traveled throughout Iceland and met real characters and transformed them, symbolically, into objects that derive from their personality.”

A graduate of the Eindhoven Design Academy, Lilja, who also collaborates regularly with Dutch designer Jurgen Bey, was tapped by Paris’ prestigious Tools Galerie to exhibit and produce limited-edition pieces.  “In Iceland we believe in inner beauty, things are never as they seem,” says Lilja, whose most recent project is a flower made from Icelandic lava. “In our folk tales, we believe hidden people live in stones. Even though the stone has a rough exterior, it has hidden beauty within.”

Katrin Olina
Katrin Olina attempts to capture Iceland’s mystique through illustrations. “There is a fantasy element to life here; everything is very mystical. My characters represent that, there is a duality about them, which balances between mischievous and sweet,” she says. Olina studied industrial design in Paris and trained with luminaries such as Philippe Starck and Ross Lovegrove before moving to Hong Kong, where she lived for over five years. Today, Olina moves between product design and a two-dimensional graphic language, which straddles art, illustration and graphic design.

“We’ve grown up outdoors, there is nothing better for the imagination,” she says. “The nature here forces everyone to look inward. We live in an introverted state.”

Olina’s whimsical illustrations of magical creatures appeared on posters for the 2007 Montreux Jazz Festival, making her the second woman to design the prestigious poster after Niki de Saint Phalle in 1984. Meanwhile, Olina applied her graphic designs to ceilings and floors at Skin Aesthetic Cosmetic Surgery, a cosmetic surgery clinic in Florence, and is currently working on illustrations for a bar in Hong Kong with Michael Young.

Sigridur Sigurjónsdóttir
A professor of product design at the Icelandic Arts Academy, Sigridur Sigurjónsdóttir is a driving force in bringing international attention to Reykjavík’s design scene. “Our houses are made from mud and turf and we have no real production history, but people are no longer embarrassed about our culture,” says Sigurjónsdóttir. “We are just starting to establish a real identity with our cultural inheritance tied to story telling.”

Proximity with nature and use of the country’s natural resources are essential to developing the category, according to Sigurjónsdóttir, who, with her students, works closely with Icelandic farmers in order to develop designs.

Tinna Gunnarsdóttir
“I translate my memories and experiences of Iceland into my work,” says product designer Tinna Gunnarsdóttir, who pointed to an aluminum coat rack inspired by whalebones. “We had so little production, children in Iceland used to play with toys made from bone.” With a masters degree from the Domus Academy in Milan, Gunnarsdóttir has participated in numerous design shows across the map. “There are no design companies in Iceland, which is our disadvantage and our advantage,” she says. “We have to rely on our own devices. We are forced to be independent and creative and rely on what we have—nature.”  Take, for example Gunnarsdóttir’s Chrome Cube garden table, which is a mirrored cube meant to reflect its surroundings to the point where it is almost invisible.