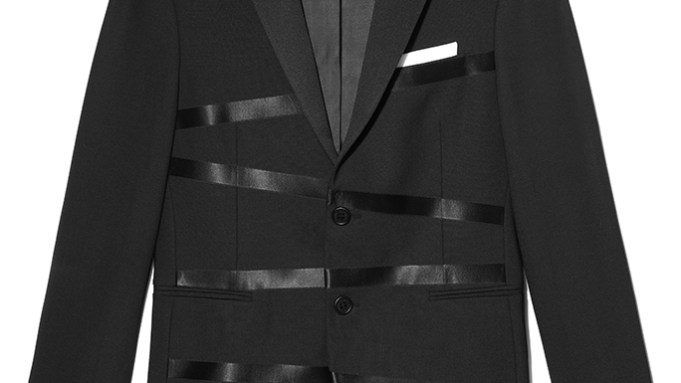 LONDON — Neil Barrett hadn’t taken a proper look at his scattered archives for about two decades until Harvey Nichols urged him down memory lane — and the result is a 12-piece exclusive capsule for the store.

Originals: Vol #1 will also roll out to the retailer’s other stores in Britain.

Barrett certainly isn’t short of archives. “I have three in Italy, two in Britain, and for 18 years I haven’t seen them,” the designer admitted. “It’s about 25 years’ worth of design work.”

He said the idea for a collection was born after a conversation with Anita Barr, group fashion buying director at Harvey Nichols, although he’d already begun looking to his past for inspiration for the fall 2017 collection.

“I was born in the U.K., my inspirations are British, so for this collection I pulled from the archive — or my memory — if I couldn’t actually find it in the archive,” said Barrett, who studied at Central Saint Martins and the Royal College of Art in London.

His company, which he founded in 1999 after working at Gucci and Prada, is based in Italy and he lives between London and Milan.

The pieces that Harvey Nichols picked are from the past 10 years, and Barrett believes they’re as wearable now as they were then. “My fits are pretty consistent and my color palette is pretty restricted — it’s very Savile Row.”

Looks include shirts and jackets adorned with bonded silk bands like tuxedo stripes; tailored trousers with a ribbed cuff around ankle; a jacket with a magnified and deconstructed, unraveling chevron pattern, and a buffalo leather jacket. Barrett said Brad Pitt wore the original during the press tour of his film “Mr. & Mrs. Smith.”

Barr said the collection features some of the designer’s key pieces from the last 15 years. “Neil’s clean and modern approach to design teamed with his technical expertise, has made the brand one of our fastest growing men’s wear labels at Harvey Nichols.”

Barrett’s business is about 70 percent wholesale, with the balance coming from retail. It sells through 400 doors worldwide and 15 monobrand stores, the concept of which was developed with Zaha Hadid Architects.

Barrett has other projects on the boil, among them a new ski collection that will land in stores in October. He described it as “crazy detailed,” with the sort of pieces that will take a man straight from the slopes into the bar. He said he’s working with the same factories he used 16 years ago when he launched Prada Sport.