The British-born designer plots a controlled path of growth for his men's collection. 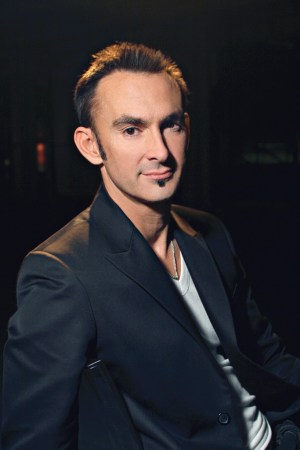 Bungee jumping is probably not a pastime most would associate with Neil Barrett, the poised, soft-spoken designer who has been building his fashion company slowly and steadily since 1999. His speech is sprinkled with chestnuts like “Everything comes with time” and “If you are patient and consistent, you will be rewarded.”

But Barrett himself brings up the subject of bungee jumping during an interview at his Milan showroom and headquarters, saying he wouldn’t be averse to trying it, under the following conditions: “Only if I’m supersure it works and if somebody else has tested it. I learn through the success or mistakes of others.” The British designer looks superbly fashionable (though not particularly X-treme) in a cozy, ribbed gray sweater and drop-crotch black pants. “I’m a cautious person, but instinctive,” he says. “I like to take a risk, but I need to have something to fall back on.”

This appears to be the same reasoning Barrett applies to his business and the strength behind the growth of his brand. In 2011, a notoriously challenging year, the label’s retail sales gained 38 percent to 72 million euros, or $100 million at average exchange, compared with the previous year. This mirrored a 38 percent jump in revenues in 2010.

With his labor-intensive, tailored looks, his deep research into hybrid fabrics, his mixed-media designs and precise cuts, the designer has garnered a cult following. Celebrities like Ewan McGregor, Colin Firth, Joe Jonas, Orlando Bloom and Mark Ruffalo have been spotted in his designs. Barrett’s fall show in Milan was a lineup of standout tailored pieces of specially engineered fabrics that combined Prince of Wales with micro-tweed or chevron with micro-houndstooth, oversize volumes and a dose of his signature “young and fresh” vibe, epitomized by tuxedos mixed with hoodies and shirts with gunmetal embroidered fronts.

“Neil Barrett is one of the most influential designers today, and one of my personal favorites,” says Eric Jennings, vice president and men’s fashion director for Saks Fifth Avenue. “His unique take on tailoring, his soft constructed sportswear and his impeccable leather jackets fit the needs of the modern man. His performance at Saks is solid, and we look forward to growing the line.”

Barrett is reaping the rewards of investments made in Asia years ago, ahead of many of his peers. China, Japan and South Korea are his primary men’s wear markets, together with Italy, the U.S. and France. His first store opened in Tokyo in 2008, followed by one in Seoul last June. That store is operated through a distribution agreement with Korea’s LG, signed last year, that will allow the designer to open more outposts in the region. Another store opened in Hong Kong in September, in the Landmark building, thanks to a deal with Chinese giant Joyce. All of Barrett’s retail boutiques are designed by famed architect Zaha Hadid. The brand is available at 500 points of sale globally.

Barrett, who retains total control of the brand, has been resisting the siren call of private equity funds and investors. Three years ago, the designer said he was looking for an investor to develop his business. The reversal came when he realized he needed to focus on organization, production, timing and deliveries first and foremost. “Sure, with a backer, I could have opened stores around the world, but could I have provided these venues with the right products, and on time?” he wonders. Barrett asked for advice — “Always turn to more than one person at a time, and never a friend,” he says — and realized the value of his company would not have been as high if he had taken on a partner at the time.

“This person discouraged me from investing in retailing. Instead, I focused on building Factory — the name of which has [Andy] Warhol implications,” says Barrett. Factory, set up in 2009, is the name of the designer’s manufacturing plant — or “industrial platform” as he calls it — in Tuscany’s Fucecchio, between Pisa and Florence, which generates 180,000 pieces a year. Eighty percent of the brand is produced in- house, with the remaining outsourced to area manufacturers.

Barrett, who shuttles between London and Milan, is a staunch believer in Italian artisanal skills and what he defines as the “amazing” Made in Italy craftsmanship, which frees him up to explore new fabrics and design details. “I enjoy developing engineered fabrics, two different designs into one, woven together. It all makes for individual and unique pieces, which are also more difficult to copy,” explains Barrett.

The fact that such craftsmanship elevates the brand’s retail prices is not an issue, he claims. “It’s a matter of balance,” says Barrett. “[Miuccia] Prada gave me an education on balance. Price point, quality, design detailing and fit — you must never go too far with one of them. There should be sufficient desirability, without being too extreme.”

Barrett, who worked with Prada and at Gucci before launching his own label, also credited the Italian designer with planting the seeds of his solo venture. “I wasn’t intending to start my own line, it just happened, but [Prada suggested you] should leave only for your collection, there is no reason to go work for another company, and she was right,” says Barrett, who left on such good terms that he had his line produced under license by the Italian designer’s plants in Tuscany when he started. He staged his first men’s wear show in Milan in 2002, and added women’s wear in 2007, which he shows in Paris.

Men’s wear currently accounts for 65 percent of sales; women’s, 30 percent, and accessories, 5 percent. Barrett says that while he’s proud that apparel is his core business, he sees strong potential in other categories. He’s equally pleased that his clothes are recognizable, even without visible logos, and that they’re demographically agnostic: “I find it fantastic, rewarding and satisfying that they can fit any shape, age or form. They are garments that are cool but that can be worn by a cross section of age and taste, from trendy club kids to lawyers,” he says.

Meanwhile, Barrett’s retail business appears poised for further growth. As of now, he operates no stores in Europe or the U.S. — a market he says is especially “strong” for his brand. “We started three seasons ago, and it’s now our number-five market,” he says. The designer reveals he has a “major” retail project in the cards but won’t disclose details until contracts are signed.

“I don’t need an investor, and I’m self-sufficient,” says Barrett, who has secured a 65,000-square-foot space in Milan that will soon house his offices and showrooms in one location. Barrett, who is an interior design buff, is working on the blueprints and hopes to move in by the end of the year.

“Fashion is a wonderful, creative business. It’s fantastic to do. And the beauty of getting older is that one is more focused,” says Barrett, who continues to chart a course of “steady growth, no crazy increase, no crazy fall.” While he’s open to the idea of licenses or product extensions, these aren’t a priority for the designer, who believes a brand “must first establish itself” and be more visible.

When asked where he sees the company in 10 years, he replies without hesitation, “My passion is architecture, modern furniture, designs from the 1920s and 1930s, home design. It’s a dream to have a home line, but it takes time,” he says. “I’d love to design a hotel concept or an apartment block. If I haven’t done it in 10 years, I’m never going to.”