The luxury retailer launches the 84th edition of Christmas Book. 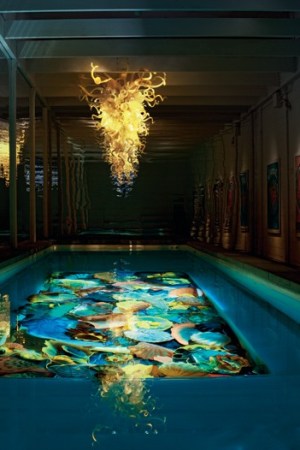 DALLAS — Talk about a wide range of price points.

Neiman Marcus on Tuesday unveiled the 84th edition of a holiday season ritual, the retailer’s Christmas Book, offering requisite fantasy gifts such as a $1.5 million swimming pool floor by glass sculptor Dale Chihuly, as well as a $15 candlewick trimmer.

For the second consecutive year, almost half the items are priced at less than $250, said Gerald Barnes, president of Neiman Marcus Direct. In an acknowledgment of tough economic times, there are 63 gifts for $100 or less, including Tweezerman red crystal tweezers, Ugg men’s slippers and a pair of Waterford crystal Champagne flutes.

Barnes unveiled 10 fantasy gifts at the retailer’s flagship here as red crushed velvet curtains dropped in front of six display windows and the store’s entrance on Ervay Street. The centerpiece was a 2011 Chevrolet Camaro convertible for $75,000.

“Isn’t that a beautiful car,” remarked Burt Tansky, who is retiring today as president and chief executive officer of Neiman Marcus Group and is the owner of a 1960 Jaguar antique and five other cars.

For those who opt not to drive, there was a $4,500 Tory Burch-styled Worksman tricycle for adults.

Neiman’s marked the 50th anniversary of its His & Hers holiday gifts by creating a one-of-a-kind colored diamond and 18-karat gold bracelet for $248,000, featuring charms of 11 gifts from the past, including a Chinese junk, an airplane and a robot. Each charm has a marquis-cut diamond in pink, blue, orange or yellow. The 164-page catalogue also commemorates the anniversary with a $50 coffee-table book of photographs, five $48 holiday ornaments and pictures of past gifts.

The store’s latest His & Hers gift is a $250,000 MetroShip luxury houseboat with translucent thermal walls. And among the most lavish presents is a $125,000 Avion tequila party for 75 people styled by celebrity event planner Colin Cowie with chef Todd English, mixologist Yusef Austin and DJ Donna d’Cruz.

Neiman’s has the bases covered for lovers of art, music and photography, offering a $9,500 three-day tour of Marfa, the west Texas desert town that has become a hotbed for contemporary art; a $7,500 handmade gourd ukulele by Los Angeles guitar maker Danny Ferrington, whose client list includes Keith Richards, Elvis Costello and Tony Blair, and a limited edition $17,500 Leica M9 digital camera. For kids, there is a $15,000 fully edible 4-by-5-foot gingerbread playhouse built by the confectioners at Dylan’s Candy Bar.

The only new category in the book is beauty tools, a two-page spread of devices such an oscillating body buffer. “They are an important part of our assortment this year,” Barnes noted.

The Christmas Book and the retailer’s entire Web site are available on the iPad.

In other news from Neiman’s, the company’s annual report, filed last week with the Securities and Exchange Commission, revealed that Tansky’s compensation more than tripled in his final full year at the helm, and successor Karen Katz’s pay almost doubled.

Tansky’s total compensation for the fiscal year ended July 31 was $7.9 million, 3.3 times his 2009 take of $2.4 million. His salary remained unchanged at just under $1.5 million, but he received option awards valued at $3.4 million, nonequity incentive plan compensation of $2.3 million and a discretionary bonus of $60,000, none of which he got in fiscal 2009.