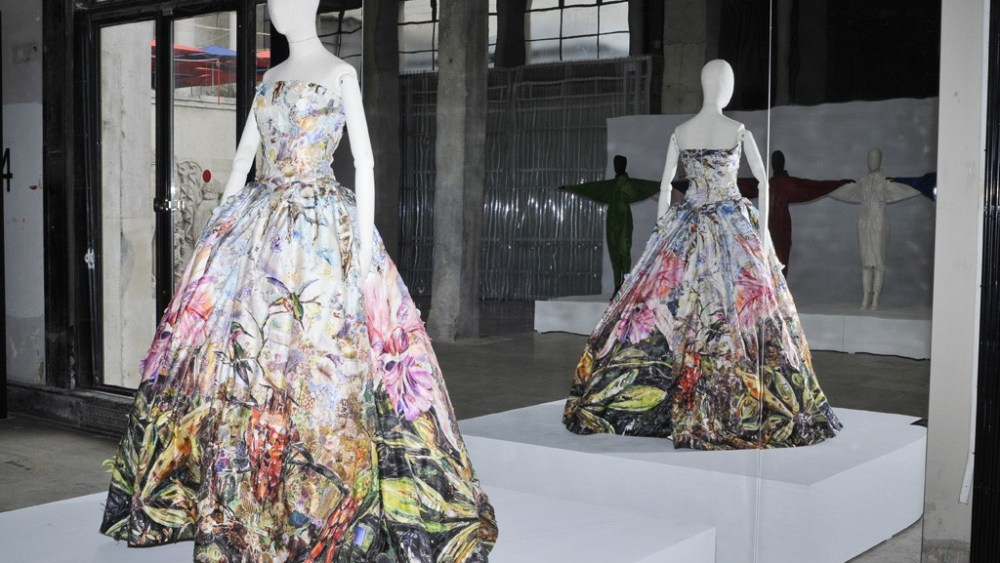 “It is the first time this has ever been done,” Engman told WWD, speaking at Paris’ Palais de Tokyo museum, where the pieces were displayed on Wednesday, during couture week. Order-taking started then, too.

“I’ve asked artists to conceive of garments that reference their artwork [and] that is entirely by them,” she continued. “There is no pairing with a fashion designer.”

None of the artists had created clothes before. Each submitted a detailed sketch of what they wanted to create.

“To me, it was really important to have different genres represented, because it was such an experiment,” said Engman. “But I think they all show how versatile they are.”

Muniz is best known for his photography and Condo as a painter. Multimedia artist Thomas’ piece sprang from Fifties ballgowns.

“I also wanted to incorporate some more contemporary elements into the dress and use some of my influences and inspirations from designers that I actually either wear or like, such as Comme des Garçons or Yohji Yamamoto — in that sense of layering and deconstruction,” Thomas explained, adding she used layers similar to how she creates her collages and paintings. “You can see all of the ways in which the painting was made. You can see the drawing aspect, you can see the pencil line revealed in some of it, and then the watercolor paint, the oil paint to the enamel to the rhinestones.”

Similarly, it was important for Thomas to expose the material in the dress, including crinoline and two types of duchesse satin. “One was hand-painted on, then flipped to the reverse, so you don’t necessarily see the brush strokes, but they’re revealed through the material,” she said.

The project has whetted Thomas’ appetite for more in fashion. “I definitely have some other ideas for shoe design and working in shoes or something like that,” she said. “It’s definitely something that I want to explore more.”

Condo’s piece includes staples made of 24-karat gold pulling together his parka-baby-doll dress.

“His reference for the staples is what’s used to stretch canvases,” Engman said, also noting that the head shape in gold foil at the back of the dress makes it looks like someone had been sitting on one of Condo’s paintings.

Abramovic fashioned “Energy Clothes,” involving seven jumpsuits in different colors for every day of the week. It’s a concept Abramovic has worked on for two decades. Each day is linked with a celestial body. Monday is dark blue (like the moon), while Tuesday is red (like Mars), for instance. And every outfit has seven small magnets held in pockets strategically placed to denote certain energy points on the body “to boost energy,” Engman noted.

Engman sees all the works as performance pieces.

“Like Marina said, ‘Whomever wears these garments becomes an extension of my art performance practice, in a way,’” said Engman.

The clothes are priced in-line with the artists’ market rate in the art world, according to Holli Rogers, fashion director at Net-a-porter. She believes the time is ripe for such a project, due to the resurgent interest in couture and the burgeoning crossover between art and fashion.

“This project represents the future,” said Engman. “These are really fine art works created by visual artists, but that are pieces completely wearable.”