A look at up-and-coming designers with diverse Asian roots.

By Amanda Kaiser
with contributions from Lee Hyo-won
on October 13, 2016
View Slideshow 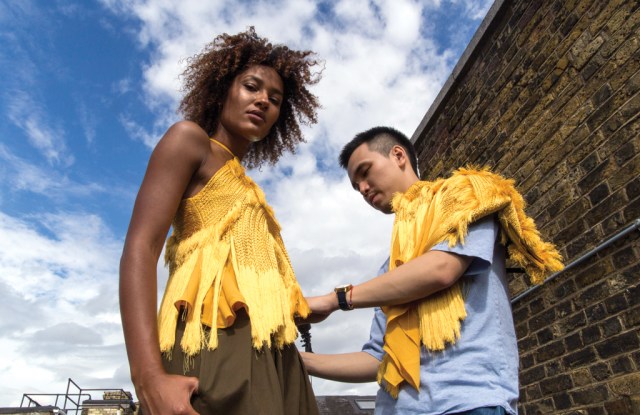 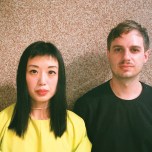 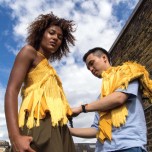 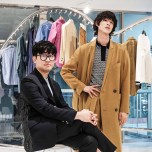 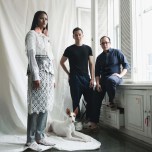 Australian design duo Kain Picken, 36, and Fiona Lau, 31, met in Melbourne, cultivated their careers in Berlin and ultimately established their studio in a quaint village outside the city of Shenzhen, a bustling hub of the tech industry with close economic ties to nearby Hong Kong.

The pair’s peripatetic lives led to the creation of Ffixxed Studios, an art project of sorts that evolved into a full-fledged ready-to-wear line in 2010. The pair work natural materials like woven bamboos, cotton and denim, much of them sourced from Japan, into comfortable, everyday pieces with an “element of surprise,” as Picken puts it. For example, press studs figure prominently in the spring collection so the sleeves of an overcoat or the front panel of a skirt can be partially or fully detached.

“We’ve slowly evolved, you know, because I think we’re highly influenced by the environment we’re in,” said Lau, who said the arts scene in Berlin and “DIY” brands like Austria’s Fabrics Interseason heavily influenced the couple’s early work. “But now, we’ve moved to China and the mountains and it’s more about…a relaxing lifestyle.”

Picken is an artist by training and a graduate of the University of Melbourne’s Victorian College of the Arts. Lau studied fashion design at RMIT and completed an internship in Berlin at arty fashion house Bless. Through the years, both of them have nurtured an appreciation for Japan and designers like Yohji Yamamoto and Rei Kawakubo of Comme des Garçons. Lau studied abroad in Nagoya during high school.

“It isn’t generally considered the most fashionable city. But coming from suburban Melbourne at the time, it seemed really exciting and inspiring,” Lau recalled.

Japan also played an important role in the growth of Ffixxed Studios’ business. From the beginning, the pair worked with Japanese distributor Dune and the country still represents a major market for the brand. But Kain noted that the rapid growth of the Chinese market and its consumers’ growing demand for homegrown brands has altered Ffixxed Studios’ strategy significantly.

“When we started the brand in 2010, China in terms of a market was never really on our radar,” he said, noting that the country accounts for more than half of the brand’s sales.

Ffixxed Studios sells at Lane Crawford in Hong Kong and China, as well as Opening Ceremony in New York and Beams Gallery International in Japan. Prices range from about $150 to $650.

“With the growth in China, we shifted our focus away from Europe and the United States,” Picken said.

A riot of boldly colored tie-dyed clothes and cardboard sculptures made their way down the runway for Craig Green’s 2014 spring offering. Xu Zhi Chen was one of the people who spent hours knotting the fabric and soaking it in vats to make that collection a reality.

“I worked on that [collection] the most,” 24-year-old Chen recalled. “We dyed I don’t know how many pieces.”

That attention to detail and craftsmanship profoundly influenced Chen, a Central Saint Martins graduate who grew up in Shenzhen, just over the Mainland Chinese border from Hong Kong.

“Throughout this journey with Craig Green, I really was so inspired, motivated by crafts and how you treat fashion and garments and just fabric,” he said.

Chen said that experience inspired him to start his own brand, which he did for spring 2016. That, along with his subsequent efforts for the next few seasons, featured highly textured pieces rife with intricate fringe braid work and embroidery. For spring 2017, he turned out a fringed, braided halter top and matching skirt in a gold viscose with a silky feel. He created a similar look in varying shades of blue wool for this year’s Woolmark Asia competition.

Chen said he has always been interested in art, graphic design and making things. His grandfather, a calligrapher, has inspired him. Just as Chen spent hours twisting fabric and dipping it into dye for Craig Green, he also invested time in experimenting with yarn and textiles to perfect his braiding technique. At first he bonded yarn to fabric, but that made the pieces too stiff, so he learned to braid the fabric or yarn first and embroider it to a material base to make something more wearable.

The London-based designer said he is out to capture customers who appreciate the time and detail he puts into his clothes. While he has worked on women’s wear for the first three seasons of his brand’s life span, Chen said he’s discovered that some men are buying his pieces, as well. The designer, whose résumé includes a stint at J.W. Anderson, plans to launch a men’s line in June.

Xu Zhi’s prices range from about $182 to $1,815. Sales points include Lane Crawford in Beijing and Hong Kong, Hankyu Hanshin in Osaka and Opening Ceremony in Tokyo. The brand also has a foothold in Nigeria through Alara Concepts in Lagos.

When Toton Januar Heri Nugroho and Haryo Balitar were growing up in Indonesia, they did not spend much time thinking about their heritage. Like others of their generation (both men are 38), they looked to Western fashion magazines for guidance on what was cool or stylish.

“We started to take our own culture for granted,” Nugroho recalled.

That all changed when the two enrolled at Parsons The New School for Design and started getting to know their fellow students from around the world. Nugroho said his classmates were keen to learn more about his country, which is known for its batik and ikat fabrics.

“I [thought] that should be something that I bring into my work as well because that’s part of me, part of my identity,” said Nugroho, who worked as a model and as a member of the Indonesian boy band Weebe before he set his sights on becoming a fashion designer.

He and Balitar, his business partner, founded their fashion house in 2012 with what Nugroho calls a mission “to translate Indonesian culture and heritage into contemporary women’s wear.” It’s a strategy that is earning plaudits. This summer, Toton won the Woolmark Asia Prize for women’s wear with a look featuring a hand-embroidered jacket and hand-loom-woven pants.

The pair recalled that it was tough going in the beginning. Clothing that veered too ethnic in style was not taken seriously in Indonesia at that time, and it was a challenge to establish contacts in the local textile industry after spending three years living in New York. Nugroho said some artisans he knew before he moved away were no longer in the business due to economic hardship.

“I was scraping for people to work with me basically,” he said. “I remember some of the samples I sewed myself and I actually slept with a bunch of rolls of fabric under my bed.”

The two persevered and have built up a business that sells at Al Ostoura in Kuwait, S*uce in Dubai and Le Charme de Fifi et Fafa in Tokyo. They also have a stake in a multibrand store called Ara in Jakarta that carries their brand. Prices range from about $145 for a button-down shirt to about $507 for an embroidered dress.

The duo said retailers in Paris are expressing interest in the brand and they are hopeful it will grow, but in a measured way. Balitar said he admires the way Dries Van Noten has grown his business and he hopes to follow a similar path for Toton.

“I think for us, success is to be able to do what we’re doing now and have enough returns to sustain

South Korean designer Hyun-min Han can be found around the clock in his Seoul studio, but once a week the creative mind behind edgy men’s brand Münn escapes to a nearby art-house cinema. Since his college days studying art and graphic design, the 32-year-old has espoused a personal style stolen from Sixties films.

“I strutted around campus in classic three-piece suits complete with a bow tie and pair of retro round-rimmed glasses,” said the designer, who won this year’s Woolmark Prize Asia for men’s wear with a look incorporating strips

“I turned to fashion design in order to create branded content under my own name, and naturally was drawn to men’s suits,” said Han, who worked at local men’s wear labels Wooyoungmi and Leigh after attending the Samsung Art & Design Institute in Seoul before launching his brand in 2013.

“I value honesty over anything else and quite simply want to show that I use good quality fabric,” he said, adding that he wants to add an unexpected twist to tailored pieces. The brand’s retail prices range from $300 for a shirt to $1,500 for a coat.

Until now, Han has been selling primarily in his home country, where his brand is gaining traction with the K-pop set. Boy band Exo, which has cult followings throughout Asia, purchased and wore Münn in their 2015 music video “Call Me Baby.” Members of the group have also been spotted wearing his clothing in their free time, such as at the airport. Han is starting to branch out to international markets, selling at stores including Studio Collection London and Maison Studio in Bari, Italy.

“I really look up to local designers that succeeded in bringing Korean approaches to Western traditions and have found demand for it in the West,” he added.