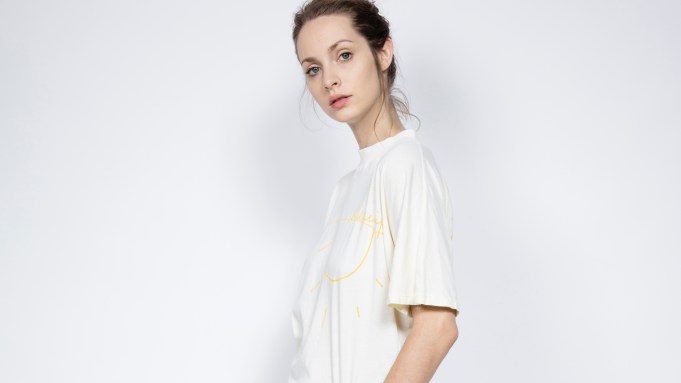 Designer: David Mayar Naman
Founded: 1997
Back story: Naman’s family left Libya and moved to Rome in 1968, and at 16 he began buying and selling fabric before he launched his own men’s wear line in 1997. Now, after almost two decades of doing business in countries including Germany, the U.K., Italy and China — Naman operates 60 stores in these nations — the brand is entering the U.S. with help from Jon McKinney, its president of North America whose résumé includes stints at Vince, John Varvatos and Rogue. It’s a family affair for Naman, whose sons and nephews work on the contemporary collection, which includes tailored clothing, sportswear, footwear, accessories and fragrance. His son Raffy Naman designs for another of their men’s brands, Paul Taylor, which has 12 stores in London and Italy. The line retails from $95 for a T-shirt to $895 for tailored items; pieces range from printed vacation shirts to bomber jackets and cropped jeans, aimed at better specialty and department stores. — ARIA HUGHES

Designer: Shanine Yngvason
Founded: 2015
Showing at: Pool
Backstory: Shanine Yngvason is blending a family tradition with a personal love: fashion and rock music. Born to an Icelandic father and Ecuadorean mother, who imported wool sweaters from Scandinavia and South America, the 33-year-old Seattle-ite made her debut as a leather designer at the Grammys about seven years ago. She cinched a strapless dress sewn from satin and feathers with a dark green leather cummerbund edged with black piping. She also designed gladiator-style shin guards out of crystal-specked black leather. Encouraged by compliments, she studied YouTube tutorials until she perfected the first collection that rang up more than $10,000 in sales on her e-commerce site this past spring. Now she’s ready to sell at wholesale her $30 leather bracelets, $100 belts, $115 leather cuffs and $575 handbags, many of which are accented with calf-hair skin, fringe, D-rings and solid brass buckles.

Using only real leather from Chicago-based Horween and other suppliers in California, Washington and Brazil, she said, “I want to make something that looks beautiful and stands the test of time.”  — KHANH T.L. TRAN

Designers: Katherine Theofilos and Alex Claster
Founded: 2012
Showing at: Capsule
Backstory: What started as an art project to mock the Ed Hardy-inspired tattoo fad has grown into a fashion line sold by directional boutiques like H. Lorenzo in Los Angeles, TNT in Toronto and Leform in Moscow. In their final year at The New School’s Parsons School of Design, Katherine Theofilos and Alex Claster decorated T-shirts with illustrations, cartoons and collages drawn by friends. Once they moved to Los Angeles in 2012, they adopted a comfy vibe via unisex cotton pieces with low inseams and baggy fits. They eventually added denim, tailored styles and looks designed for women. For spring, tinted in Nineties-inspired tropical pastels, they aim to grow the women’s side with a slipdress draped from Cupro, high-waisted jeans with raw cuffs, denim twill trousers with mother-of-pearl buttons and cotton-polyester tricot bodysuits. The line retails from $180 to $900. Said Theofilos, “We always do things at the pace we can handle. It’s now the women’s time to expand.” — KHANH T.L. TRAN

Designer: A collective is responsible for the designs, but Lois Tien serves as the face of the Hong Kong-based brand.
Founded: 2010
Showing at: Project Womens
Backstory: Started as the first and only women’s high-end brand in G2000 Group’s portfolio, Anagram caters to working women who crave a range of classic pieces for day and standout items for special occasions. It operates four stores in its hometown of Hong Kong and neighboring Macau, but it hopes its debut in Las Vegas will grant it a bigger stage for its sportswear and accessories, which retail from $250 to $1,100. To aid its global growth, it found inspiration from Turkish artist Memo Akten’s interactive installation titled “Body Paint.” The designers interpreted the rhythmic beauty of the color mixtures and fluidity of the brush strokes in sequined bomber jackets, silk shorts embellished with a ruffled panel and fit-and-flare dresses fashioned from silk and cotton twill printed in black, white and teal. “We stay on top of current trends,” said Lois Tien, Anagram’s brand manager, “but, understanding how fleeting a woman’s heart can be, we still keep an element of timelessness so the piece can be worn time and again.” — KHANH T.L. TRAN

Designer: Christophe Blondin-Pechabrier
Founded: 1968
Showing at: Project
Backstory: The French designer launched his brand with a women’s collection in 1962 and expanded into men’s and children’s six years later. He’s no longer active in the business, having sold the company to Miltenberg Otto Aulbach GmbH in 1998, but his namesake brand lives on. It’s carried in 2,500 points of sale globally and is relaunching men’s contemporary wear for spring under the auspices of licensee Shanghai Shenda America LLC.

The collection, which complements the existing tailored clothing, includes blazers, chinos, wovens, knits, sweaters, outerwear and signature logo Ts. Its aesthetic is European and its price points are accessible, said Sophia Birbilis, vice president of sales and merchandising. Wovens, knits and sport shirts open at $80 and leather jackets top out at $450.

“The tailored clothing has been a good business, but we need to have a full lifestyle brand,” said Bennett Fruchter, vice president of business development for Shanghai Shenda. The line aims to compete with Ben Sherman or Kenneth Cole New York. Pieces include a bird of paradise printed teddy jacket, selvage jeans, a chambray tunic, white chinos, a short trenchcoat with a microprint under the collar and a moto-inspired leather jacket. — JEAN E. PALMIERI

Designer: Ntim Abrokwa
Founded: 2014
Showing at: Agenda
Back story: Curtis Jones, general manager, and Abrokwa have an intimate knowledge of their market. The Yonkers, N.Y., natives launched their streetwear line We Are Alumnus in 2014 with a monobrand boutique in their home town. The line is based on a prestigious, fictitious university.

Before introducing the mostly American-made line, Abrokwa spent 15 years as a barber who also sold clothes out of his barbershop. “He’s really rooted in Yonkers culture and has a close relationship with the consumer,” Jones said. Now they are ready to grow across the country and have new manufacturing partnerships to help rev up wholesale distribution. The line is known for bright, graphic T-shirts, hats and terry sets that match popular sneakers. “We have a uniform approach to styling that some say isn’t viable anymore, but we look at it as our identity and we are going to stick to it,” said Jones, who previously worked in production management for a consumer goods company. So far, the collection, which retails from $32 to $75, has resonated with rappers including P. Diddy, Jadakiss and producer Swizz Beatz. — ARIA HUGHES