The designer originally wanted to be an architect, and his affinity for three-dimensional structures is apparent in his debut collection for fall. 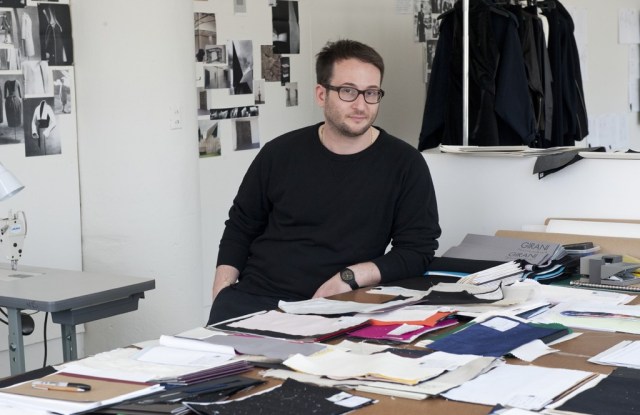 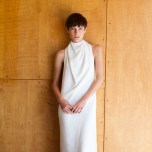 Zaid Affas originally wanted to be an architect like his father, and his affinity for three-dimensional structures is apparent in his debut collection for fall.

Born in Kuwait to Iraqi parents and raised in London, Affas enrolled in Central Saint Martins as a fine arts major, where he began to collaborate with fellow students on fashion projects and eventually changed his major to men’s fashion design.

Upon graduating in 1998, he got a job at Ralph Lauren’s creative services department in London doing store interiors and window design, then moved to New York and began designing outerwear at BCBG. The job eventually extended to the brand’s runway collection, which brought him to Los Angeles eight years ago, after which he started his own consulting company, acting as design director for Ports 1961 among others.

A year ago, Affas, 37, started his own label (also under his consulting business umbrella, a private company with silent investors). He presented his first collection in a gallery during Paris Fashion Week in February. “I didn’t want to use any colors, print or novelty embellishment because I wanted it to be more about the form itself and the materials,” said Affas, who worked in black and white wool, wool-and-silk and wool-and-nylon blends for suits and dresses; mohair and cashmere for coats, and silk-lined Japanese triacetate for dresses. “I like juxtaposing the natural and the man-made; nature and architecture,” he said, adding that certain fabrics and shapes meant to recall rock formations, lava and coal, or building materials such as glass and steel.

Some retailers who saw looks from the 43-piece collection noted the meticulous tailoring of the suits and the sculptural forms of the outerwear, which Affas showed over minimal, drapy columns, tops and pants. One oversize coat features a double zipper that runs horizontally across the back, enabling it to be worn zipped up for a cocoonlike effect, or unzipped and longer. “Everything is made to perfection — the volume, the choice of fabrics, the detail of a pleat or a cut. Nowadays it is of real value to show how essential tailoring and construction are to a wardrobe,” said Nathalie Blanchet, buyer for Paris-based L’Eclaireur. “From this point of view, I understand the prices.” Susan Stone, owner of Santa Monica-based Savannah, had more of an eye toward the practical. “The talent is there and so is the training, but he may need to commercialize it a little more. It’s a nasty word, commercial, but things do have to sell.”

Coats and dresses wholesale between $1,265 and $1,850; dresses between $995 and $2,000; suiting jackets from $885 to $1,120, and tops and pants from $330 to $765. Everything is made in Los Angeles. “It’s a very luxury price point because of the fabrics and the hand finishing, so I think stores want to see consistency in the next season,” Affas said. So far, he has sold the line to private customers and connected with celebrity stylists such as Tanya Gill, who requested an ivory suit for a client headed to the Cannes Film Festival.

Moving forward, Affas said he plans to stick to the sculptural theme while exploring more conceptual yet easy-to-wear looks. For spring (as of now, he does not do pre-seasons), he will work in white and black treated cottons and linens. “I like the idea of slick and traditional, and I want my clothes to be different yet wearable,” Affas said. “To be really stylish and chic, a woman doesn’t need to shock people. It’s more about having a confident personality.”