It was her quest for the perfect T-shirt that led her to launch her own line for spring. 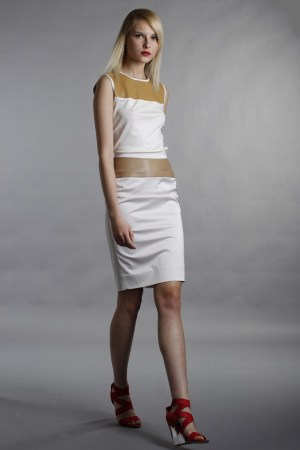 After working as a photo editor, a stint designing for Carlos Miele, and years spent as a fixture in the New York society pages, Alex Kramer is familiar with fashion from all angles. But it was her quest for the perfect T-shirt that led her to launch her own line for spring. “The idea is to make smart, very wearable clothes that are comfortable but also sophisticated, not overly fancy in any way,” said Kramer. “You want to see that, go to Valentino.”

The collection, which has been picked up by Barneys New York for spring, follows clean, sporty lines with tanks, dresses and even versions of a jogging suit done in thick silk rib-knit jersey, Italian ponte and cotton sateen twills. For an understated, edgy effect, there are mesh knit and leather accents at the neck of a T-shirt or the top of skinny black pants.

Pieces will retail from $250 to $1,100, and everything is produced in New York. Kramer co-designs with Brian Stanziale, who she met while shopping at his now-closed SoHo store, Sloane, where he designed and sold reworked vintage pieces.