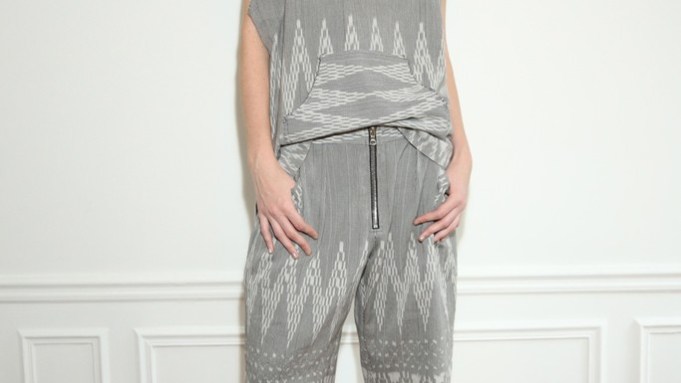 What sells? Many designers prefer to ignore the question, lest it prove anathema to their sacred creative process, yet it was the first thing Scott Studenberg and John Targon asked when launching their new collection, Baja East.

The duo is familiar with the art of the sale, having worked for three of the most influential and successful brands in fashion today, actually selling the clothes. Studenberg was Lanvin’s national sales director of North and South America for about five-and-a-half years, while Targon recently left Burberry, where he was director of wholesale for men’s wear and men’s accessories. Prior to that he spent four years as sales director of North America at Céline.

“It’s what you can actually wear and what has a purpose,” said Targon of Baja East’s look, which is tailored to his and Studenberg’s work experience and lifestyles — they’re two 30-year-old fashion guys who are based in New York but travel constantly. The collection blends a laid-back, beachy vibe with urban cool, and true to its name, the label is centered around a modern, luxurious interpretation of the classic Mexican baja.

“Besides the fact that we wanted to make cool clothes, it’s what we wanted to wear,” said Studenberg, who was dressed in a suede baja, matching shorts and a snakeskin hat from the first collection, which is unisex. “We hate calling it unisex, but we don’t know what else to say besides blurring the lines between men and women.” Another tag line they’re using is “loose luxury,” everything done with a relaxed fit — a men’s large is a women’s medium — and ultrasoft fabrics. Bajas come in cotton ikat jacquard. Some are reversible, some are made from vintage sarongs from Bali; there’s also sumptuous graffiti jacquard Cariaggi cashmere sweaters, leather track pants and croc-printed swimwear with zipper pockets and perforated linings so nothing balloons once in the water. Everything is produced in New York. The line skews toward women, but “we know there will be some guys that will wear that at, like, Maxfield,” said Studenberg, pointing out a maxidress version of a baja.

Working at the high-end level has shaped Studenberg and Targon’s strategy, not only in their relationships with retailers, but pricing too. Baja East is positioned at the opening designer price point, ranging from $238 to $1,200 wholesale. “That’s where the biggest opportunity is,” said Targon. “Personally, that’s how we dress. We’ve been able to buy Céline and Lanvin with a discount, but we’re always there buying other brands where they start. You might not always be able to buy the cashmere overcoat but we wanted to make sure we had something that was the [designer] touch point.”

They plan to start slowly, preferring to sell to specialty stores — Maxfield in Los Angeles, Kirna Zabête in New York and A’Maree’s in Newport Beach, Calif., have picked up the line. “A lot of labels enter a department store and they’re lost on the floor and they don’t sell and you can tell what bombed,” said Targon. “The customer goes into the store multiple times a week, so that perception of your brand sitting there, sitting there can be really detrimental.”

Another lesson learned from sales is to always ask: “‘Where is she going?’ I did that at Lanvin too,” said Studenberg, imagining one of his friends, a stylist, wearing the ikat baja and flat over-the-knee boots to work. “She’s going to a photo shoot. She’s throwing this on because she doesn’t have to think about it and she looks cool and she can eat all she wants. It’s an all-you-can-eat piece as well — loose luxury.”