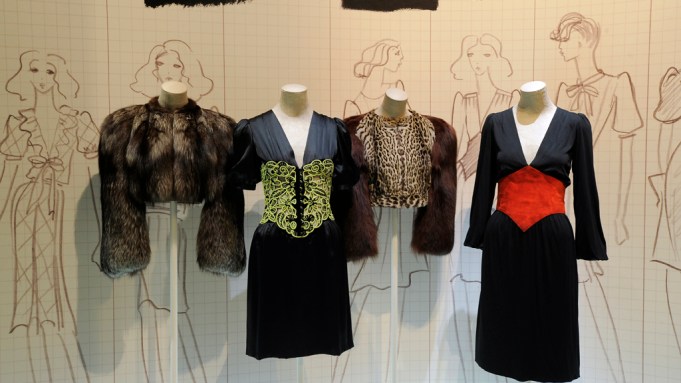 PARIS — A new exhibition at the Fondation Pierre Bergé-Yves Saint Laurent shines the spotlight on the late couturier’s infamous 1971 collection, which was inspired by the Forties.

Curated by Olivier Saillard, director of the fashion museum at Palais Galliera, the show features 40 outfits from Saint Laurent’s spring couture line, which caused a scandal because of its perceived vulgarity and its references to a dark chapter of history, the Nazi Occupation of Paris during World War II.

“We conducted a forensic inquiry into this show and we are displaying everything we found,” Saillard told WWD. “I don’t think there has ever been an exhibition before that was entirely devoted to a single collection.”

Known as “The Forties” or the “Liberation” collection, it featured 80 styles in total, which were shown to clients and editors at Saint Laurent’s former headquarters on rue Spontini in Paris. With little in the way of production — six models and no soundtrack — the focus was squarely on the clothes, and editors were outraged.

Saillard said the collection might have been acceptable had it been shown as part of Saint Laurent’s Rive Gauche ready-to-wear collection, but in the conservative milieu of couture, it came across as a slap in the face.

“Haute couture was a somewhat conventional, very bourgeois industry at the time, with customers who had lived through the war, and young or not-so-young journalists who had either lived through the occupation or felt its repercussions through their parents,” he recalled.

“To suddenly see on the catwalk a collection inspired by the slightly outré elegance of the Forties was perceived as a form of irreverence toward those who lived through this period of restriction,” Saillard added.

The set design by Nathalie Crinière incorporates curved panels emblazoned with reproductions of Saint Laurent’s collection notebook consisting of sketches and fabric swatches — a tome referred to internally as the “bible” — in order to give visitors the feeling they are stepping into his creative process.

The catalogue of the exhibition includes an interview with Paloma Picasso, who inspired the collection with her colorful outfits culled from flea-market finds.

“When Saint Laurent saw her, he was very impressed by this expression of youth,” said the curator. “Until Saint Laurent, Forties fashion was considered outrageous and not very elegant, as it was put together with scraps, with dresses made of old curtains and men’s jackets cut into tailored suits.”

The designer was forced to respond to the virulent criticism triggered by the show by clarifying that he wasn’t nostalgic for the historic era, but merely paying homage to the freedom of the women who lived through it.

“I prefer to shock rather than to bore through repetition,” he told French Elle. “I think that, after a period of wanting to melt into the crowd and craving the anonymity of a uniform, people today want to stand out and put on a performance like a star.”

Comparing couture to an “old lady,” Saint Laurent was perplexed by the rejection of his new aesthetic.

“He had trouble understanding why those who took him to task for making women androgynous in the Sixties were now protesting the fact that he gave them a very sexual aspect,” said Saillard. “Women in Paris, in particular, came up with looks as a form of response to the occupation. It was a fairly unique phenomenon in fashion.”

Saillard said the collection not only signaled the start of Saint Laurent’s mature phase — characterized by unexpected color combinations, a subversive vision of the bourgeoisie and occasional nudity — but had far wider implications.

“For me, this collection marks the beginning of contemporary fashion history,” he said, noting that Saint Laurent was the first to capture the street style that would mark the rest of the decade.