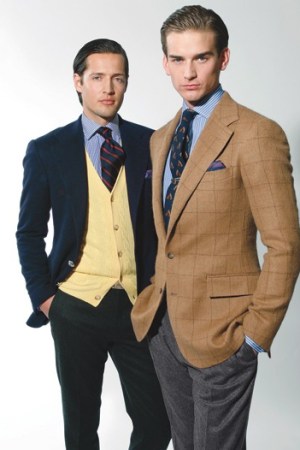 Established men’s wear designers are going back to their roots this season, and no one knows his brand heritage better than Ralph Lauren. The diversity of his men’s collections, presented this week, allows for emphasis on tradition and simultaneous courting of new customers with more modern fare.

This story first appeared in the February 5, 2009 issue of WWD. Subscribe Today.

Creatively, the company remains focused on its subbrand culture even as Polo — just like every other fashion and luxury brand — battles the challenges of the recession. The difficulties were crystallized Wednesday when Polo reported a decline in quarterly income and cut its full-year profit outlook. (See full story, page 7.)

Yet Ralph Lauren’s vision has always remained consistent. And for fall, that means:

• The return of the three-piece suit;

• Monochromatic looks across furnishings and tailoring;

• A sharper silhouette, with a new rolled shoulder.

Purple Label, which began with made-to-measure tailoring, now represents the  most traditional luxury that Ralph Lauren has to offer, whether in tailored clothing or sportswear. It is deliberately worldly, to contest the perception that Ralph Lauren merely stands for prep or Americana.

“Purple Label is classically the most sophisticated. It has an international quality. This could be Italian, it could be French,” said Ralph Lauren.

“These are things you think you see in a lot of places because they’re timeless and classy, but you really don’t,” the designer noted.

The modern sleekness of Black Label, on the other hand, alludes to spy planes and Italian race cars. The tailored component is minimal and slim, and styled in monochromatic charcoal ensembles.

“I love the ability to go from Purple Label, which has heritage, to Black Label, which feels like another brand,” said Lauren.

Polo sportswear was displayed in vignettes, including a tweedy hunting party and a Thirties football rivalry.

And hidden behind a curtain, but meticulously arranged, was a display of RRL, the purely vintage-inspired line that is not wholesaled. Lauren said RRL enjoyed a serious following in Japan, where there is a resale market among collectors. Special edition RRL jeans sell for $1,350 only in Ralph Lauren’s Omotesando store in Tokyo. “It’s a cult thing,” said Lauren.