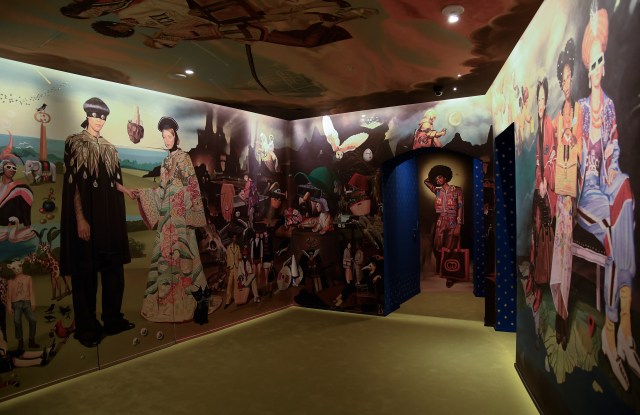 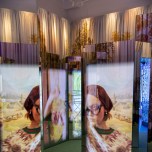 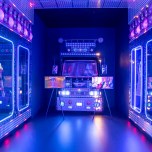 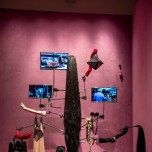 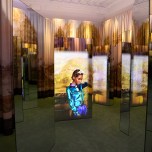 FLORENCE — Anyone expecting yet another fashion retrospective at the Gucci Garden in the year of the brand’s centenary is in for a surprise.

The exhibition venue has been completely transformed to reproduce 15 of the most innovative and groundbreaking communication campaigns by creative director Alessandro Michele.

Case in point, the theme of Gucci’s fall 2018 campaign — obsessive collectors — was translated into a room filled from floor to ceiling with shelves stacked with 1,400 cased butterflies, 110 colorful wigs, 420 Gucci sneakers and 182 cuckoo clocks across the height of one wall. Referencing the cruise 2019 campaign, images of a community of ark-builders — and any animal you can think of — ran across several screens in another room filled with hay — its strong scent transporting guests outside the locale.

“It was fun to try to reproduce these very complicated sets, and I now feel I am in a place that has been cleared of the past, which was wonderful, but we didn’t fit it in anymore and we didn’t want to be pigeonholed,” said Michele, sitting at a desk next to president and chief executive officer Marco Bizzarri.

The mood on Thursday was upbeat, marking one of the first IRL events here, while social distancing and masks were strictly enforced for the protection of a restricted number of about a dozen journalists. Michele, wearing an emerald green jacket over jeans, and Bizzarri in a checkered suit, were clearly pleased with the transformation of the Gucci Garden. (Incidentally, asked by one journalist what fashion item he wished he had invented, after blue jeans, already famously taken by Yves Saint Laurent, Michele said the jacket — and more specifically men’s suits, which “gave a voice to men and women, revolutionizing the world.”)

Gucci Garden, located in the medieval Palazzo della Mercanzia in Florence dating back to 1337, a few steps away from the Uffizi Gallery on Piazza della Signoria, was inaugurated in 2018, when Michele overhauled the label’s museum that had opened in 2011 under his predecessor Frida Giannini, to make it more in sync with his own aesthetics. Over the years the venue has staged several exhibitions, illustrating the evolution of the designer’s narrative in relation to the brand’s archives or dedicated to the exploration of masculinity.

“I liked the idea of the garden because it’s nature manipulated by man to grow in the place where the family sowed the seeds of the brand, and to have a container where we can make things happen,” explained Michele. “If we manage to even simply intrigue someone [with Gucci Garden], then we’ll have won. I wanted to avoid offering something deadly boring — 100 years may be a beautiful rounded date, but I see this as the first year of the future.

“I redesigned the spaces because I felt it was necessary,” continued Michele, giving a shoutout to Bizzarri for once again supporting his need for change. In turn, the executive said he was pleasantly surprised by the new Gucci Garden.

“And luckily I continue to be surprised. The last 12 months have been even more intense than our beginning at Gucci together,” he said, referring to the changes in the collections set in motion by the designer in 2020, with two shows a year according to Michele’s own creative pace, which also impacted the supply chain, for example.

“I like to be challenged, to feel a bit uncomfortable,” chimed in Michele with a smile.

Speaking of the exhibition, the designer said he “created a playground of emotions that are the same as in the campaigns, because they are the most explicit journey into my imagery.” Michele personally curated the exhibition, called “Garden Archetypes,” with Archivio Personale, the studio that designed the interiors.

“An archetype is the original form from which all copies are made, never able to be re-created in itself, and every Gucci campaign speaks of a unique and unrepeatable moment — expressing the spirit of each collection,” continued the designer.

To set this exhibition in Florence, “where everything started,” and referencing his first six years at the company, “our apparent and bold craziness,” was especially poignant, he admitted. His goal, however, was to create “a playful and light narration of images and references and memories of the years and what our subconscious produced. These are images that belong to us and that echoed in our mind.”

Asked how he chose the campaigns, Michele said the decisions were made instinctively and naturally, based on the “incredible experience” each had afforded at the time. “As in analysis, we dug deep in our subconscious.”

It was key for Michele to avoid any form of nostalgia, aiming for “vitality” grounded in the present.

He admitted “it was like putting [Jules] Verne in five rooms, it’s not easy to move from the beaches of L.A. to Berlin and the story of ‘Star Trek’.”

Michele’s disruption is clear right from the entrance of the exhibit, as colorful graffiti decorate the walls of the antique staircase in a reference to Gucci’s pre-fall advertising 2018 campaign photographed by Glen Luchford depicting Gucci-clad rebels occupying a university campus, challenging the establishment and asking for change, inspired by the bold French Nouvelle Vague imagery of the late ’50s and ’60s and the French 1968 student protests. The graffiti reproduce slogans in French that translate as “We are all united” or “Freedom, equality and sexuality,” among many others.

In another room, 150,000 sparkling sequins blanket the walls in a dazzling reinterpretation of the fall 2016 campaign in a trip through Tokyo, also photographed by Luchford, like several others exhibited. Elsewhere, a museum-style diorama serves as the frame to the creatures and aliens of the fall 2017 campaign’s trip to outer space. The painstaking details on the small figurines, from the necklaces to the Gucci shoes, are a testament to the artisans Michele worked with for the exhibition.

In one room, a circular projection created the immersive sensation of being on the floor with the all-Black dancers of the pre-fall 2017 campaign, which paid “homage to the elegance of Black culture,” responding to “the need for a better representation of the Black community in the fashion industry,” said Michele.

He expressed surprise — and some fatigue — at being identified with kicking off gender fluidity trends. “It’s just who I am and I did not invent gender fluidity. I’m happy that it’s been embraced but I don’t do politics. And all those ‘freaks,’ I want them naturally established and no longer underground. I’m now thinking of Grace Kelly films,” he added vaguely, laughing.

The exhibition will stay in place indefinitely at Gucci Garden while it is also set to travel to Asia, from Shanghai and Hong Kong to Taipei, Tokyo, Sydney, Bangkok and Seoul.

A virtual tour will be available online, and Gucci has also partnered again with the global online platform Roblox bringing into its metaverse a Gucci Garden shared experience that will open its doors on Monday for two weeks. Digital avatars will transform into mannequins absorbing elements of the exhibition, turning themselves into unique digital artworks.

“It is important to have spaces that are not usual to fuel creativity, which trickles down to the rest,” observed Bizzarri. “This overlapping of sectors can also eventually turn into business. It would have been stupid for us not to enter gaming,” he added, embracing an element of culture that is changing.