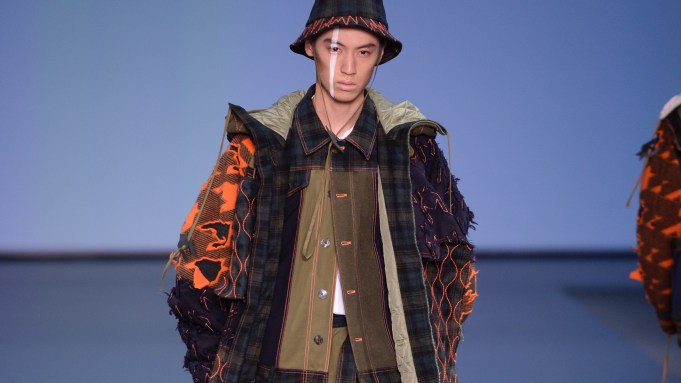 Centrestage, which ran Sept. 7 to 10 at the Hong Kong Convention and Exhibition Centre, is a spin-off of the larger trade fair Hong Kong Fashion Week. The government-backed Hong Kong Trade and Development Council stages both events and is pushing Centrestage as the smaller, more selective and more fashion-forward version of the two. It appears to be an event that is still finding its place in the Asian fashion landscape. While the local fashion set filled the seats at several runway shows, foot traffic at the small trade show appeared light. That said, official attendance figures sound impressive; organizers said the event drew some 8,300 buyers.

Hong Kong-based designer Lulu Cheung, a longtime Hong Kong Fashion Week participant, showed her spring collection at one of Centrestage’s many group runway events. She said Centrestage, which staged bigger and better-produced shows than past editions of Hong Kong Fashion Week, was as a step in the right direction, but the event still needs tweaking. It should be more selective about picking better brands and strive to be more like Tranoi in Paris, she concluded.

“I think the idea is good but we need to make it more sharp,” she said.

Centrestage actually overlapped with the start of New York Fashion Week — a fact worth noting if comparisons to Tranoi will ever be drawn. The scheduling conflict is not necessarily significant as Centrestage targets a mainly local and Asian audience. Nonetheless it is the latest example of how Asian fashion weeks and events seem to proceed on their own trajectory, oblivious or indifferent to the rest of the international fashion calendar.

Ian Kim, part of the sales planning team at Seoul-based fashion brand Beyond Closet, said he was impressed with the quality of the Centrestage runway shows and venue — a large hall at the convention center — but he was underwhelmed by the trade fair. The quirky streetwear brand, designed by Ko Taeyong, came to Centrestage as a guest of the organizers with free travel and accommodation. He said he’s not sure the company will return next time if it has to pay its own way.

“It’s a small place…no big buyers. So I’m a little bit disappointed. But it is only the first time. So I expect it will better [in the future],” Kim said.

Keith Aw and Carls Lim, who run a start-up handbag brand in Malaysia called Dots & Dash, said Centrestage was a fruitful experience for them. They were looking to make manufacturing contacts with the companies behind the brands being presented at the fair and glean broader insights on fashion trends. Lim, the brand’s art director, noted a lot of earth tones, minimalist designs and voluminous shapes at the fair. He said a lot of what he saw could work well for Asian markets.

“I think [the design] is up to standard,” he said.

• Mim Mak’s packing tape-inspired line up of dresses and jackets.

The event also featured a series of seminars and roundtable discussions, including one on how the emergence of digital technologies is affecting sustainability in fashion.

Josie Tam, cofounder and chief solution officer at Techpacker.com, spoke about how her company’s platform can help designers minimize textile waste and reduce their production costs by communicating more directly with factories from the very start of the design process.

Jia Jih Chai, vice president of international at mobile classifieds app Carousell, and Christian Dean, founder and chief executive officer of sustainable fashion advocacy organization Redress, spoke of a shift in the mindset of Asian consumers in regards to second-hand clothing. Traditionally, some Asian people take a dim view of used clothing and hold superstitious beliefs about it.

“People will buy second-hand clothes if [they are] good quality and [sold at] a good price,” Dean said.

Centrestage capped its inaugural run with the Hong Kong Young Designers’ Contest. Kenneth Cheung won the competition with his edgy, embroidered takes on outdoorsy outerwear for men. He won a cash prize of 35,000 Hong Kong dollars, or $4,511, and an internship at Tokyo-based fashion brand Facetasm. Facetasm designer Hiromichi Ochiai served as the VIP judge of the competition.