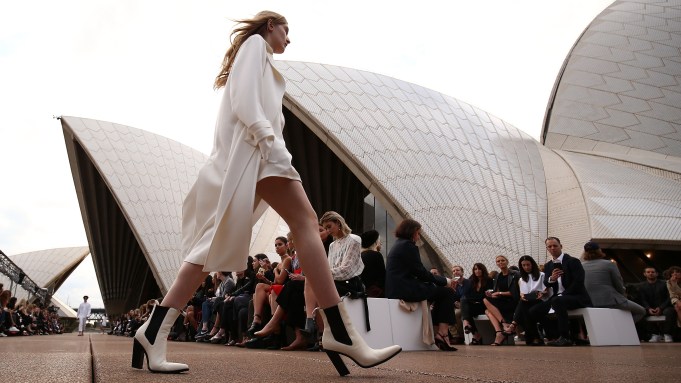 Now in its 22nd year, the annual event pushed dates back several weeks to rebrand itself from a spring to resort showcase last year, resulting in a 75 percent increase in international buyer attendance over 2015, according to organizer IMG.

The company said it expects this year’s eight-day event, which concluded Sunday with a weekend of ticketed consumer presentations of the week’s highlights, to have drawn a cumulative attendance of 30,000.

Among them were a contingent of 33 international delegates, including 23 buyers — a number on par with 2016 — from New York, London, Paris, Singapore, Hong Kong, Tokyo and Dubai. Airfares and accommodation were covered by the event.

More than 80 brands from Australia, New Zealand and China were showcased in 42 solo and group runway shows and a new IMG-operated “Designer Suites” showroom located at the event’s central hub for five years, Redfern’s Carriageworks.

Buyers praised the number of collections on offer, the event’s friendly vibe, good organization and the picturesque off-site locations that anchored the event in Sydney.

“Incredible — it just gives you an idea of the culture here and you can see the brands in their element and can get a real idea of the DNA of each brand,” said Harvey Nichols junior buyer Rachel Cooper of the Sydney Opera House backdrop to Dion Lee’s outdoor opening show directly underneath the UNESCO World Heritage-listed building’s famous white sails.

Like others, Cooper singled out Double Rainbouu as one of the week’s top picks — the year-old unisex surfwear brand from former Ksubi creative and art directors Mikey Nolan and Toby Jones. The brand received an unexpected social media jolt a few days before its show after images of Justin Bieber and a friend astride a camel in Dubai, both wearing Double Rainbouu’s signature acid bright Hawaiian shirts, went viral. For resort 2018, the duo launched women’s swimwear in three prints — a short women’s beach kimono, unisex merino jacquard knits, bags, hats and shearling slides in bright colors.

Cooper flagged the week’s two dominant trends of romance — via romantic frills and feminine ruffles in collections such as Macgraw, Alice McCall, Sass & Bide and Romance Was Born — counterpointed against a plethora of deconstructed, oversized shirting at brands such as Christopher Esber, Michael Lo Sordo, Anna Quan, Strateas.Carlucci and China’s VMajor.

“Shirts are massive for us at the moment, so I hope that trend continues — also, [I liked Sydney’s] bold colors,” said Cooper.

“I also loved [ath-leisure brand] PE Nation and am hoping to pick that up as well,” she added. “Obviously [with] activewear, everyone’s wearing it from day to night. And Alice McCall for our sort of ‘magpie’ customer — they love glitz and a bit of Lurex and frills. I thought that would be good, especially while Self-Portrait are having such a moment, it sort of sits with that and the price points are amazing. I also loved Ginger & Smart. The layering was incredible, the styling and colors were beautiful, really poppy.”

In 2016, Lane Crawford picked up eight Australian brands for resort and hopes to build on those relationships and pick up new names this year, said the company’s director of fashion Kelly Wong, whose top picks were Albus Lumen, Dion Lee, Anna Quan, Double Rainbouu and Michael Lo Sordo.

“As of 2016, [Australia Fashion Week] was more aligned with the international fashion calendar, this allows us to get a head start on buying resort before we travel to other international markets,” said Wong, who liked the week’s sheer fabrics, primary colors and notably all the deconstructed shirting, which she said is doing particularly well at Lane Crawford, along with unisex brands, oversized T-shirts and sweatshirts.

“It [Double Rainbouu] is that sort of relaxed, beach, happy vibe that’s filtered into all the collections,” said Power. “And the fact that I got to the Opera House and then Bondi Icebergs [a restaurant overlooking Bondi Beach — the show backdrop for unisex luxury basics line Ten Pieces], that’s crazy.”

Matchesfashion.com carries 11 Australian brands and regularly does exclusive capsule collaborations with brands such as Zimmermann, Ellery and yoga line The Upside. Power said the site sold more than 400 pairs of the latter’s camouflage print leggings as soon as the product launched on the “Just In” news section, which she described as Matchesfashion.com’s most powerful marketing tool, alongside its weekly “Style Report.”

Already stocking more than 40 Australian brands, Shopbop is hoping to pick up several names spotted in Sydney, according to the e-tailer’s apparel, swim and lingerie buyer Jenny Fuchs.

Fuchs said Australian Fashion Week is “a great mix of contemporary, designer, swim and active, so you really get a 360 view of the market and how different trends are emerging in each category.”

She added: “I really like the juxtaposition of two trends that we are seeing in particular: the girly-girl look — think ruffles, pink, gingham, florals — versus the streetwear-inspired/borrowed from the boys aesthetic. I think each is valid and I’m even more so looking forward to sharing this with our fashion team and finding ways to style them together.”

Karen Brewster, group general manager apparel at Australia’s Myer department store chain, said although she would like to see more big names on the MBFWA schedule — the Myer-owned Sass & Bide was one of a handful of the better-known Australian labels to show this year — she believes emerging designers inject much-needed energy into the event.

Brewster said she is looking at several new names that showed and has already signed three-year-old label We Are Kindred.

Said Brewster, “They [We Are Kindred] understand the Australian lifestyle really well — so, really feminine, print-driven and the fabric weights are in line with what we’re going to sell in Australia in our stores.”