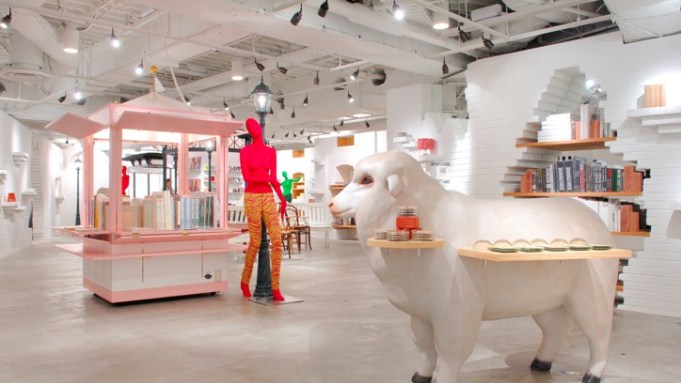 TOKYO — Japan may be inching its way out of a recession but specialty retailers and fashion brands are still forging ahead with their retail expansion.

A large retail and entertainment complex called Marunouchi Brick Square also will open in the city center to house tenants like Land of Tomorrow, Cath Kidson and Brooks Brothers.

Although most observers agree Japan’s future growth prospects are limited as its aging population shrinks and it emerges from a long period of macroeconomic stagnation, it’s clear the country remains a critical market for luxury goods, worth something close to $20 billion. Plus this is an advantageous time to expand here as real estate prices and rental rates linger in the doldrums.

“In some of the cases I suspect there is enough ‘risk-sharing’ with local partners,” said Brian Salsberg, the head of McKinsey Japan’s consumer and retail team.

That said, it remains to be seen just how many of the new stores will outlive their initial burst of novelty and be successful in the longer run, as Takahiro Yamamura, a business professor at Bunka Fashion Graduate University, questions.

“Japanese consumers love new products, new things, anything new. That makes these types of specialty stores very popular at the beginning but nobody knows if it will last,” Yamamura said. “Japanese consumers are also quite fickle.”

All of these brands are entering an increasingly cutthroat atmosphere in what was already one of the most competitive retail landscapes in the world. This most recent burst of activity coincides with the boom of fast fashion here. Brands like Uniqlo, Hennes & Mauritz, Forever 21 and Zara have convinced Japanese shoppers they no longer have to shell out luxury-level prices to look fashionable.

Here, a look at some of the latest additions to Tokyo’s retail scene:

The celebrated bicoastal specialty retailer has just opened a sprawling flagship, its first outside the United States.

The store, which opened Sunday, boasts a mix of quirky furnishings, from a teepee constructed of Pendleton fabric to an ottoman in the form of a giant slice of pizza and display cases supported by statues of sheep, turtles and every other imaginable critter.

“We have a sense of humor with what we do,” said Humberto Leon, who founded Opening Ceremony in 2002 with partner Carol Lim. The pair hosted a star-studded megaparty Saturday to fete the new store.

It is also home to Alexander Wang’s first shop-in-shop in Japan as well as dedicated spaces for Mary-Kate and Ashley Olsen’s line The Row and Chloë Sevigny’s exclusive unisex collection for the retailer. A selection of gift items such as John Derian dishes and vintage albums on vinyl round the mix.

Lim stressed that the Tokyo location, like the pair’s stores in New York and Los Angeles, seeks to tell each brand’s complete story by merchandising a wide range of each designer’s work.

“Some [of the brands we carry] have already sold in Japan before but the way we’re presenting it has never been done before,” she said. “We have personal relationships with everyone so…you actually see the breadth of all these designers.”

Each floor, which combines both men’s and women’s items, is designed around a theme. One level emulates a suburban American home, featuring a bed cut lengthwise to expose its springs and chunks of a miniature house turned into display areas and dressing rooms.

“We wanted it to feel as if literally someone just came in with a chain saw and just sliced these homes apart and brought them intact to Japan,” Leon explained.

Leon said a restaurant called “Potluck at Opening Ceremony” will open in the basement of the building come October. It will feature a rotating crop of guest curators, an ever-changing menu and a coffee stand run by Blue Bottle Coffee Co. of San Francisco.

“Carol and I, aside from shopping, we love, love eating,” he said.

Tokyo got a dose of California cool when Ron Herman opened the doors of its first international store here on Saturday through a partnership with retail group Sazaby League.

The 3,000-square-foot boutique, located in the residential district of Sendagaya, has a distinctly beachy feel, featuring walnut floors, blond wood displays and surfboard accents. Like its counterparts in Melrose and Malibu, the store stocks a varied mix of items, from Martin Margiela ankle boots and Stella McCartney jackets to studded Converse high-tops and distressed hoodies from V::room.

“I hope that they want a little bit of California,” said Herman himself, taking in a packed opening party at the store Friday night. “It’s got a good vibe, doesn’t it?”

The store also features a unique range of Ron Herman vintage pieces, which have been reproduced especially for the Tokyo store, as well as T-shirts imported from California.

But Herman seems most impressed with a selection of special Mastermind Japan collaboration items occupying a corner of the store, including black Dickies pants and a $15,000 Rolex model. The store sold out of the timepieces before it even opened to the public. Herman said a female shopper from Hong Kong flew to Tokyo to nab the last one.

“It’s one of the most brilliant things I think I’ve ever seen,” he said of the Mastermind products.

“The in-situ molded concrete work is a result of a great deal of experimenting to get the right ‘Le Corbusier’ texture,” Owens stated. “This is the technique we’ve perfected to use in my furniture collection.”

The store carries the designer’s full line of ultrasoft jerseys, distressed leather jackets and other signature items. A selection of Owens’ favorite books, DVDs, CDs and a collection of furs from Jardin du Palais Royal round out the mix. His furniture collection will also be on sale here eventually.

Owens will lend an offbeat, personal touch to the store in the near future with a wax figure of himself morphing into a demon monster. The designer said this accent piece is a nod to the Japanese traditions of Kabuki plays and Godzilla movies.

Owens, who might travel to Tokyo in October, is planning to open his fifth store in Seoul before the end of the year.

The designer’s second shop-in-shop in Asia opened its doors in Tokyo last week on the prestige tailoring floor of Isetan’s men’s wear building in Shinjuku.

The store, designed by Ford’s longtime collaborator William Sofield, features a palette of textured gray and accents in Macassar ebony, suede and polished chrome. It sells the full range of Tom Ford products including the full men’s wear line, a made-to-measure service, fragrances and eyewear.

Last year, Ford opened his first shop-in-shop in Asia in Osaka’s Hankyu department store. In September, the designer will open his third store in the region in Seoul’s Galleria department store.

The iconic Japanese brand has just rolled out a new retail concept called 24 Issey Miyake that specializes in affordable, easy-to-wear pieces like colorful crushed T-shirts from the me Issey Miyake line, unique cut-and-sewn knits and the brand’s trademark pleated items. Prices are significantly more affordable than those elsewhere in the Miyake stable, ranging from 10,000 yen, or about $108, for a T-shirt to 30,000 yen, or $323, for a coat.

In early September, Issey Miyake will roll out the new 24 format to corners in Takashimaya as well as Elttob Tep, its own multibrand concept store in Osaka. There are no current plans to export it to other markets, a spokeswoman said.