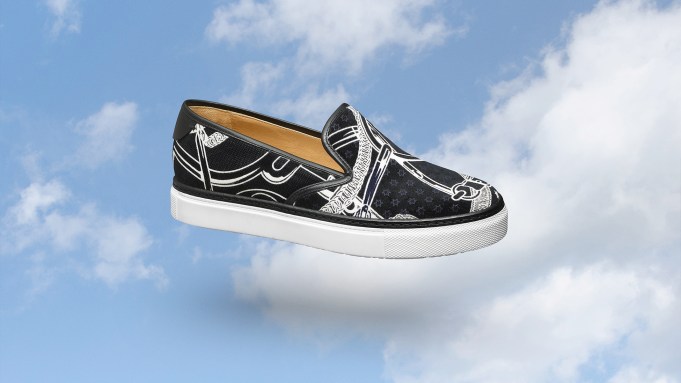 NEW YORK — With Carlos Slim Domit, Kering and Ashton Kutcher among its investors, Fancy has a new tie to the world of luxury — a limited collaboration with Hermès.

The SoHo-based shopping app clued in some of its 10 million-plus global shoppers to three customized Hermès finds — the Kick, $780 men’s slip-on sport shoes with an Hermès print; the Nautilus, a $1,670 caplets pen, and Le Flaneur d’Hermès, an $11,900 carbon bicycle with leather accents. The Hermès for Fancy selection is meant to relay Hermès’ “timeless, yet contemporary aesthetic and Fancy’s dedication to offering premium, unique products from around the world,” according to an Hermès-approved post on Fancy’s blog.

“Fancy is a great way for Hermès to test a presence on a social e-commerce platform,” said Caroline Watchorn, Hermès’ digital development director.

To tout the trio of products, Fancy developed a parallax animation video that allows shoppers to control the direction of the bicycle. “We set out to create a fun and engaging experience around these products,” said Joseph Einhorn, Fancy’s chief executive officer. “We are grateful to Hermès for their willingness to try something new with us.”

One of Fancy’s other potentially sizable initiatives will be the opening of a 20,000-square-foot pop-up store for ready-to-wear, one-of-a-kind gadgets, home décor and other items. Jennifer Fisher jewelry, Blaken watches, Greats shoes and Illesteva eyewear will be among the labels offered in “the Fancy Run-up” that will bow at 470 Broome Street Dec. 2 to 6. Along with the abundance of merchandise and interactive digital features, the four-floor temporary space will host panels, and breakfasts, lunches and dinners for a social component. The pre-holiday run will be a testing ground for Fancy, which is exploring the possibility of having a store of sorts. “This is the first step into figuring out a way to execute experimentally what we’re doing online,” Einhorn said. “I’ll know more when it’s over.”

Fancy is also bulking up its one-of-a-kind offerings and experiences called “The Ones.” In recent seasons, the company has sold such right-off-the-runway looks as only one Alexander Wang white leather gym bag and one pair of white sandals from Public School — both one-offs were from the designers’ respective spring shows. Earlier this year, Fancy hooked up with actor Edward Norton to sell a recreated version of the Osklen field jacket that his character wore in the Academy Award-winning film “Birdman.” Sales from the limited run of 300 jackets benefited the Maasai Wilderness Conservation Trust. Last week Fancy launched a Mary Hoffman-designed limited-edition tote with Maybelline products through a Glamour alliance that directed all proceeds to The Girl Project.

In other news, Fancy is working on a soon-to-be-announced deal with Not Just A Label, according to Einhorn. Fancy also hosts online shops for brands and stores, powering such ones as Gwen Stefani’s Design With Purpose and Clare Distenfeld’s Fivestory site.