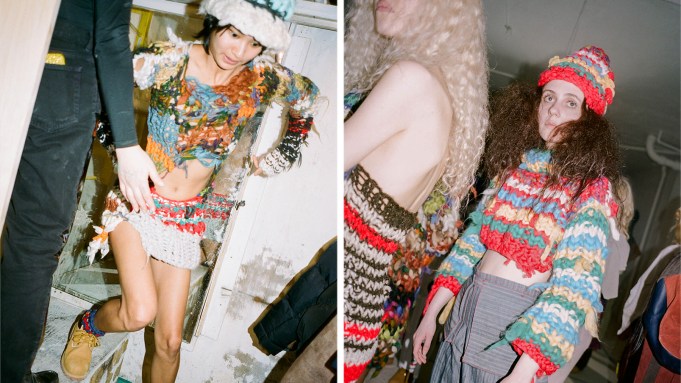 It was the evening after New York Fashion Week had ended, but the road was not yet over for Claire McKinney and Sophie Andes-Gascon of the emerging label SC103.

Last week the design duo showed their sophomore collection in an empty storefront on lower Ludlow Street — where the runway spilled out onto the sidewalk, causing models and errant pedestrians to share the same pavement. It demonstrated McKinney and Andes-Gascon’s willingness to cast themselves outside the established fashion industry.

Uncertain if they would ever show again, the collection was a now-or-never effort, with the designers parading a bounty of references and techniques that explored elements of femininity and handicraft. This season the same crowd returned to see a thoughtful, more focused collection that was based in shock.

One evening in the months after their last show, McKinney and Andes-Gascon’s apartment caught on fire, destroying most of their belongings. Their inaugural collection, however — then part of an exhibition in lower Manhattan — was spared.

Uprooted from their home of six years, McKinney and Andes-Gascon considered themselves too displaced — both physically and creatively — to produce another collection. They changed their minds with less than a month to go before New York Fashion Week, giving themselves about three weeks of strict deadlines to work toward in the wee hours after their day jobs, McKinney at Nassir Zadeh’s label and Andes-Gascon at Ulla Johnson.

“We were picking up the pieces and saw a show as a great way to focus our energy again and recenter, it was a great way for us to get in touch with ourselves and the new space,” said Andes-Gascon.

An artful range of knits and utility pants resulted, playing to the designers’ state of mind, essentially comfortable clothing for women on the move. “We sort of resorted back to our comfort zone. Claire was focusing on making clothes that were very wearable and utilitarian — I’m sure emergency situations were on her mind — whereas I was in this super cozy nesting zone which is where the knitwear came from, too,” she said.

In divvying up a season’s worth of work, McKinney dug into her own design archives to revive a series of wide-leg wrap pants while crafting tailored pullover shirts and skirts from utility material. Andes-Gascon spent late nights on the floor of their new Crown Heights apartment hand-knitting sweaters, hats and socks from lambswool roving.

“This season is a little bit darker of a vibe, we were looking inward rather than outward,” Andes-Gascon said of the collection. “We chose a couple of techniques to highlight — last time was a big celebration we were not sure what would happen after that, we had a lot to say and wanted to say it all. This time we were more conscious about every little thing going into it.”

The designers are selling what they hope will become a signature handbag — a tote made of links from recycled leather — at Nassir Zadeh’s store, priced at $500. They will slowly look to expand their retail footprint, working with small boutiques that support one-of-a-kind, seasonless product.

“There is no rush for us to start selling things, we don’t want to scale up if we are not prepared and ready for production. We’d rather move slower than faster,” said Andes-Gascon.

She and McKinney’s day jobs may force them to create collections in the overnight hours, but it also affords them the financial security to design with unparalleled independence.

“We love deadlines and working to the bone, that’s really fun for us and a great distraction,” Andes-Gascon said. “The fact that we do have other jobs and don’t need this to be our only source of income gives us liberty to make it more about celebration than being so focused on what this brand needs to do for us.”