Life was a beach at the recent trade shows — at least design-wise, as swimwear was a focal point for a growing number of brands. 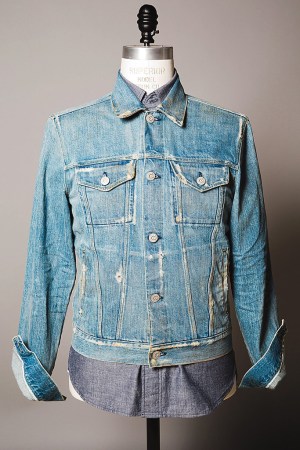 Life was a beach at the New York trade shows — at least design-wise, as swimwear was a focal point for a growing number of brands. In sportswear, trends included nautical themes and earthy prints, like ikat and Baja, while sporty European tailoring added refinement to a number of collections.

3×1
Denim denizen Scott Morrison’s latest brand homes in on the luxury end of the jean business. The collection uses the highest-quality selvage denim — many fabrics are exclusive to 3×1 — constructed on single-needle sewing machines using hand-painted enamel buttons and custom-made zippers. Meticulously worn-in jackets and lightweight denim shirts are also offered. And for those looking for something other than denim, the brand has twills, chambrays and corduroys. Spring also marks the entry into selvage chinos. Prices range from $265 to $425.

Craft Atlantic
This contemporary sportswear collection, designed by Victorinox veteran Pierre-Henri Mattout, is targeted to the traveling man. The spring offering has a nautical feel and includes travel-friendly pieces such as summer parkas, deck jackets and a quilted take on a bright yellow life vest. Fabrics include high-end nylon and cotton, and there’s liberal use of colorblocking and graphics. A standout of the collection are the printed polos using images from photographer Karine Laval. Prices range from $160 for the polos to $560 for the parka.

Ben Minkoff
With Uri Minkoff, brother of Rebecca and chief executive officer of the firm, now designing the men’s accessories, the collection has taken a new turn. In prior seasons, the line focused primarily on Americana and heritage pieces, but the offering has been updated to concentrate more on the urban man. New silhouettes such as the “man-velope,” are slim and sleek with clean lines and minimal hardware. Streamlined backpacks, computer cases and weekenders are designed to fit a variety of devices in a nonbulky way. The line’s signature detail is contrasting zipper tape in yellow and navy.

K-Way
Founded in Paris in 1965, K-Way has become famous for waterproof jackets that fold into a small hip pouch. For spring, the brand has branched out beyond its classic collection — available in 12 colors for men and 15 for women in full- and half-zip varieties — into a variety of patterns. There are camo or jungle prints, ombrés and heathers, as well as an assortment of reversible models with a solid on one side and a print on the other. For spring, the company has also teamed with Versus Versace to offer a reversible rain jacket with an eye-catching black-and-white print on one side and solid black on the reverse. The print is also offered on an iPad case. The Versus product will only be sold in Versace and K-Way stores.

Rodd & Gunn
The New Zealand brand, which got its start in 1946, focuses on traditional men’s wear staples targeted to the outdoor enthusiast. In fact, its logo is an English pointer hunting dog. The brand recently entered the U.S. market and has taken a few cues from American retailers by injecting some color into its offering for spring. The line continues to be classic, however, with Liberty prints from England on the sport shirts and floral prints in masculine colors. Casual linen dress shirts and shorts shown with softly tailored blazers were a hallmark of the spring collection.

Cremieux
The Dillard’s exclusive on the Cremieux brand in the U.S. will end in spring, and the French label, which opened a New York showroom and headquarters last year, is opening up to specialty retailers here. The new collection — heavy on preppy, nautical and safari influences — is a separate, higher-end line that is also currently sold in Europe. It features European fabrics, European production and a bit more flair and panache than the existing department store product currently found in the U.S. Stephane Cremieux, son of founder Daniel Cremieux, is spearheading the expansion of the brand from New York.

Thaddeus O’Neil
Artisanal beachwear is probably the best way to describe the standout new label from Thaddeus O’Neil, an avid surfer, writer, poet and photographer based in New York. Now in its second season, the collection includes patterned board shorts in French twill or ultrasuede, oversize hoodies in quilted Japanese cotton, drop-crotch lounge pants in chambray and striped onesies in cotton jersey. The uncommon designs reflect O’Neil’s passion for travel and his enthusiasm for texture and tonality in indigenous fabrics, as in a hand-loomed ikat poncho.

Ben Sherman
The British brand streamlined its top-end Plectrum assortments, cutting the size of the collection as it rejiggers its strategy in the face of challenging sales. The line this season worked a parachute theme, with blazers, jackets and shirts fashioned from lightweight nylon decorated with the patterned framework of a parachute. In its core label, Ben Sherman relaunched a significant denim program after a few seasons away from the category and also dove into an extensive swimwear offering.

Faherty Brand
After launching with men’s and women’s swimwear on its e-commerce site this past spring, Faherty Brand showed its full range of sportswear to potential wholesale accounts. Shown in a tricked-out trailer that twin brothers Mike and Alex Faherty have been driving across the country to beach communities, the spring 2014 lineup includes garment dyed polos, double-face flannel shirts, French terry sweatshirts and Baja ponchos, all in a laid-back vibe with the promise of an endless summer.

Frank Clegg
Founded in 1970 and based in Fall River, Mass., leather maker Frank Clegg has reinvented itself from the days when a multitude of small, independent leather shops made up the base of its business. The company has done private label, started a vigorous e-commerce business and still creates timeless designs from drum-dyed, vegetable-tanned leather. This season, it offered carpet-style bags with English trunk locks, a range of classic briefcases and trophy pieces like an alligator overnight bag priced at $15,000.

Benson
On the opening day of Liberty, Benson had its best first day of a trade show ever, said a saleswoman for the colorful, casual sportswear brand, reflecting the strong traffic at the new trade show. Benson showcased a major swimwear push, with a wide range of trunks in camo, ikat, paisley and floral patterns, retailing for $98. Woven shirts were available in identical patterns for an eye-catching merchandising opportunity.

Beretta
Beretta is the oldest industrial company in the world, founded in 1526 as a firearms maker. Unbelievably, the brand is operated by the 15th generation of the Beretta family and is still based at Gardone Val Trompia in Brescia, Italy. The label has moved beyond its roots and now offers a full collection of apparel and accessories, all with the upscale hunter in mind. Waxed cotton quilted jackets, linen field jackets with gusseted pockets, a Serengeti jacket with fabric-covered buckles and a Maremma cow-herder hunting jacket were among the offerings for spring.

Tallia Orange
The youthfully skewed Tallia collection from Peerless Clothing continued to up the ante for spring. The moderately priced line, which appeals primarily to the young guy looking for something unique, is also finding success by stepping out of the box just a little bit. Case in point was a polyester-rayon blazer with a soft hand, trimmed with white piping that was available in either blue or red. “Young people are dressing up, and they feel good when they put this on,” said Peerless president Ronny Wurtzburger. Other key pieces included solid cotton blazers with zippered pockets in orange, green, khaki and other updated colors, as well as seersuckers with contrasting undercollars and edging.

DiMaestro
The upscale Italian brand chose MRket for its U.S. debut. The collection of classic men’s wear items including jackets, knitwear, outerwear, shirts and scarves are created from high-quality Italian fabrics such as cotton cashmere for a long-sleeved garment-dyed polo. Half-canvas sport coats with matching pants are offered in subtle patterns. Matthew Singer, men’s fashion director of Neiman Marcus, said the collection reminded him of Ivory soap with its clean, pure offering. Prices include $399 to $530 for trousers and $1,399 for jackets.

Pasotti
This Italian company has been making high-end umbrellas and related products for more than 60 years. The artisanal brand produces private-label offerings and is now making a push for its own brand in the U.S. market. Each umbrella is hand-made, so handles and fabrics can be adapted to individual tastes. A striking assortment of silver handles with images of lions, skulls and ducks shared booth space with shoehorns and canes. Umbrellas were priced to retail at $225, and shoehorns around $175. In addition, Pasotti also offered a more classic grouping with handles and shafts hand carved from individual pieces of ash or chestnut and striped or plaid fabric.

Simon Miller
A timeless fit and expert, authentic washes are the understated selling points at Simon Miller, where a classic approach to denim is the centerpiece of the tightly edited assortments. For spring, the New York-based denim brand is introducing a new narrow fit with a 13-and-a-half-inch leg opening, versus its standard 15-and-a-quarter-inch opening. Priced from $265 to $355, the new M001 fit comes in raw denim, an ozone-treated denim, a sun-faded vintage style and white denim that has been crunched for texture, all ready to become timeworn favorites.

General Knot & Co.
The husband and wife team behind General Knot & Co. are seasoned industry pros, but their patterned ties, belts and pocket squares have an amiable, homespun quality to them. Andrew Payne was previously a design director for men’s wear at Tommy Hilfiger, and Ann Payne was creative director at Original Penguin. Their own line, launched in 2010 and produced in Massachusetts and Vermont, uses dead-stock fabric, some of it dating back to the late 1800s, giving each design a one-of-a-kind look.

Jack Spade
The accessories maker used a technical riff on oxford cloth for a duffel bag, briefcase and dopp kit. The signature dipped-in-colored-latex technique it uses to waterproof the bottoms of bags was incorporated into apparel, with the bottom of hoodies and pocket T-shirts getting the same treatment. In sportswear, Jack Spade offered up everyday classics like suede bomber jackets, slim chinos and performance outerwear with heat-sealed seams.

Etiquette Clothiers
Upscale underwear and socks maker Etiquette Clothiers branched out into swim this season, with trunks targeted at the 30- to 55-year-old set. The polyester-nylon designs are made in Italy and come in eight prints — such as waves, beach balls or flamingos — and four solids, with either a 7-inch or 4-and-a-half-inch inseam. There’s an elastic waist in the back for fit but a nonelastic waist in the front for a cleaner silhouette. “This is for the guy who’s graduated from Sundek,” said Benjamin Vergnion, Etiquette Clothiers’ chief executive officer and creative director.

Fahlgren
Brooklyn-based tie maker Fahlgren has branched out into knitwear for the holiday with a small group of sweaters adorned with racing stripes and inspired by the 1969 Robert Redford flick “Downhill Racer.” The retro designs are a fitting addition to designer Brett Fahlgren’s narrow ties in silk, cotton or chambray fabrics, decorated with nostalgic emblems like wooden tennis rackets and vintage station wagons.