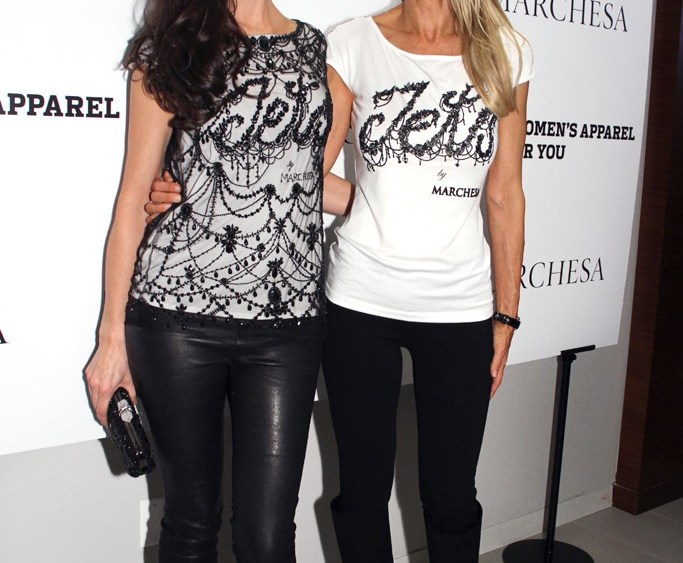 NEW YORK — The ladies took the spotlight at the NFL headquarters Tuesday night when the league’s offices were transformed into a fashion presentation for the introduction of a high- end T-shirt designed by Georgina Chapman, cofounder of Marchesa.

For more than a year, Chapman and Suzanne Johnson, wife of New York Jets owner Woody Johnson and brand ambassador for NFL women’s apparel, have been working on the “sport meets couture” project. The fruits of that project were unveiled at the event, where the limited-edition $110 shirt, which is covered in Swarovski Elements, was introduced. The top, made from a viscose jersey fabric with the team’s name spelled out in a feminine beaded pattern, will be sold online, at MetLife Stadium and the Jets’ Manhattan shop.

Johnson, who wore one of the Ts under a Theory blazer with leggings and boots, said the idea was to mix “high and low. Georgina is known for her red-carpet staples, but they’re out of touch for most girls. Her husband [Harvey Weinstein] is a huge Jets fans, so I asked her to design something. She said yes immediately.”

Since the shirt was created, Johnson said, five other teams have come forward asking for their own versions — the Pittsburgh Steelers, Washington Redskins, New Orleans Saints, Baltimore Ravens and Kansas City Chiefs.

Chapman is not so sure she’s up for creating versions for other teams. “I’ve had so much fun with this, but my husband is a Jets fan, so I had to do it.” And if she whips some up for the competition, “I might be divorced,” she said with a laugh.

Chapman also created a couture version of the design, which was auctioned off, with proceeds going to the NFL’s A Crucial Catch campaign, which helps raise funds for the fight against breast cancer. Guests also bid on a Marchesa dress, a Marchesa bag and four tickets to a movie premiere, with the funds going to Chapman’s charity, the Rose Home for Girls.

The shirts will be featured in the NFL’s new women’s-themed ad campaign, worn by Melania Trump, DJ Kiss, Summer Sanders and others.