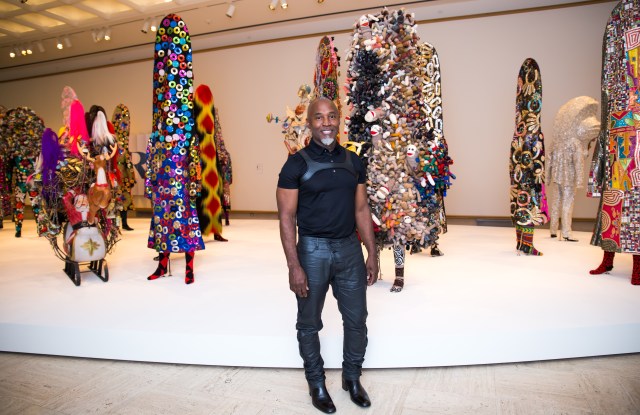 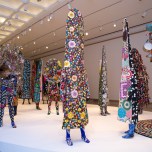 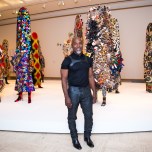 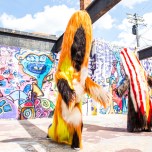 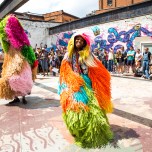 DETROIT — Can art help invigorate Detroit? Nick Cave, who considers himself a messenger first and artist second, thinks so.

Cave, the performance artist best known for his vibrant soundsuits that have been cited for inspiring the collections of designers like Kenzo and reside in the homes of celebrity art collectors like Jay Z and Beyoncé, says the timing was right for “Here Hear,” his current and longest-running solo exhibit at Cranbrook Art Museum in Bloomfield Hills, a suburb of Detroit, which closes Oct. 11.

“They invited me to do the exhibit. I said I would only do it if I could do some outreach work in Detroit. It all happened to be at the same time. It happened with Detroit being on the map,” says Cave, a graduate of Cranbrook Academy of Art and professor of fashion design at the School of the Art Institute of Chicago. “There’s a shift happening in Detroit with the artists and the industries — these cultural entities and forces who are changing and influencing and inspiring the neighborhood.”

The exhibit, which features a series of free performances and educational programs throughout the city designed to engage the community, is gearing up for “Heard Detroit” on Sept. 26. The show involves about 100 inner-city high school dancers and musicians from the Detroit School of Arts and 30 of Cave’s life-size horse costumes, operated by students, performing along the Detroit riverfront. “Heard” was previously staged at New York’s Grand Central Terminal with Alvin Ailey dancers.

“I’m just coming there as an artist who works between installation and performance,” Cave says. “I’m here introducing Detroit back to Detroit. I’m working with musicians and dancers that have never met each other. Everyone I want to work with has to be part of the Detroit culture — that was really important.”

The 7,000-square-foot exhibit showcases about 40 soundsuits. There is a film component, with “Map in Action” depicting video footage shot by the Right Brothers of the exhibit’s live performance series. The second film, “Up Right: Detroit,” a short feature film about a group of young adults from the Ruth Ellis Center costumed in soundsuits, will premiere on Sept. 24.

Cave’s presence in Detroit, still considered one of the most segregated cities in America and in the process of coming out of the largest municipal bankruptcy filing in U.S. history, may offer a flicker of brightness for the city and its artists.

“This is a moment when the city is redefining its future. What Nick does, he’s always on these amazing hunts and finding different materials and reimagining them into something extraordinary,” says Laura Mott, curator for contemporary art and design at Cranbrook Art Museum. “Nick’s work really addresses the racial and societal issues that parallel the kind of conversations we’re having in Detroit about the future.”

The importance of the exhibit for Detroit cannot be overstated.

“Our goal [of the exhibit] was to change lives,” Mott says. “It may sound ambitious, but it was about taking his work and making imprints on the city and the residents of Detroit. Over 100 Detroiters will have physically worn soundsuits. I wore one of the horse costumes and it is quite heavy. Seeing the images of my movements, there is an enormous amount of pride being inside of one.”

Cave, who never identified with being a black male until he arrived in Detroit as a student at Cranbrook, created the first soundsuit, made of twigs found in Chicago’s Grant Park, in reaction to the Rodney King incident in 1991.

“That was the initiator that got me to work in this medium,” Cave says. “What does it feel like to feel less than, to be profiled? I don’t know that from my perspective, although I’m a black male. I think about Trayvon Martin. I could be giving a lecture, I could be standing at one of the collector’s or donor’s homes and I could say I’m going to walk home and I could be that person that is being violated. The moment I step outside the privacy of my own space I’m one of the statistics that could be put in harm’s way.”

“[The soundsuits] force you to look at them without judgment. It gets back to differences. How do we embrace our differences?” says Cave, whose next exhibit at Massachusetts Museum of Contemporary Art in North Adams, beginning in 2016, will examine the experience of being “in the belly of a soundsuit.” “You’re looking at this hybrid human, yet it’s foreign, yet it has this sense of authority, how do we come to that and be open to a different kind of acceptance?” he asks.

As mesmerizing as Cave’s soundsuits may be, one in particular hits a timely nerve: TM 13, created in memory of Trayvon Martin.

“The work in this room is very in your face, but it’s very sensitive, contemplating,” Cave says. “It’s a contemplative state of conscientious. It’s about me sort of wanting you to join me in this political conversation. It really pertains to us all.”