PARIS — As it celebrates its 60th anniversary, the house of Courrèges is starting over with a new tandem tasked with reviving the Space Age label.

Artistic director Nicolas Di Felice, who spent most of his career working alongside Nicolas Ghesquière, will present his first collection on Wednesday during Paris Fashion Week. This will be followed by the opening of a second store in Paris, which chief executive officer Adrien Da Maia hopes will draw in a younger, more fashionable crowd.

In an exclusive joint interview with WWD, the two men laid out their vision for the brand founded in 1961 by André Courrèges and his wife Coqueline. Now owned by Artémis, the family holding company of French billionaire François Pinault, the house is starting again from scratch, but with an aesthetic firmly anchored in its hugely popular vintage designs.

“Nicolas and I are approaching this almost like entrepreneurs. We’re writing a new story for this house,” Da Maia said. “It needs an artistic director who understands its heritage, but who is resolutely modern.”

Di Felice teased his vision with a film in December showing couples making out, and a New Year’s advertising campaign consisting of the word “Courage” on a white background.

“I’m a romantic,” he said, explaining that his fascination with love and human connection has only been exacerbated by the coronavirus pandemic. “This is what I’m bringing new to Courrèges.”

In time-honored tradition, the designer began his tenure by delving into the house’s archives: 10,000 pieces of women’s ready-to-wear and accessories, and more than 50,000 documents, according to a recent inventory. But what spoke to him were not its signature clinical white dresses and go-go boots.

Instead, the 37-year-old found an edgier side to Courrèges that chimes with his Belgian temperament and training at La-Cambre fashion school in Brussels. A case in point: the opening credits of the 1973 political satire “Moi y’en a vouloir des sous,” showing models in bright Courrèges outfits hurling paving stones at riot police — a nod to the 1968 student protests in Paris.

“With Courrèges, people tended to always show the same images of girls in wigs dancing and laughing. It was really dated,” Di Felice said. “My favorite Courrèges fashion show is from 1972, and it was held at a wrecking yard. You never see that one, because it’s dark. The models look like dots of color against the grayness.”

As someone who has always enjoyed the technical aspect of clothing, he appreciates the directness of the Courrèges approach: geometric shapes and blocks of color used to graphic effect.

“It’s minimal. André Courrèges created a total universe, which to me is radical. That’s something that spoke to me right away, because I’m not big on embellishment. I don’t like using prints for the sake of it — it must be my northern side,” he said.

The approach is reflected in the recent renovation of the Courrèges flagship on Rue François-1er in Paris. Belgian architect Bernard Dubois directed the overhaul of the minimalist, all-cream space, which is covered in carpet, with fabric on the walls and ceilings. 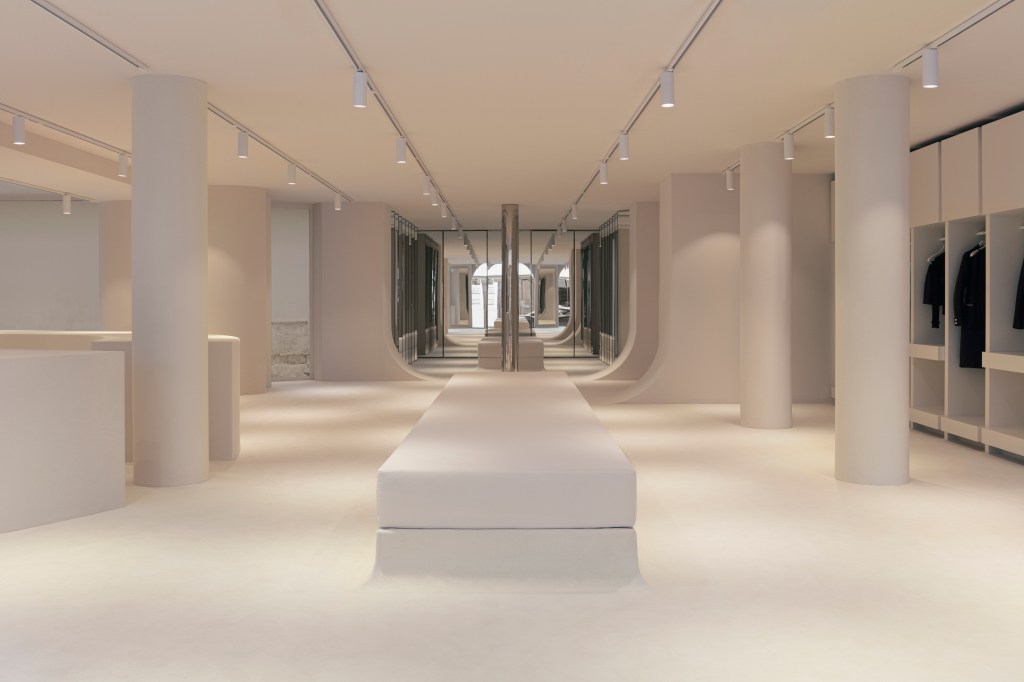 Courrèges has refurbished its Paris flagship.  Courtesy of Courrèges

On the racks are reedited house icons, including the label’s signature cropped vinyl jackets in shades ranging from maroon, navy and black to sunflower yellow, baby pink and electric blue. Every item features the logo of the house, which has been reworked to bring it closer to the original, after several restylings in recent years.

Jackets retail for 750 euros and coats for 990 euros, while bags go from 190 euros to 470 euros. Da Maia said it was important to find an attractive quality and price positioning for the seasonless collection, which won’t be discounted.

“We wanted our collections to speak to a new generation that wants to buy smarter,” the executive said. “There is too much product on the market, so you can’t relaunch a house in 2021 without having a very considered approach to the clothes, the prices and the communication.”

As one of the pioneers of ready-to-wear, Courrèges introduced a standardized, industrial approach in the early 1970s, which in part explains the thriving resale market for his original creations.

The owner of several vintage Courrèges pieces himself, Di Felice has delved into the Instagram accounts of brand devotees and is keen to capitalize on their loyalty with his first full collection. “It would be bad if it made the girls who own the vintage stuff look outmoded,” he said.

“I want to propose products that are creative but still wearable. I love cutting, so we do a lot of fittings. The clothes should make you look good, and they should be made in a way that respects the environment and good labor conditions. Above all, they should be the type of clothes you won’t want to throw away after six months,” he said.

On his mood board for fall 2021 were archival looks including a 1960s-era kimono coat with prominent seams, and a spring 1963 checked skirt suit, both strongly influenced by Balenciaga, where Courrèges worked for a decade before striking out on his own.

It’s reminiscent of one of Ghesquière’s most memorable collections for Balenciaga, his fall 2006 lineup of short checked tweed suits and cocoon coats — though Di Felice only joined the team two years later in 2008. He later worked under Ghesquière again at Louis Vuitton, rising to senior women’s wear designer.

“I’m sure there are people who will say my work reminds them of Nicolas’, just as people said Nicolas’ work reminded them of Courrèges sometimes. I’m expecting it, but I’m not going to renege where I come from,” the designer said.

“Working alongside him was incredible. It never ceased being inspiring,” Di Felice added. “He’s constantly researching. It allowed me to attain an even greater degree of technical know-how and precision, which may be a pain for other people, but is nonetheless incredible, so I’m not looking to break away from that.”

“I wasn’t hellbent on becoming artistic director. But I got to 35 and I thought to myself, it would be great in terms of my job evolution to be able to express myself, but also to really dig deep into a brand,” Di Felice said.

“I’m not going to lie, there are very few houses that I think I would have felt comfortable taking over,” he added. “I feel good here. I’m lucky enough to work with an incredible heritage.”

His first designs mix a purist approach — a trim white coat uses the same pattern as a Sixties original, but in a much more user-friendly, lightweight fabric — with tougher pieces inspired by his love of clubbing and electronic music. Think a black vinyl top with cutouts running across the arms, or a leather biker jacket with a wool collar.

This is the third attempt to revive Courrèges since former Young & Rubicam ad executives Jacques Bungert and Frédéric Torloting bought the label from its founders in 2011 and set about relaunching it through collaborations with companies including The Estée Lauder Cos. Inc., Eastpak and Evian.

In 2015, they appointed design duo Sébastien Meyer and Arnaud Vaillant, who during their two-year tenure designed their presentations like mini Apple-product launches, and introduced tech touches like heated coats.

Having sold an initial stake to Artémis in 2015, Bungert and Torloting left in 2018, leaving Pinault in full control. Around the same time, the company underwent a restructuring that resulted in the closure of its historic production facility in the southern French city of Pau, where Courrèges once employed almost 300 seamstresses. 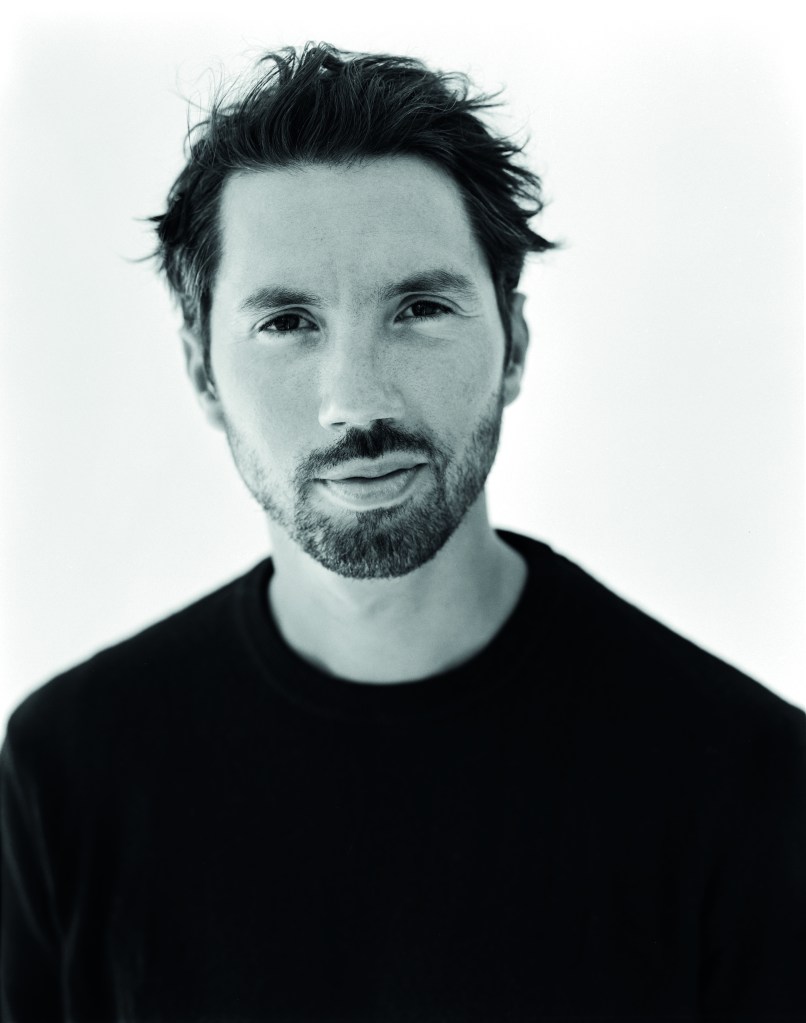 Da Maia noted the brand has eliminated all licenses and has no plans for collaborations. Production takes place in Portugal, Italy and France, and Courrèges has worked with an Italian manufacturer to develop a more sustainable vinyl, with a base made of recycled jersey and a plastic coating that is 70 percent vegetable-based.

Though it no longer has any stores outside of France, the brand plans to open a smaller boutique in the upper Marais district of Paris this month, also designed by Dubois. “This store will allow us to create a bridge to younger customers, without denigrating the history of the house and its historic flagship,” Da Maia explained.

Courrèges plans to expand e-commerce, currently available only in Europe, to key markets including the U.S. in March, and Japan in the second half of the year, with China to follow in 2022. Though the fall collection is not see now, buy now, Da Maia hopes to have some products available for sale shortly after the show.

He hinted that a new perfume is also in the works. Known for fragrances like Empreinte and Eau de Courrèges, the company now develops its fragrances in-house. “Perfume is part of the history of the house and is something we feel strongly about,” said Da Maia. “I think it’s also a great way to make Courrèges more democratic again.”

Despite its prestigious backer, the house is setting its course outside the framework of a major luxury group. Artémis is the majority shareholder of Kering, the parent company of brands including Gucci, Saint Laurent and Bottega Veneta, led by its chairman, François-Henri Pinault, the son of company founder François Pinault.

But the only other fashion asset in the Artémis portfolio is a minority stake in Giambattista Valli. The group’s other properties include the auction house Christie’s, the Château Latour vineyard, the luxury cruise specialist Ponant and the Stade Rennais Football Club. Artémis also has a stake in Farfetch.

Da Maia said it was an advantage for a smaller brand like Courrèges, which employs 65 people, not to be subjected to the scrutiny of a listed entity.

“It allows us to be supported with none of the constraints of a large group, which means we are free to innovate and create a modern narrative for this house, without being hemmed in by a rigid business plan. That’s the kind of energy a brand needs to grow,” he concluded.