Louis Vuitton's next show will mingle the past and the future, including a nod to gender-fluid dressing.

While he is frequently pigeonholed as a “futuristic” designer, Nicolas Ghesquière says he often takes in a broad survey of history to arrive at fashions that he feels are very right for today — and tomorrow.

A case in point: His show for Louis Vuitton today will take place at La Samaritaine, the riverside Paris department store founded in 1870 and acclaimed for its harmonious blend of Art Nouveau and Art Deco design elements. Landmarked portions have been gloriously restored for its reopening sometime in early 2021, while the Rue de Rivoli end of the hulking building now boasts a rippling facade of reflective glass by cutting-edge Japanese firm SANAA.

Meanwhile, Ghesquière’s collection for spring 2021 will wink back to the early 20th century, a fecund time for 166-year-old Vuitton, while exploring today’s new wave of gender-fluid dressing.

“You know how much I’m in love with time clash. This is a subject that I’m really inspired by. I mean, I couldn’t dream about a better space to show, mixing this beautiful masterpiece of history with one of the most brilliant architects of today,” Ghesquière said in an interview ahead of a physical runway show that will blend green-screen technology and other digital razzmatazz to reach a worldwide audience.

While he has invited the fashion crowd to locations as far afield as São Paulo, Palm Springs and Kyoto to stage Vuitton shows at architectural marvels by Oscar Niemeyer, John Lautner and I.M. Pei, respectively, Ghesquière found in La Samaritaine — bang across the street from Vuitton headquarters — a brilliant time capsule, and a place that evokes fond personal memories of his early days in Paris. 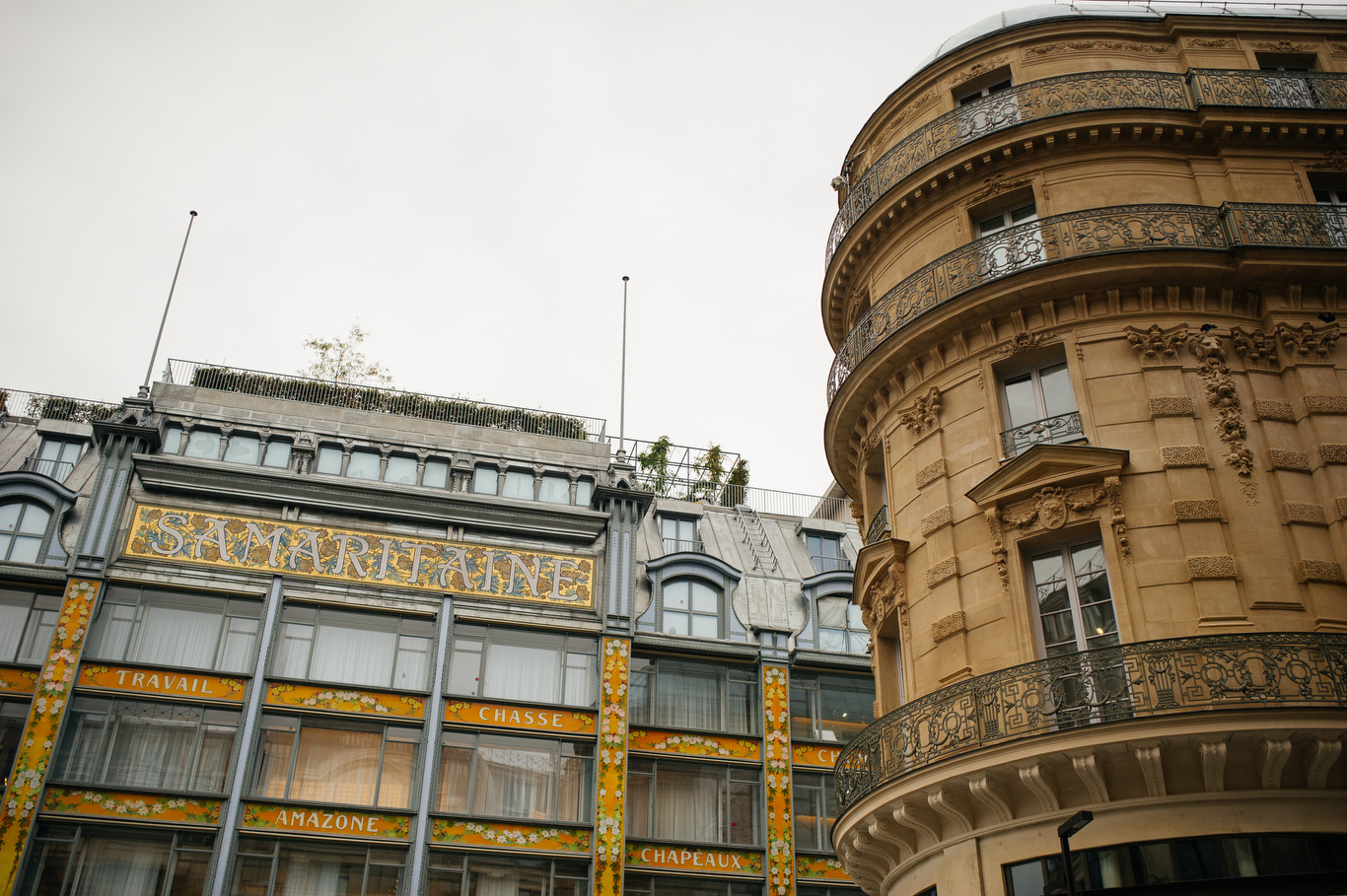 “I remember going there when I was working with Jean Paul Gaultier, rushing in to buy some ribbons at the last minute before a show,” said Ghesquière, who started his fashion career at the elbow of the enfant terrible before catapulting to fame at Balenciaga, and moving over to Vuitton in 2013. “It’s a little emotional in a way, and I do love this building that is almost like a big ship in the middle of Paris.

“The building is so stunning. Obviously there are a lot of beautiful Art Deco buildings in Paris, but this one, standing on the Seine River, is very unique,” he enthused. He also flagged that such a nearby location is practical and appropriate given the context of the pandemic.

For his twin fashion shows today, each with about 200 guests, Ghesquière has chosen the top floor of what is known as “La Rotonde,” a vast open space under a glass cupola framed by period metalwork staircases and monumental panels painted in an Art Nouveau style.

Guests will also encounter vast swaths of green-screen and many, many high-tech cameras as Ghesquière and Vuitton dial up — way up — the digital components of the show. As reported, it is expecting its livestream to attract a multiple of its last runway outing, which was watched by five million people online.

The designer describes three unique experiences: one for seated guests amid the Art Nouveau splendor; a second for Vuitton collaborators, friends, VIPs and top clients dispatched special links that will allow them to control a 360-degree camera remotely with their smartphone or table, and a third for those viewing the livestream, which will layer on additional content and visual effects thanks to green-screen and other technologies. 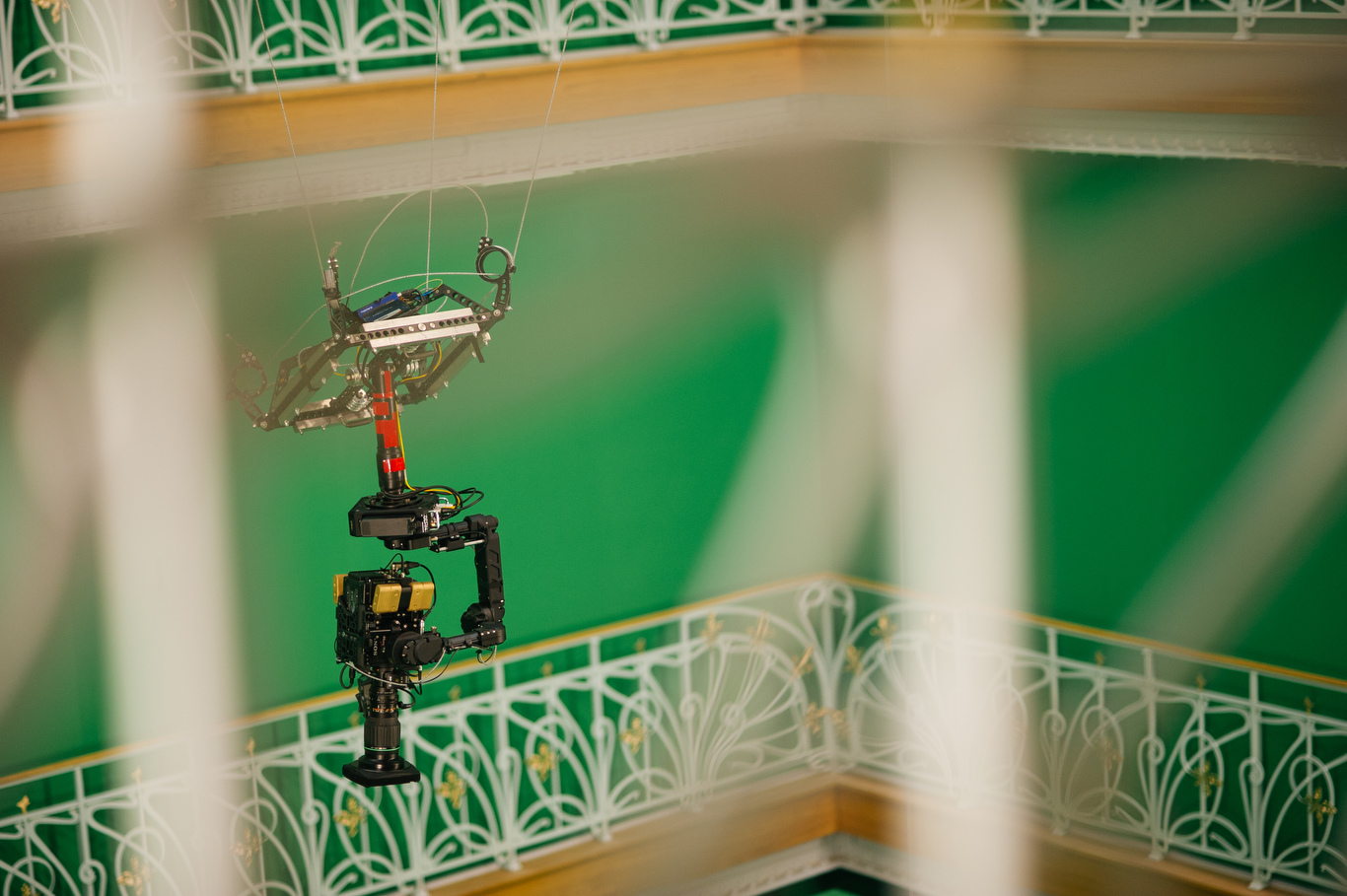 “This kind of fast-forward/rewind thinking is something very important in my creative process: to celebrate history, to celebrate patrimony, to celebrate references, and in the meantime to try to erase some of those inspirations to give the feeling of something that is truly new and innovative. I would say that is my goal every season,” the designer mused during a Zoom call.

Ghesquière’s fall 2020 show for Vuitton last March was a poignant fashion moment as the coronavirus was starting to tighten its grip on Europe. He titled his show “If the Past Could Look at Us” and it unfurled against a tableau of 200 characters dressed in costumes spanning five centuries, half of them singing their lungs out.

The Vuitton-sponsored exhibition at the Costume Institute at the Metropolitan Museum of Art in New York, “About Time: Fashion and Duration,” now slated to open Oct. 29, elaborates on the theme of temporality.

Ghesquière embraces his tag as a “futurist” designer.

“It’s true that I have a special sensibility for anticipation, and showing something that seems to look forward to a certain future. But I’m also very curious about what the past represents, what we know about it and how much corresponds to what we are now. I think, strangely, when we look for what is the future in fashion, it will be found often in the past of fashion.” 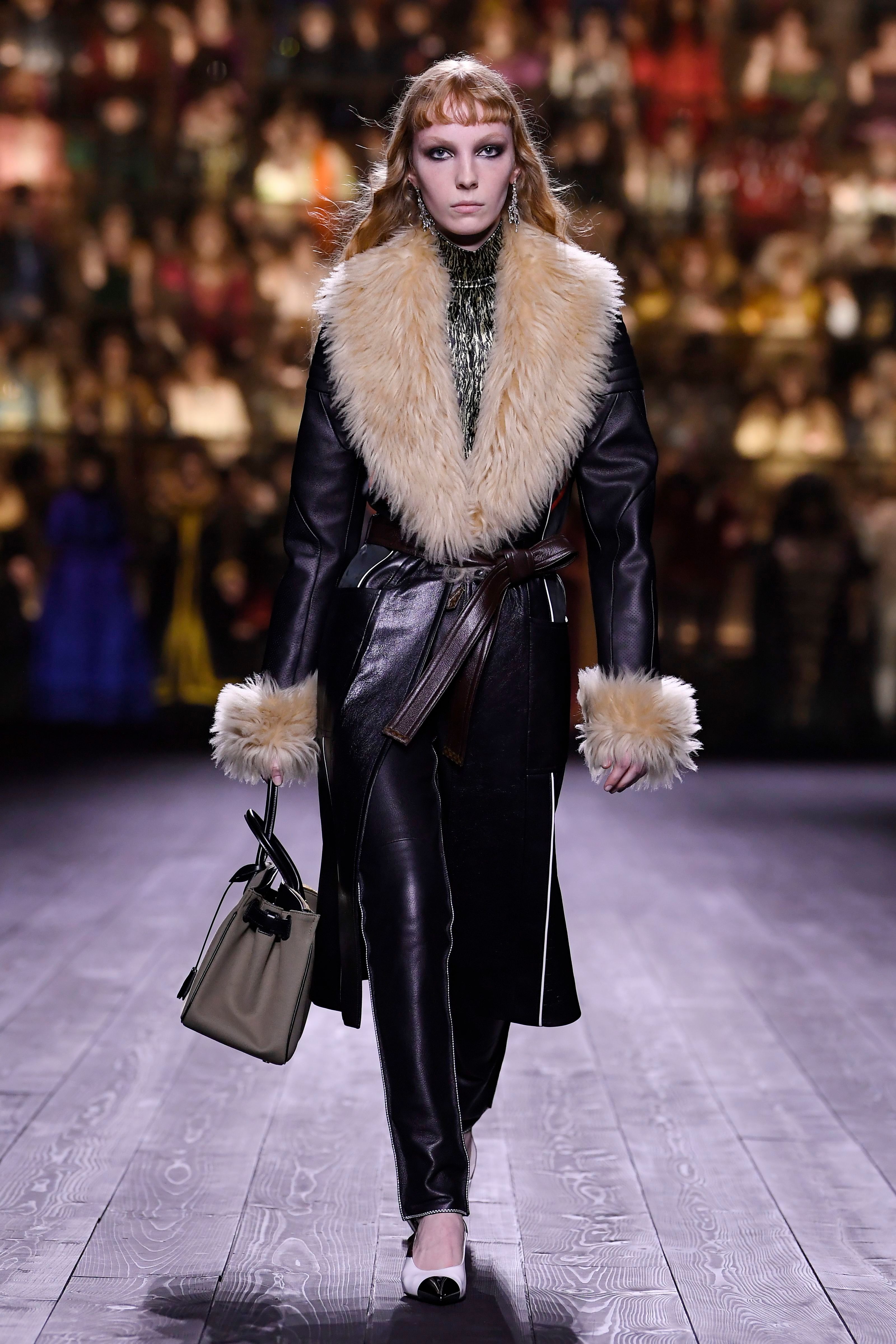 The spring 2021 collection is apt to reference the period after 1900, a period the designer often has in mind. “I think the real values of the brand were created at that moment,” he said, also mentioning the Roaring Twenties as another interesting period at the start of the new century.

All this will be clashed with the very contemporary phenomenon of gender fluidity.

He described it as a “very new zone in between women’s wear and men’s wear” that is being defined by nonbinary people who are “breaking the boundaries of gender, creating a wardrobe that is not unisex, that is not about a woman borrowing men’s clothes, or men borrowing a woman’s clothes. They are creating this zone in between genders that’s becoming their own. And it has a great influence on the way we are all changing our perception of what’s appropriate in regards to gender.”

Ghesquière hastened to add that he is not veering into the men’s category, or abandoning the women’s wear for which he is known, “but I would say the entire collection is in this spirit.…It’s more to highlight and show this possibility and this freedom for everyone.”

(It’s by no means new territory for the designer: He has featured transgender models, performers and celebrities at shows and campaigns in recent years.) 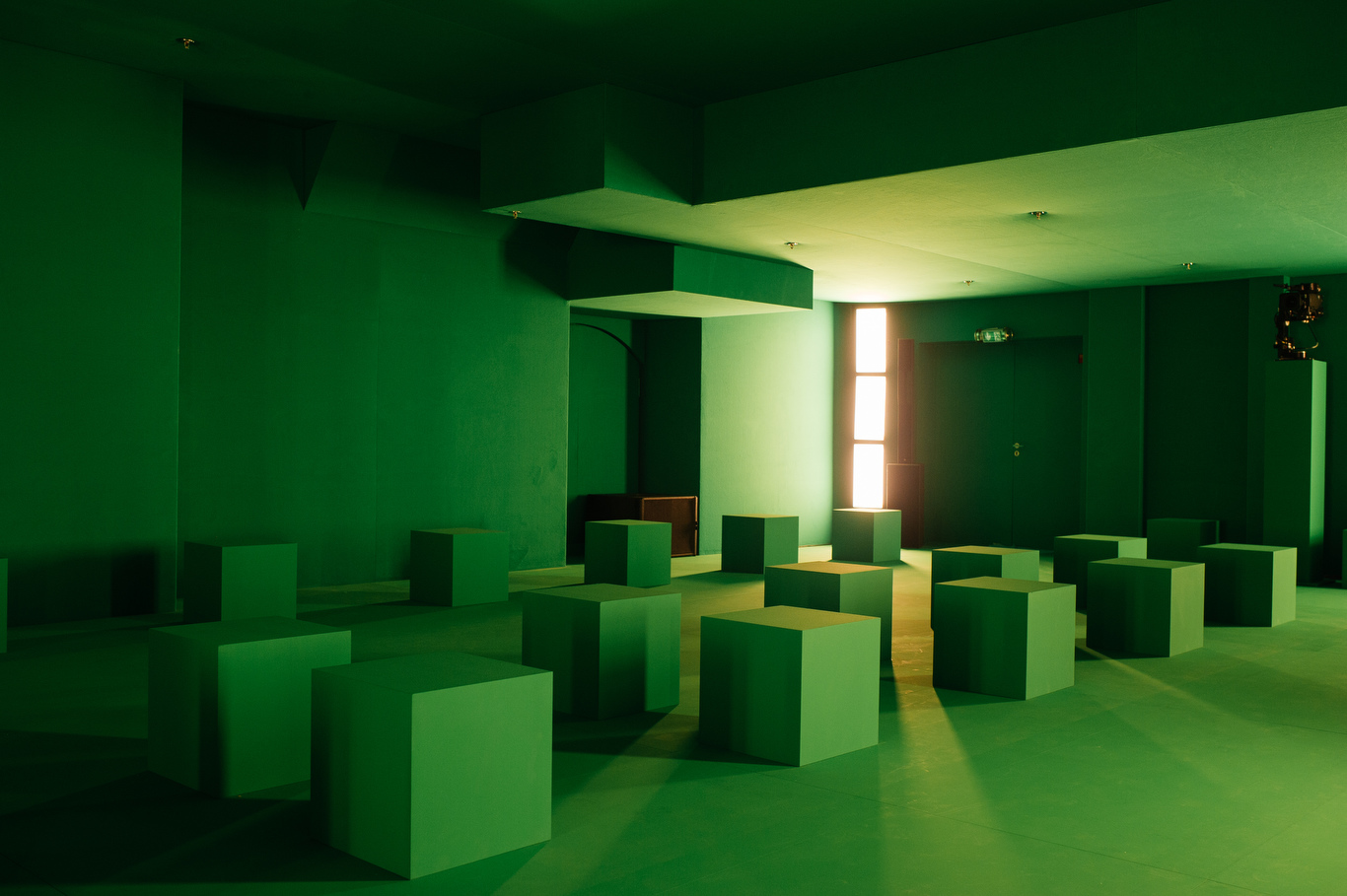 Asked how lockdown might have affected his perceptions of time and how consumers perceive fashion, the designer said the “slowdown has made people think twice about how they consume, what they really want to buy, what kind of things they will keep, and what kind of things they buy consciously knowing it’s for a shorter amount of time, which is great: It’s fashion, it should be pleasure, the pleasure of being right at a certain moment for the eyes of fashion people.”

The forced pause also helped him to appreciate anew the “privilege” he has to “have a voice in the fashion world.”

The designer noted that he attended the Chloé show during Paris Fashion Week to support its creative director Natacha Ramsay-Levi, formerly one of his key design deputies, and he was struck by the fact that guests lingered in their safely distanced wooden seats long after the finale walk was concluded and Ramsay-Levi had returned backstage after her bow.

While allowing that perhaps attendees simply did not have another runway show to rush to in this unusual season, he read it as a sign of renewed appreciation for such live events — and a reprieve from the tense, competitive atmosphere of a typical overloaded fashion month. 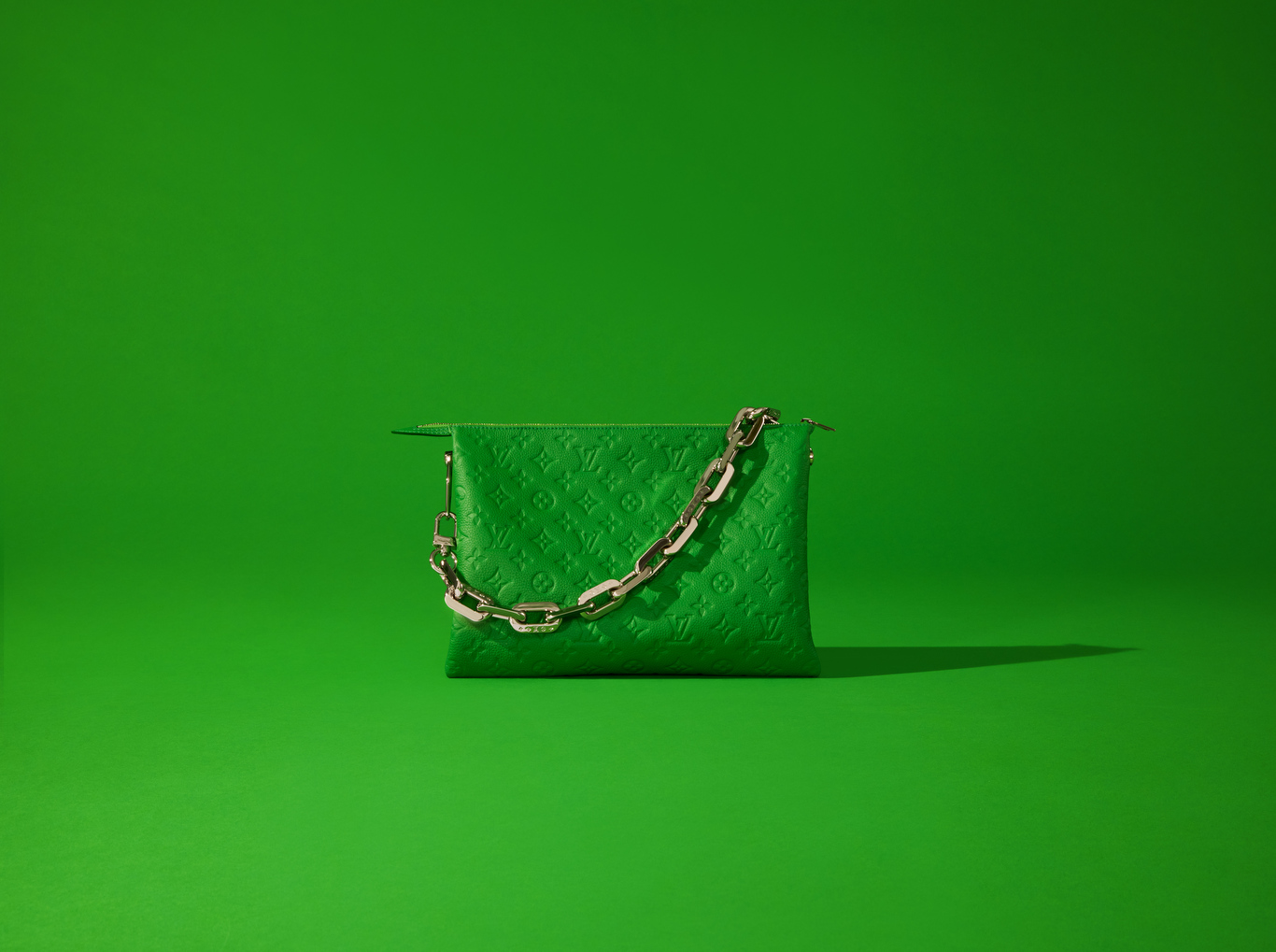 About destination shows, Ghesquière allowed that they are unlikely to resume anytime soon because of health concerns, travel restrictions, and the sustainability considerations of transporting people to such an extravagant event.

“There might be a different way of doing this in the future. I’m not saying we won’t ever travel with a collection to show it abroad or somewhere else, but I think we will have to think twice about the way we do it,” he said.

Yet he doesn’t think digital tools to showcase fashion represent the whole answer.

“It’s opening many more possibilities,” he enthused. “It’s great because people will not feel excluded….It’s a wonderful addition to give even more visibility and more access to what we do. I just don’t want the digital to erase the physical.”

He likened fashion to an artistic performance with all the elements of risk — and deadlines.

“The rush of the collection, the rush of making those clothes ready is essential to correspond to a real fashion idea. Fashion is that. Fashion has to be rushed at a certain moment to be right,” he said. “If we have time to do things, it’s not fashion anymore. It could be great clothes, it could be wonderful. And they might be super right and super timeless and fantastic. But they might not be fashion clothes. And the shows represent that.”

Ghesquière also made the point that fashion is not only about creating beautiful images for digital distribution, but about real products that require all kinds of savoir faire. “It’s also the production, the workers, the craftsmanship, the ateliers — everything. It’s all these people involved in this process that are absolutely essential to what we do,” he said.

And might any of those people be conscripted soon to launch a Nicolas Ghesquière brand? He laughed at the question, for it’s an idea he has floated publicly over the years that has yet to come to fruition — and probably won’t any time soon.

“It’s something that I wish one day could happen,” he said, joking that he might be dubbed “the oldest young designer” or the “oldest new brand.”

“But no, I’m focusing on Louis Vuitton,” he said, stressing this turbulent moment for the industry is not the right time for a new venture, and he will revisit his signature brand project when “the real need will be there.”

“It’s a possibility. We’ve worked on it, I’m not going to lie,” he said. “But I’m thinking, is this really the right moment?”

To be sure, Ghesquière’s workload at Vuitton seems to be only increasing, as he recently also took on the job of photographing advertising campaigns, with the fall 2020 spots breaking in August and featuring an array of personalities, including actress Léa Seydoux.

“I enjoy it so much and and since they asked me to shoot again for Vuitton, I guess they are happy,” he said, hinting that the spring 2021 campaign he will shoot in the coming weeks will incorporate another product line dropping next summer.

Louis Vuitton Is On Track to Make Sales History in China