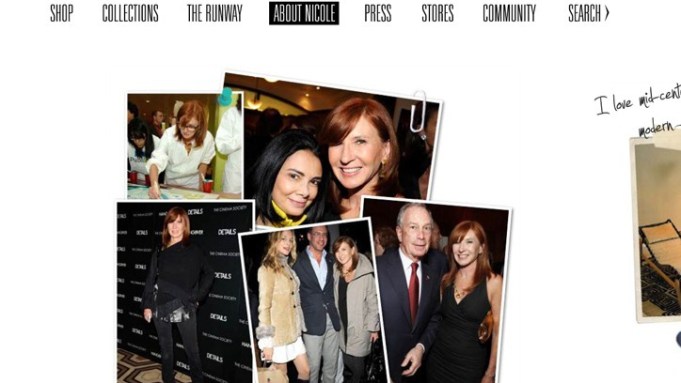 NEW YORK — Nicole Miller is taking a fresh look at the Web.

Today, Miller is unveiling an overhaul of her Web site, nicolemiller.com, giving it a modern, editorial feel that reflects the company’s recent updates in its advertising campaign, stores and showroom, and also gives a better sense of the designer herself, her personality and her lifestyle.

Miller said continually evolving technology inspired her to redo the site. “I had loved ours when we first started, but it just seemed dated now, so we wanted to freshen it up and give it a new look,” she said. “Technology is advancing at such a rate…you constantly have to update, and you can’t just take a Band-Aid approach. We wanted to do a major overhaul, so it’s radically different.”

The redesign has the feel of a magazine with a strong focus on visuals, from photographs to custom, printlike typography, immersive and intuitive flash collection galleries, improved e-commerce pages and a pop-up shopping cart that allows users a preview of all its contents.

Social media also plays a key role, and the site features user-submitted content, as well as Twitter and Facebook widgets. Miller already has a social media following — at latest count, NicoleMillerNYC had more than 49,500 Twitter followers, and the designer had more than 4,600 fans on Facebook.

“It can be the first place your client is going to see your company,” Agerbeek added. “It’s your voice, and like a campaign, it’s a part of your branding. We wanted to help use it to properly brand what Nicole Miller really is about.”