The designer shimmered on stage Saturday night at Philadelphia’s celebrated Academy of Music for The Verizon Philadelphia University Evening of Innovation. 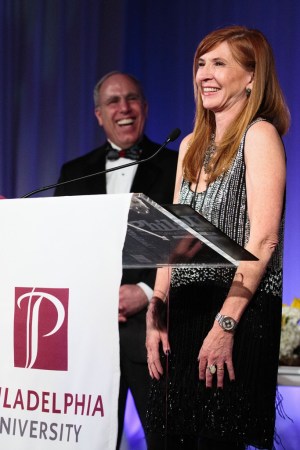 PHILADELPHIA — Nicole Miller shimmered on stage Saturday night at Philadelphia’s celebrated Academy of Music for The Verizon Philadelphia University Evening of Innovation, where she received the university’s 2013 Spirit of Design Award.

Philadelphia University president Stephen Spinelli Jr. opened the night with a video montage replete with Nicole Miller runway reels and red-carpet images of celebrities in her signature form-fitting wares. Bud Konheim, Nicole Miller’s chief executive officer, who won the university’s 2013 Leader of Innovation Medal (which was awarded at the gala later that evening), appeared in the video and spoke of his long-standing partner.

“Nicole is absolutely appropriate for this honor,” Konheim said of Miller. “I mean, look at her fabric innovation. Her latest thing is her stretch metal. It’s a body-camouflage fabric that she’s morphed into plaids and prints. And what about silk noil? It’s the silk scrap that used to fall on the factory floor. She found a way to take those scraps and weave them into a fabric. It was an incredible innovation,” he said with reverence. “A true designer hates the status quo,” he said of Miller’s perpetual ambition to innovate. “Actually, a true designer hates what she just did,” he laughed.

When the video wrapped, Miller came on stage to thunderous applause from the 2,300 students and socialites in attendance. Wearing strappy sky-high, platform prototype shoes that she divulged were from a new licensee (Miller said they’d be in stores in six to eight months’ time, and it was learned the licensee is Antebi), she graciously accepted the honor saying, “I feel like I won the Oscar.”

As for the award itself, “I like the fact that it’s not so much a design award as it is an innovation award. And that’s my strong point,” said Miller. “I’ve always been innovative with technique, my clothing, my fabrications. I’m the first to embrace the new technology, and I’m always really open to innovative ideas. I always feel like those random experimental ideas always look so new that they often turn into something,” she mused.

When it came to advice for the eager graduating class, Miller was to the point. “Don’t get caught up in this world of working in the backroom for celebrities. I’m sure there are going to be a lot of offers for a lot of money to work on so-and-so’s brand of shoes or dresses or whatever. It’s easy to get sidetracked, but don’t. Work hard and stick to your ultimate dream, your purpose,” she advised emphatically.

After Miller accepted the award, she joined Konheim as they watched the capstone fashion show that followed. Student designs ranged from a crop top showing a Rorschach-like skull to a Baroque-inspired autumnal collection of luxe neutral-colored separates, which won Best of Show. The winning collection, designed by Sarah Fitzgerald, also won the Frank Agostino Eveningwear Award for Excellence in Design and Execution; the Chico’s Award for Design Excellence, and Best Senior Collection.