Tomoaki Nagao will pursue different projects, including the development of his new clothing brand, Human Made, and a retail venture called Cold Coffee.

By Kaname Murakami and Chikako Ichinoi on June 10, 2013
View Slideshow 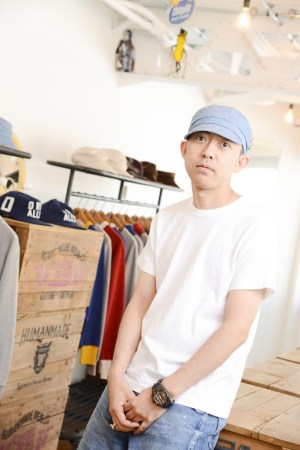 TOKYO — Streetwear impresario Nigo is stepping away from A Bathing Ape, the brand he founded 20 years ago, to pursue different projects, including the development of his new clothing brand, Human Made, and a retail venture called Cold Coffee.

“This year is a year to learn, and I am sure we will be able to announce something pretty exciting next year,” Nigo, whose real name is Tomoaki Nagao, told WWD’s sister publication, WWD Japan. “I feel like a blank slate, just like this T-shirt,” he said, gesturing to the white T-shirt he was wearing at the interview.

“In Japan, fashion has started to become bland, people have stopped caring. That is another reason I want to go international,” he said.

Hong Kong-based retailer I.T Ltd. bought 90 percent of Nowhere Co., the corporate parent of Japanese street label A Bathing Ape, for 230 million Japanese yen, or $2.8 million at current exchange, in early 2011. That was a modest sum for a loss-making business. I.T restored A Bathing Ape to profitability within six months of buying it by restructuring the business and shifting much of its production to China from Japan. The brand recently celebrated its 20th anniversary.

At the time of the deal, I.T said that Nigo would serve as a creative director of Nowhere for an “initial period of two years,” overseeing product design and brand direction. That contract expired earlier this year. On May 25, Nigo revealed on his blog that he had stepped down as creative director of A Bathing Ape, or Bape as it is often called.

Here, WWD Japan catches up with Nigo and talks about his decision to leave the brand he founded.

WWD: Why did you choose to leave A Bathing Ape, the very brand you started? When did you make the decision?
Nigo: It was about six months ago that I started to think about what I wanted to do next. I guess it’s just me being selfish. It has been 20 years since I founded the brand, and in another 20 years from now I will be 60. I started fumbling around for some new possibilities. What I really want to make clear is that I didn’t fall out with [I.T chief executive officer] Sham Kar Wai. Sham and I get on as more than business associates and we came to a mutual decision. It was simply that I came to the realization that Bape was no longer just my creation and I didn’t renew the contract that I signed two years ago when I sold the company.

WWD: Since I.T bought the company, the brand has changed significantly. I.T has launched a diffusion line called Aape by A Bathing Ape and there are many more products with prominent logos. Isn’t that a departure for the brand?
Nigo: I think it is pretty obvious that from the perspective of I.T, they weren’t just buying a brand, they were looking to turn a profit. But I am very grateful to them, not only for buying the company, but for listening to my input. Two years ago when I sold it, times were really tough. We were really feeling the effects of the Lehman Bros. collapse and the banks just weren’t lending. The decision to sell was to protect us, our employees and even the banks. It was the best decision for us all to make it out alive. Actually, we were having talks with a number of people at the time, not just I.T, but those all faltered leaving I.T as the only buyer. Thanks to I.T, it was like I had stepped on a land mine but, thankfully, it hadn’t gone off. After the sale, I learnt a lot from I.T, especially about how to keep costs down, which looking back on my time as manager, was the thing I needed to reevaluate the most.

WWD: Do you think that without you Bape is going to change even more significantly from now on?
Nigo: There is a hangover caused by my own time managing Bape. That without me the brand wouldn’t exist is something the people who follow in my footsteps will have to overcome. But I think that I.T is confident that it is going to continue to sell without me. Especially in Asia, Bape is Bape. There are people who are fanatical about the logo alone. Maybe it will have an effect in places in the West like New York where I have an identity as Nigo. As for Japan, I wonder? I have a feeling they will just have to push on. If something goes wrong, maybe they will call me back!

WWD: So, where will you go from here? Aside from Nowhere, you have your own company, Nigold, which produces your new clothing brand Human Made. Will this be the second incarnation of Bape?
Nigo: Human Made is a brand that makes the clothes I want to be wearing right now, but I have no intention at all of growing it to the level of Bape. Two years ago, I opened a shop for Human Made in [the Tokyo residential neighborhood] Sendagaya that only opened on the weekends called Cold Coffee. I am in the process of renewing the interior of that and I am going to put on sale some of my collection of vintage items. I want to go back to doing business over the counter the old school way. I rent two or three locations for my collection and gradually have just wanted to let go of it all. I want to make a shop disguised as an art gallery with all of things I have collected on display for sale. I have no intention of going back into high-risk business.

WWD: So what else will you do?
Nigo: Firstly job hunting. Recently I have been travelling around the world to places like Europe, Los Angeles, New York and Hong Kong, meeting up with my friends like Pharrell Williams and Tyler, The Creator. From my 20 years of experience I want to attempt something international. Ideally, maybe I want to be like [industrial designer and creative] Kashiwa Sato? More than making something from nothing, I want to improve on things we have already. From a financial perspective maybe the risk is lower, but there is more pressure on me.

WWD: Will you be designing any clothes outside of Human Made?
Nigo: Of course I am interested in both casualwear and suits. Contractually I haven’t been able to design outside of Human Made for the last two years, but I have had offers. However, in Japan, fashion has started to become bland, people have stopped caring. That is another reason I want to go international. Even though it already has a lot, Asia is greedy for fashion, but I just want to dress casually.…This year is a year to learn, and I am sure we will be able to announce something pretty exciting next year.