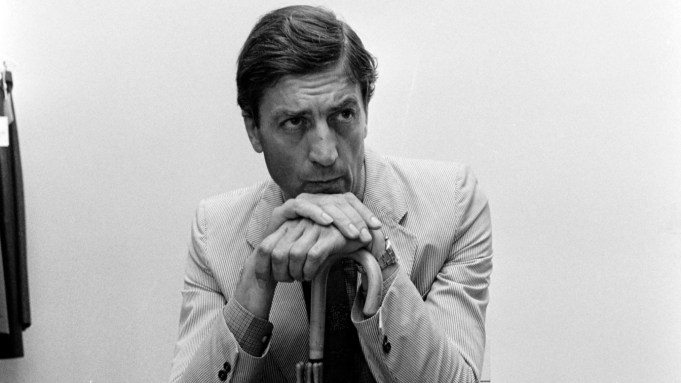 MILAN — Nino Cerruti died on Saturday at age 91 following complications from a surgery, a spokeswoman for Lanificio Fratelli Cerruti said.

Cerruti, who was born in Biella, one of Italy’s main textile hubs, was a key figure in the international fashion industry, well-respected and known for his elegance, kindness and polite ways.

“For the family, collaborators, friends and management of Lanificio Cerruti and for Italian fashion today is a sad day because with the death of Mr. Nino the world loses a man of talent, an extraordinary designer, a visionary ahead of his time and a great mentor to whom many are indebted,” said Lanificio Fratelli Cerruti in a statement.

“Today, we have lost the epitome of a true gentleman, a man of talent, a revolutionary designer, a man in advance of his times, a philosopher of the garment, an extraordinary mentor, to whom the whole fashion world owes so much ever since he created his Maison in Place de la Madeleine in 1967. This is where he designs the deconstructed jacket, and invents the famous ‘casual chic,’ favoring the movement and the natural elegance of the wearer to statutory clothing,” said the Cerruti 1881 company in a statement. “A great sportsman, avant-garde and visionary, Nino has applied this philosophy of freedom in clothing to all areas, from cinema to sports, up to accessories, and perfumery — creating the iconic 1881, to become a strikingly contemporary style and art of living. Grazie Signor Nino, Rest in Peace.”

His grandfather had founded a textile mill in Biella in 1881, the Lanificio Fratelli Cerruti. Drawing from his experience in producing excellent fabrics, Cerruti ventured into the production of clothing in the late 1950s.

His first men’s collection, Hitman, was shown in 1957 and was considered revolutionary in men’s wear at the time, as Cerruti is credited as the first to create the deconstructed jacket for men.

The Cerruti men’s wear line was launched in 1967 and it was to be followed by a women’s wear collection a year later.

The first Cerruti boutique opened in 1967 in Place de la Madeleine in Paris, where Cerruti moved the company’s headquarters in order to be closer to the international fashion capital. The fabric production under the name of Lanificio Fratelli Cerruti and the Hitman label remained in Italy.

Cerruti, Lanificio Cerruti of Biella and Hitman, based out of Corsico, together formed Fratelli Cerruti, the Cerruti Brothers group.

He had an eye for talent as he tapped Giorgio Armani in 1964, who worked with Cerruti until 1970.

“It is with great sadness that I learn of Nino Cerruti’s death,” said Armani. “Although over the years we had seen less of each other, I have always considered him one of the people who have had a real and positive influence on my life. From him I learned not only the taste for a sartorial softness, but also the importance of an all-around vision, as a designer and an entrepreneur. Mr. Nino was a keen observer, he had a real curiosity and the ability to dare. His gentle way of being authoritative and also authoritarian will be missed.”

Carlo Capasa, chairman of Italy’s Camera della Moda, defined Cerruti “a great innovator and a visionary entrepreneur. He was also one of the chicest Italian men, he was kind and polite, a true gentleman.”

Capasa underscored that Cerruti was “the first to understand the importance of creativity in men’s fashion and to give space to a young designer of immense talent such as Giorgio Armani in order to change fashion’s criteria. He was one of the first to have such a strong international clout that could be representative in the world of that unique blend of creativity and quality that went on to characterize — and still does — Italian fashion.”

“Nino Cerruti was undoubtedly a creative genius, a passionate man with an extraordinary eye, but also a great entrepreneur,” said Ralph Toledano, president of the Fédération de la Haute Couture et de la Mode. “Nino Cerruti introduced the notion of “casual chic” into fashion and men’s clothing, and was himself a man of rare elegance. Today we say goodbye to a great man who belonged as much to Milan as to Paris.”

Renzo Rosso, founder of the OTB group, which controls the Maison Margiela brand, recalled that label’s partnerships with Cerruti Baleri. “As the visionary man and enlightened entrepreneur that he was, Nino Cerruti understood — the first before many others — the strong connection between fashion and design. For several years Maison Margiela collaborated with Cerruti Baleri, a jewel in the crown of Italian furniture companies, realizing iconic collections with pieces such as the famous Emmanuelle chair or the small lopsided table. I remember him as an extremely elegant man, but curious and young in spirit. An icon of Italian fashion.”

Jason Basmajian, chief creative officer of Cerruti 1881 in the 2015-2019 period, said “Nino was a gentleman with old school manners, a curious mind, and a very modern perspective. He was a visionary designer far ahead of his time quietly inventing a relaxed effortless style focused on beautiful cuts and innovative textiles. His powerful clothes were always relevant and fresh yet somehow timeless. He gave a soul to garments. He paired T-shirts and trainers with suits far before it was a trend. His relationships with Hollywood and the film industry were based on real friendships long before social media and paid placement. He taught me to design first for yourself and never to be distracted by the whims and trends of the fashion system. He was a kind, humble and intelligent man who was always so supportive of my work and willing to give constructive guidance. Nino will remain a legend — knowing and working with him was an honor.”

“I was 18 years old when I started my career at Nino Cerruti — the same office, the same desk where Mr. Armani started, too,” said designer Stefano Pilati, who would go on to design for brands including Miu Miu, Yves Saint Laurent, Zegna and his own fashion project, Random Identities. “‘Il Signor Nino’ was the first to teach me how to create sophisticated fashion, defining men’s wear with a constantly evolving sense of style,” Pilati added.

“I first met Nino Cerruti as a young buyer for Louis of Boston and remember how in awe I was of this charming and handsome designer,” said Joseph Abboud. “I later got to know him after I launched my first Joseph Abboud collection when he would often visit my store on Newbury Street in Boston with his son. Nino was a pensive, intelligent men’s wear designer who valued good taste over sensationalism…style over fleeting fashion trends and he did it all with his signature grace and humility. A true gentleman in every sense of the word…he made the world of men’s wear a better place. I will miss him and be forever grateful for his wonderful contribution to our industry.”

“Cerruti was one of the great entrepreneurs of our times. A visionary, a person with acumen and never banal, a brilliant designer. He’s gone with part of our history,” said Giovanni Vietti, president of the union of Biella industrialists. “He turned Biella into a famous spot in the textile world. It’s an immense loss for all of us, humanly and professionally,” he added.

“The textile and fashion world just lost a pivotal figure that was able to turn Biella into a globally recognizable place. Thanks to his genius and creativity he jump-started brands and helped establish the career of many successful designers. His death marks the departure of a big portion of the Made in Italy history,” said Alessandro Barberis Canonico, CEO of the Biella-based Vitale Barberis Canonico textile firm and president of Milano Unica.

“Nino Cerruti was one of the founding fathers of ready-to-wear, he managed to take his name and that of his family around the world. Everyone who got to meet him was struck, not only by his charm, but also by his culture, curiosity and passion,” said Ercole Botto Poala, CEO of fellow Biella-based wool mill Reda. “I was always intrigued and fascinated that at a time when everyone is demanding titles, he was always only referred to as Signor [Mister] Nino, the most difficult title to achieve. He was a true gentleman,” he added.

Cerruti’s first play in beauty was in 1979 with the launch of Nino Cerruti Pour Homme. Various licensees, from Elizabeth Arden to Coty Inc., have produced fragrances under the license for men and women, including 1881 Cerruti and 1881 Men Cerruti.

Designer Parfums acquired the license after Coty’s agreement with the brand expired in 2018.

Dilesh Mehta, Designer Parfums’ founder and CEO, defined Cerruti “a true visionary,” saying he “imposed a new approach of dressing, favoring the true inner personality of the wearer rather than his status, inspiring an entire new generation of [designers]. At Designer Parfums, we are extremely proud to be partnering with the Cerruti fashion house, perpetuating this forerunner vision and accompanying the changes in society in the field of fragrances. His words at the time he created the fragrance 1881 pour Homme, over 30 years ago, stand true to the universe which he captured in his iconic bottle: ‘the scent that I wanted to put in [it] …. the wood, the fresh grass, the humus, the joy of the Italian countryside in springtime…. I also had in mind the scent of apples gathered in for winter, laid on straw-covered racks, a balmy scent that made the head spin! If I shut my eyes, I can still capture that particular smell.’ Nino’s legacy will forever be with us. Rest in peace.”

In October 2000, in an effort to secure global expansion, Cerruti sold 51 percent of his company to the now-defunct Fin.Part, which would less than a year later buy the rest of the company and force the designer out after irreconcilable differences.

“There was a perpetual conflict of interest,” Cerruti said later. For this reason, the last collection designed by Cerruti was for spring 2002.

In 2000, Cerruti received the Cavaliere del Lavoro, or Knight of Labour, honor, one of the highest recognitions bestowed by the president of the Italian Republic.

After Fin.part’s bankruptcy in 2005, Cerruti was sold to the American private equity firm MatlinPatterson, but the brand was once again sold to China’s Trinity Ltd. in 2010. As reported, earlier this month Trinity was put into liquidation.