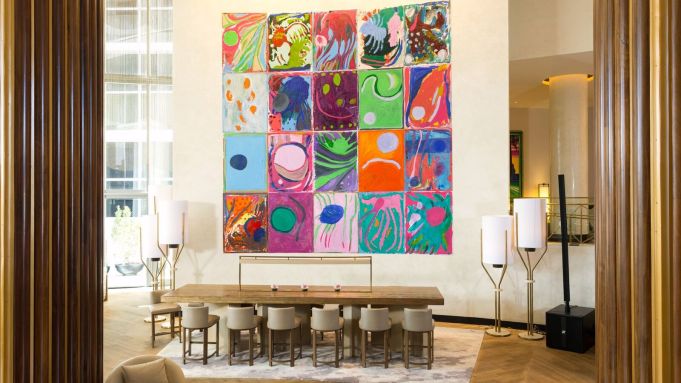 The Eden Roc Miami hotel has a new resident, and they’re not planning to check out. Opening this fall, Nobu Hotel Miami Beach will launch as a hotel within a hotel concept at Eden Roc. The project is a collaboration between chef Nobu Matsuhisa, Robert De Niro and producer Meir Teper, and will feature 206 guest rooms, a spa, and outpost of California restaurant Malibu Farm. It will be the second hotel to open under the Nobu empire. Originally designed by Morris Lapidus, the hotel is undergoing an extensive renovation by David Rockwell.

And in case you miss the next Art Basel Miami Beach, you’re in luck. Teper asked his friend, art collector and advocate Peter Brant, to curate a museum-quality art collection for the hotel. The Brant Foundation loaned a selection of contemporary works by artists such as Julian Schnabel, Richard Prince, Kenny Scharf, Enoc Perez, Nate Lowman and Ryan Sullivan. “We chose artists from the collections that connected well together and works that would complement each other in a Fifties landmark Lapidus building,” Brant said of the partnership.

The hotel also commissioned Josh Smith for a permanent site-specific artwork. He created “Florida Set,” a brightly colored patchwork style painting that will hang in the hotel’s lounge. “The forms and vibrant colors allude to the sky, the sun, the underwater world, and to us living our lives,” Smith writes of the piece. “Some parts of the painting invite contemplation, while others project energy. Florida Set is an abstract painting. It is yours to interpret.”

RELATED CONTENT: Bulgari to Open Hotel in Moscow in 2019 >>