Number 5: Dance of the Designers

The revolving doors in Paris ateliers inspired a stellar season. 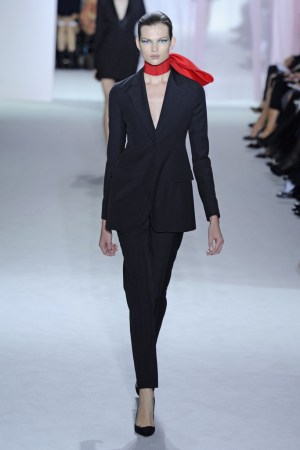 PARIS — While some believers in the Mayan Long Count Calendar view 2012 as the end of the world, followers of fashion observed new beginnings for a host of talents at the highest levels of European fashion.

Two of the most storied and prestigious couture names in France — Yves Saint Laurent and Christian Dior — welcomed new designers, setting the stage for one of the most electrifying Paris seasons in years, and Jil Sander returned to once again helm her namesake house after an eight-year absence.

Balenciaga also went for change, naming Alexander Wang its new creative director after parting ways with Nicolas Ghesquière, who logged a stellar 15-year tenure at the house and will no doubt resurface soon, either launching a signature brand or landing at another famous brand.

The seismic changes began erupting during Milan Fashion Week in February, when acclaimed designer Raf Simons was ousted as creative director at Jil Sander to make way for the return of its founder, and when YSL confirmed that Hedi Slimane — who ignited Dior Homme during a seven-year stint and then devoted himself to photography for five years — would return to fashion design and become its new creative director.

The latter appointment was widely applauded, particularly by YSL stalwarts like Pierre Bergé and Betty Catroux. It was indeed a second coming: Slimane had been the acclaimed designer of Yves Saint Laurent Rive Gauche Homme in the late Nineties.

The development displaced Stefano Pilati, who had succeeded Tom Ford at YSL and helped the firm climb out of its debt hole and become a top-of-mind resource for leather goods and footwear.

It was an elegant transition, with Pilati offering his best wishes to Slimane — and landing on his feet a few months later with a plum appointment: He starts Jan. 1 as creative director of Agnona, and head of design at Ermenegildo Zegna, with responsibility for that brand’s fashion show as well as for the Ermenegildo Zegna Couture collection.

Simons’ arrival at Dior came after a protracted search. The French house is said to have considered several candidates — and contemplated moving Marc Jacobs over from Louis Vuitton — before ultimately settling on the Belgian design star, prized for his devotion to modernism and freewheeling approach to minimal design.

A host of designers, including Alber Elbaz and Jacobs, turned out for Simons’ Dior couture debut last July, staged in a townhouse wallpapered with a million fresh flowers.

But the ready-to-wear shows in late September were the main event, with many designers raising the bar on their productions and collections so Slimane and Simons would not steal all the thunder.

Chanel had 13 wind turbines churning over its runway at the Grand Palais, and Miuccia Prada pulled in a bevy of hot actresses for her front row, including Emma Stone, Amanda Seyfried, Felicity Jones and Dianna Agron.

And there were other standout shows, including Dries Van Noten’s ode to grunge, and Jacobs for Louis Vuitton, who had models arriving and exiting in twos on escalators in perfect precision.

Fashion’s revolving door also swung at Azzaro, which said in October it was parting ways with its creative director, Mathilde Castello Branco, after a two-season collaboration. A successor has yet to be named.

Vionnet also bid adieu to its creative directors Barbara and Lucia Croce after a less than a year, and the brand’s majority owner, Goga Ashkenazi, has taken on the role of chairwoman and creative director. And Christopher Kane parted company with Versus, as Donatella Versace plans to design the collection in collaboration with various young designers and stylists.

According to Paris-based industry consultant Jean-Jacques Picart, it’s no coincidence that studios have been in so much flux.

“Since 2008, the entire world is changing faster and faster. When the world changes, fashion changes too,” he said. “Consumers have already changed their relationship with the offers of the brands. They don’t buy the same way as before. Their desire is no longer excited in the same way and with the same formulas. And when the desire is more difficult to create, the brands are asking to themselves if their designers are still the most capable to create desirable collections.”

Paco Rabanne, Leonard, Cerruti, C.P. Company and Rena Lange were among other European names that had designer comings and goings.