The designer's presentation at the Algus Greenspon Gallery on Sept. 5 will be among one of the smaller venues in which his designs have made their debut. 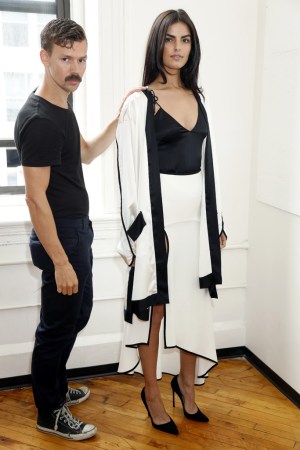 When Adam Selman launches his collection Sept. 5 at a presentation at the Algus Greenspon Gallery during New York Fashion Week, it will be among one of the smaller venues in which his designs have made their debut. As Rihanna’s primary costume designer for the past two years, Selman’s work has not lacked for exposure, even if he has labored somewhat anonymously. Rihanna has 31.2 million followers on Twitter and 9.4 million on Instagram, where she regularly posts suggestive selfies that show off custom pieces by Selman, such as the barely there bikini — which featured a bejeweled cage for her breasts — she wore earlier this month during Carnival in her native Barbados. “The crazy thing is that every girl from 18 to 30 is wearing a costume like that,” said Selman, who accompanied Rihanna on the trip. “It wasn’t as scandalous as it looks in pictures, but after going and seeing Carnival, the bikini that I first made for her made a lot more sense.” He was referring to his first design for the singer, a Swarovski Elements bikini that looked like candy that he worked on with Tom Binns.

This story first appeared in the August 28, 2013 issue of WWD. Subscribe Today.

Not coincidentally, Selman is obsessed with swimwear because it can be “a little bit more ridiculous.” There’s a swim component to his spring collection, worked in a wearable way, along with soft lingerie and athletic references. There are boxy tops based on hockey jerseys, sweatshirts and pretty satin pastel robes and slip dresses. A kicky cotton twill skirt is paired with a matching jacket. Two of his main points of reference are the 1981 HBO special on supermodels called “Beautiful Baby, Beautiful” and the soft-focus sexpot glamour of Seventies Francesco Scavullo Cosmopolitan magazine covers. “It’s sexy. It’s that fantasy woman but it’s also sporty,” said Selman, surrounded by examples of vintage Cosmo covers, the models tan, toned and mostly clad in some form of spandex. “I really respond to that.”

Selman grew up primarily in Texas, in a “superathletic household.” He and his sister were cheerleaders, his brother played baseball and basketball and his dad coached. He moved to New York 13 years ago to study at Pratt, and eventually took a freelance design job with Zaldy, working with him on L.A.M.B. and celebrity tours, which included Lady Gaga’s Monster Ball and Michael Jackson’s ill-fated This Is It tour. When Mel Ottenberg was called to style Rihanna’s 2011 Loud tour, he brought in Selman, his boyfriend of five years, to help. “I thought it was just a tour — ‘Great. So much fun,’” said Selman of working with Rihanna. “And then she just kept calling and calling, ‘Do you want to make me this?’” She’s kept him steadily busy for two years straight with the 777 Tour, promoting Unapologetic and the Rihanna for River Island collection, a two-season line for the high street retailer, for which Selman served as head designer. It was that project that got him thinking about officially doing his own thing.

Used to operating under 48-hour deadlines for celebrity requests, Selman worked quickly, putting his own line together in two months with New York factories with which he had established relationships. Ottenberg is styling and Jen Brill is working as creative consultant. Selman hasn’t determined pricing exactly; he wants it to be “accessible,” around $400 retail for a dress. He plans to start small with distribution: Opening Ceremony, Net-a-porter and Barneys New York are on his wish list. “I would hate to do something that I can’t manufacture,” he said. “That would be my worst nightmare.”