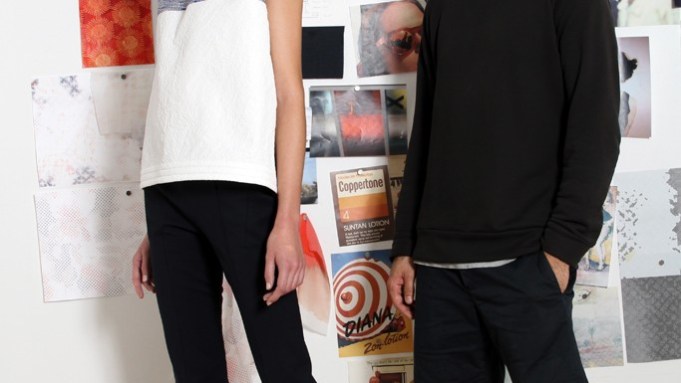 Chris Gelinas started his foray into fashion with what he called “a little white lie.” While still a business student at the University of Windsor in his native Canada, Gelinas applied for an internship at Marc Jacobs in New York. In a phone interview, he told the Marc staffer that he was actually in fashion school. It worked.

“I showed up and didn’t even know how to thread a needle,” the designer said last week in his Garment District studio, where he’s been working on his label CG’s launch collection. “It was spring ’06 at Marc — the collection with the marching band — and after that show, I was hooked.”

Gelinas returned to Marc Jacobs for a second internship in the public relations department, and was offered a job as an assistant buyer at the company. He jumped at the chance, although “The whole time I was doing the buying, I was really just sneaking away into the sample room and watching Marc style.”

Jazzed by the creative side, he enrolled at Parsons The New School for Design to study fashion, took an internship at Proenza Schouler, and then relocated to Paris for an apprenticeship at Balenciaga, where he worked with Natacha Ramsay, then Nicolas Ghesquière’s first assistant at the label. “For me and my design process, that is what changed everything,” he said. “The way they design, the rigorous research, the fabric manipulation…always pushing it to the next level. It inspired me to want to investigate technical innovations, and really working with fabrics before considering silhouettes and sketching.”

While in Paris, Gelinas also met with Olivier Theyskens, who later hired him as his first assistant at Theyskens Theory, where he spent the next two-and-a-half years until he started working on his launch, which he will present with appointments at his studio during fashion week.

His first collection makes an impressive case for combining innovative fabrics and technology with classic, feminine shapes. He started spring with thoughts of the sun and sun protection, and evolved these into a more general theme of protection versus exposure and vulnerability. Many of his pieces have a faded quality to them as if bleached by the sun.

Among the highlights is a chic tea dress in a lightweight techno shirt fabric with a collar made from hand-painted laminated horsehair bonded with nylon. Another top look— a white cotton jacquard tank top, its fabric resembling a crisp beach towel. Gelinas is also working with Düsseldorf, Germany-based company Nucleus, which uses ultrasonic seam-welding to create near-seamless garments.

The domestically-produced collection is priced from $500 to $1,095 for basics, including tops and pants, and $1,195 to $4,000 for dresses, jackets and outerwear. Ideally, the collection will launch with smaller specialty stores that, rather than pile on the merch, tightly “curate” their offering.

Asked for his design philosophy, Gelinas is as interested in technology as silhouette. “Sewing machines have been around since the industrial revolution and that hasn’t changed much, but I think that there are some really interesting new technologies,” he said. “I like to think about the ‘how’ we make clothes, not necessarily just what we make, because I really think that’s the future.”